It’s time to take stock of all the promotions, demotions and shuffles that we saw in 2021. After a year in which many held onto their positions in troubling times, our industry saw much more movement this past year, resulting in a great many leadership changes in Asia-Pacific.

Without further ado, let’s see where the musical chairs took us in 2021 and make a few really bad puns along the way. 
Accenture Interactive (AI) turned heads when it acquired Droga5 in 2019, with many predicting a culture clash between consultancy and creative hot shop. Two years later, rock star creative David Droga took over the reins from a retiring Brian Whipple to be named CEO and creative chairman of AI in September.

In Asia-Pacific we’ve seen an accelerated investment in creative capabilities, including the launch of Droga5’s first Asia office in Tokyo in May led creatively by CCO Masaya Asai, who left his role as global creative director at TBWA Hakuhodo a month prior. AI also acquired Malaysian full-service agency Entropia, founded and led by Prashant Kumar, who says he will remain with the agency for at least the next three years. Finally AI’s Australian creative shop, The Monkeys, expanded to New Zealand with former DDB leader Justin Mowday as CEO and Damon Stapleton as CCO. 
Diversity, equity and inclusion principles remain an important part of marcomms hiring and staff management worldwide, so it’s only natural that many of the key hires from agencies involved leaders who can help bring about more change.

Globally, we continued to see more diversity officers and DEI heads appointed, such as Nancy Lengthorn at MediaCom, Natasha O’Dell Archer at Golin, and Vanessa Vining at VaynerX.

And this year we began to see some networks invest in regional roles. Dentsu International appointed Rashmi Vikram, formerly group diversity and inclusivity practice lead at Microsoft, as its chief equity officer in APAC.

Mediabrands, meanwhile, brought in global inclusion and diversity (I&D) specialist Dharesheni Nedumaran from Swire to a newly-created role as head of diversity, equity and inclusion (DEI) across Asia-Pacific. 
We all know the degree to which Meta and Google dominate the advertising market, so when key Facebook/Meta leaders such as ad chief Carolyn Everson and chief creative officer Mark D’Arcy leave, the industry takes notice, as it also did with the hiring of RGA's former head of global client partnerships and former CEO of Saatchi & Saatchi New Zealand, Nicky Bell, to be vice president of Facebook Creative Shop, the company's in-house creative strategy team.

In Asia-Pacific, both Facebook and Google were on the hunt to fill their regional Singapore-based head of agency positions as Neil Stewart and Joanna Flint both left their roles within Facebook and Google, respectively. Flint later resurfaced as the new chief commercial officer at Mandarin Oriental, with Google hiring former Singapore Press Holdings executive Linda Lim as its new APAC agency business lead. Stewart’s replacement at Facebook, meanwhile was the surprise hiring of former Wunderman Thompson and Digitas APAC CEO Annette Male. In 2020, China and Australia were often singled out as tough markets for retaining business activity.  In 2021, we saw more top leadership changes in these markets than any others. Who won the battle? By our count it's China by far.  Among the headlines of Chinese agencies adding new leaders this year:

Meanwhile, the land of kangaroos saw the following CEO switcheroos: 
After pulling the plug on its APAC leadership structure in 2019, Havas relied heavily on India, Southeast Asia and North Asia chief Vishnu Mohan for regional presence. So when it was announced in January that Mohan was stepping down after 25 years with Havas, it was decided that India would report directly to global HQ while Southeast Asia and North Asia remits have been handed over to Havas Group’s growth markets leader, Alberto Canteli Suarez, based in Dubai. Already in charge of markets in the Nordics, Central Europe and Eastern Europe, including Russia and the Middle East, Canteli is now cramming even more diverse markets into his remit such as Singapore, Japan, Korea, Malaysia, Philippines, Indochina, Indonesia and Vietnam. Mohan has since set up his own holding company, invested in a Philippines-based agency and recently announced he would lead APAC expansion for Amsterdam-based agency Dept.

In another significant shift this year, Karl Wu, co-chairman and CEO of Havas Group Greater China is to take over the management of the region after current chairman Mason Lin announced his plan to retire at the end of 2021 after 30 years with the company. 
2021 was also a big year for CMO changes, notably affecting the composition of Campaign Asia's Power List of the 50 most influential marketers.  This year, several CMOs from the class of 2020 switched jobs and therefore did not make it into this year's list: Wonhong Cho was replaced at Hyundai Motor; Jaskaran Singh Kapany quit as Paytm's CMO to join Xiaomi as head of marketing in India; and Frederique Covington Corbett was promoted to a global at Visa, allowing Danielle Jin, Visa's VP and head of marketing for Greater China, to replace her on the list in 2021.

Meanwhile, our 2021 Power List has lost some heavyweights as well. Unilever media chief David Porter is set to retire in 2022, Chang Chee Pey is replacing Lynette Pang as STB's marketing head, NTUC Income's Marcus Chew is replacing Mary Zhou as Lazada CMO and YoeGin Chang has left SK-II for a global role at La Mer. Meanwhile, Eugene Lee at McDonald's has bolstered his standing with a promotion to Asia CMO. 
At the APAC leadership level this year we saw several notable reshuffles. One of the major ones was at McCann where APAC chief Alex Lubar was moved to lead North America, passing APAC oversight on to Ghassan Harfouche's MENA/Turkey remit. In a similar vein Wunderman Thompson also saw APAC oversight passed outside the region to EMEA's Ewen Sturgeon following Annette Male's departure.

On the media side, the most signicant departure this year saw veteran regional leader Stephen Li step down as the APAC chief of OMD. Mediabrands also made a couple of changes, including hiring James Smyllie as APAC president of Initiative and replacing Ben Poole at Reprise (who later joined You&Mr Jones' Fifty-five). Meanwhile, at VaynerMedia, Tim Lindley was promoted to the APAC MD role as Avery Akkineni returned to the US after launching the agency in APAC two years ago.

3. Out of Sight, out of Mindshare
Out and about: Amrita Randhawa
In: Helen McRae 
One of the year's most impactful moves saw long-serving Mindshare chief Amrita Randhawa jump ship to join Publicis Groupe as CEO for Southeast Asia. Randhawa had been Mindshare's APAC CEO and its executive chair for Greater China since early 2018, prior to which she was the agency's Greater China CEO.

With the move, Publicis Groupe became home to arguably two of the most respected female leaders to emerge in the region in recent years, with Randhawa's SEA role mirroring Jane Lin-Baden's position as North Asia CEO (Lin-Baden is also managing partner, APAC).

By late July, the GroupM agency announced its APAC CEO replacement in Australian Helen McRae, who had been serving as Mindshare's EMEA and Worldwide Team CEO. 
In recent years, Dentsu has come to feature prominently in these annual annals, mostly notably in 2019 when it earned the unwelcome moniker of 'Dentsu Aexit Network' due to a veritable purge of regional network leadership. But with Dentsu Aegis Network now relegated to the pages of history and Dentsu's corporate restructuring seemingly wrapped up, one might have thought the endless management restructuring at Dentsu might finally be done.

But alas, not to be outdone Dentsu once again came through this year with a fresh surge of purge, starting in the summer when Dentsu India CEO Anand Bhadkamkar became the latest in a slew of exits in India, including Gautam Mehra, APAC chief data and product officer; Rubeena Singh, CEO of iProspect India; Vivek Bhargava, head of Dentsu Performance Group; and Agnello Dias, Dentsu India's creative chairman.

In August, Jean Lin was appointed an executive officer of Dentsu Group, but even bigger changes were afoot. In November another shoe dropped as Dentsu Group announced that after five years as CEO, Toshihiro Yamamoto would retire from the role, effective January 1, to be succeeded by Hiroshi Igarashi, current president and CEO of Dentsu Inc., the company responsible for Dentsu's domestic operations in Japan. In other changes, Tim Andree is now slated to retire from an executive role to become non-executive chairman of the board following Dentsu's annual general meeting in this coming March. Another notable change saw Norihiro Kuretani step into the role of president and CEO of Dentsu Japan Network from the position of director, executive vice president of Dentsu Inc.

Meanwhile, the moves coincided with the retirement of Ashish Bhasin as Dentsu APAC CEO and India chairman. The Indian operations of the agency will be handled by Peter Huijboom, global CEO, media and global clients. The APAC business will be handled by Simon Jones, APAC CFO and Belli Mathanda, APAC COO.


1. The great resignation
Out: Those wanting more freedom and flexibility in work-life balance 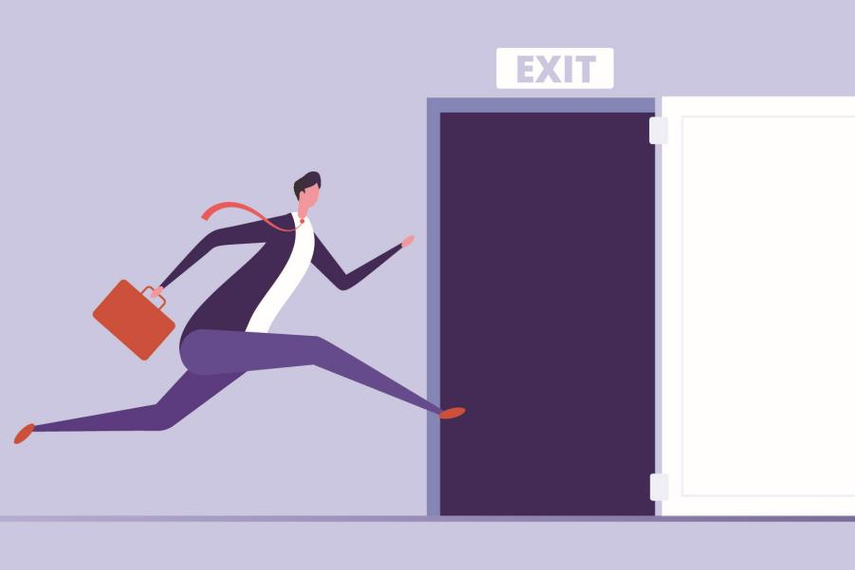 While employee attrition has always been an industry bugbear, Covid not only 'forced' people to work from home, but also to re-examine their lives and workplace values. And in the process, many came to the conclusion that grinding out late office hours was not what they wanted in life, so they sought more control over their careers. The result was 'The Great Resignation', a raft of departures from marketing jobs at agencies and brands in favour of freelance opportunities and more flexible arrangements.

This phenomenon is undoubtedly the year's biggest and most significant exit for not only leaders, but talent throughout the marketing industry.

Top exits and entrances of 2020