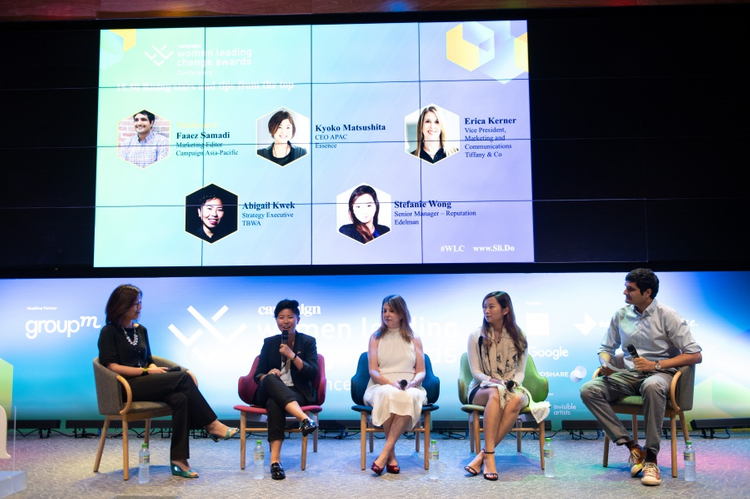 Edelman's Bob Grove with (l-r) Kauveri Khullar from Mastercard, Natalie Guris from TBWA and Jo Flint of Google discuss how to overcome unconscious bias in the worldplace Campaign's Olivia Parker with (l-r) Will Anstee of Initiative, Vishnu Mohan of Havas Group, GroupM's Anita Munro, Gerry Boyle of Publicis Media, Joanna Catalano of iProspect and OMG's Tony Harradine. The panel looked back at the year since the networks signed Campaign's Mandate for Change on gender equality

The Women Leading Change conference, which took place in Google's futuristic Singapore headquarters on Friday, was a gathering of senior executives and bright minds from around Asia Pacific to debate the state of gender equality in the media and marketing industry.

The conference kicked off with the results of Campaign Asia-Pacific and Kantar's exclusive survey on the subject, presented by Kantar's Anne Rayner and Trez Chan.

Here are four more topline takeaways from the event.

It is tempting to assume that recent world gender equality movements like #MeToo and #TimesUp would have ushered in a new speed of change on the subject. But in Asia, in the media and marketing industry at least, developments are still painfully slow.

Aside from the hard data put to this subject by the survey, delegates throughout the conference had their own revealing anecdotes about how much—or little—has changed in past decades.

Kyoko Matsushita, CEO APAC at Essence, said she realised while listening to the two ‘rising stars’ on her live mentoring panel, TBWA strategy executive Abigail Kwek and Edelman reputation senior manager Stefanie Wong, that challenges for young women in the industry are "still the same.”

“I was still young and I was Asian in a Western market, so it was the double whammy thing. I went back to Japan to work and it’s a market where women are supposed to behave in a certain way. The first thing I was taught was how to pour a sake properly. I was like ‘I didn’t go to university for this!”

Matsushita worked in product development and planning for Sony and went on to start developing games, a move she said took her into a world of fewer and fewer women, particularly at VP level. She was lucky to have a support system around her, she said, but this wasn’t something available to everyone. It’s informed her determination to always support women and women’s initiatives. “Today I see more women staying longer in their jobs and that’s the change, but more work needs to be done. Such tough learning experiences can be beneficial to overall progress, however. Matsushita’s fellow panellist Erica Kerner, vice president of marketing and communications at Tiffany & Co, described growing up as a “minority” female at Nike, where she used to work, saying even when things were tough, she was able to keep her sense of who she was. “I grew up always having to assert myself and always put myself into uncomfortable situations,” she says. “I felt that as a woman you had to fight just as hard as a man to do the same job.”

A panel of six network leaders, who gathered to discuss the Mandate for Change on gender equality one year on, also shared a few practical insights on what they’ve learned about shepherding in change. Data is important to track progress, but to find out whether new policies are working it is critical to talk to employees, said Tony Harradine, CEO of APAC, Omnicom Media Group.

It’s also about encouraging people to see the benefit of such policies, said Gerry Boyle, APAC CEO of Publicis Media. “If you want people to really learn, they have to want to do it. You need the right education and inspiration about why it’s important to address these issues.”

Anita Munro, MD of GroupM L’Atelier APAC, agreed that one of her top learnings from the last year is that a “grassroots approach” has gained the best traction among staff.

Building your personal brand is crucial

Finding your own voice—and being true to it—was another common strand in several of the day’s discussions, with Torie Henderson, CEO, South East Asia and India at Omnicom Media Group Asia Pacific, calling it “critical, regardless of your gender.”

Barratt discussed her top tips for bringing her personal brand to life in her everyday, citing ‘personal values’ as the key to being true to one’s own voice.

Barratt said that she’d recently received an email that had been sent round her company, congratulating a female colleague on her recent promotion. “The email talked about her age, about ‘having brains with that beauty’. It talked about the fact that she was ‘one of the lads’ and a whole host of other things. I was gutted,” says Barratt. She called the email out, replying to those who’d sent the email with a reminder that the person had got their promotion “because they’re actually just damn good at what they do.”

Values underpin behaviours, Barratt explained: “If you don’t know what you stand for it’s far too easy to get swayed.”

Cultivating ‘the human touch’—or networking—was another of Barratt’s top tips for brand building. She advises networking both internally and externally and making sure you leverage your links once you’ve built them. “If you don’t do anything with the networks, they’re not any value to you. Every week, or every fortnight, identify half a dozen people in your network to meet and look for ways you can add value to them,” she advises.

Bellati—who shared her opinion that while a personal brand is key, it is not more important overall than working out one’s ‘story’—concurred about the value of networking to brand building, with an interesting insight that she sees herself as a “fake expert”. "I am not a good networker. I am a fake extrovert. I've only really turned to networking because I see it as an important tool in pushing my own boundaries, but also because I see it as a way to get things done."

In the wake of the #MeToo movement, even those with the best intentions in tackling sexual harassment at work can forget a simple truth: harassment is an emotional problem. Joanna Catalano, APAC CEO at iProspect, pointed out that implementing procedures to address the issue is only one part of it.

“You can speak about the process, but there’s an emotional side that disappears that is critical,” Catalano said, adding how she was shocked at the Kantar research showing that just 14% of those surveyed said they had reported instances of harassment to their employer.

“The degree to which people feel unsafe to come forward wouldn’t have surprised me 10 years ago, but it surprises me today.” Publicis Media's Boyle said he was “saddened” by the Kantar findings. “We have an emotional contract with people who work for us, that they should come to a safe environment at a very minimum. We've got to put in place conditions so people can feel they speak out.”

For all the good in having strict processes in place to deal with harassment, GroupM's Munro said it was critical to “educate people on what harassment actually looks like,” to encourage greater support for women in the workplace and more reporting of incidents.

In tandem, Vishnu Mohan, CEO of Havas Group SEA, said he has “zero tolerance” for any harassment. Sharing examples of when an agency has dealt with such an issue is also extremely powerful in building confidence in your staff and educating them about the problem, he said.

Find your voice, no-one else will find it for you

A further recurring theme at this year’s event was women under-valuing themselves and not having enough confidence to speak up and take opportunities. While undoubtedly a product of being marginalised, ignored or even abused in a male-dominated workforce over centuries, a rare note of hope at the conference was the sign that more women were finding their voices today than in the past.

“Ladies seem naturally more shy,” said Elan Shou, APAC CEO of Ruder Finn, when the issue of breaking into the so-called ‘boys club’ at the top was discussed. “Men are very vocal; they say anything even if it’s wrong. Ladies, we take too long, so don’t hesitate. When you want to say something, speak out.”

OMG's Henderson supported the issues around confidence and said pressure to conform to stereotypes weren’t exclusively female. “Finding your voice and being true to yourself is critical, regardless of your gender,” she said. “Lot of guys in the workplace who don’t want to be part of a boys club either.

It does seem, fortunately, that the message is getting through to younger women. TBWA's Kwek said having confidence was vital because “the moment you think [as a woman] that your opinion is not as valid, that’s the point you lose the argument”.

Or as fellow rising star Wong, from Edelman, put it: “Be confident, trust yourself and go for it. Get prepared, get your research done and get support from peers. Then do it, and prove it right.”