Let's start the New Year with a nice healthy cleanse by recapping our 27 favorite Facebook outrages of 2020.

1. A glowing article about Facebook entitled “How Facebook Is Helping Ensure the Integrity of the 2020 Election” appeared in Teen Vogue magazine. 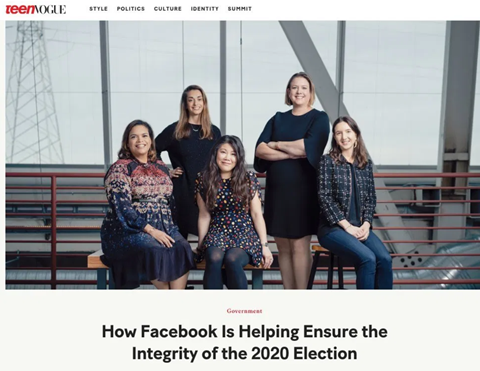 Then the 'editor's note' suddenly disappeared.

Then a byline by a freelance writer suddenly appeared on the article.

Then that freelance writer said she didn't write the article.

Then her byline disappeared.

Then a subscriber to Teen Vogue's Twitter account asked whether it was a real article or an ad. The Teen Vogue social media person replied "Literally, idk" (I don't know.) Then that tweet suddenly disappeared.

2. As reported here last week, Mark Zuckerberg told investors, "My goal for the next decade isn't to be liked but to be understood." Poor thing is misunderstood. Our hearts go out...

3. According to a headline in Business Insider, "A Facebook Employee Reportedly Blow-dried Mark Zuckerberg's Armpits Before He Gave Speeches..."

I'm trying very hard not to think about what happens after his speeches. 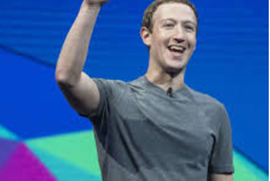 4.  Facebook agreed to pay half a billion dollars to settle a privacy lawsuit in Illinois. According to The New York Times, the suit claimed that Facebook "violated an Illinois...law by harvesting facial data...from the photos of millions of users...without their permission..."

Facebook paid the half billion but denied it had done anything wrong. Apparently they are merely generous people who like to give away large sums of money needlessly.

5. The Wall Street Journal and the Financial Times reported that a lawsuit filed against Facebook claimed its advertising metrics were "inflated and misleading." The suit named COO Sheryl Sandberg as one of the FB executives involved. 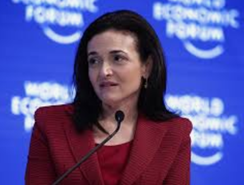 Question for Sheryl: What's worse, blow-drying his pits or kissing his tush?

6.  A study conducted by Gallup demonstrated the degree to which Facebook is out of touch with its so-called "community." These were some of the findings:

7. A writer for Consumer Reports, posing as an organization calling itself the "Self Preservation Society" produced a series of seven outrageous ads about COVID-19. Facebook accepted them all. Here are three of them... 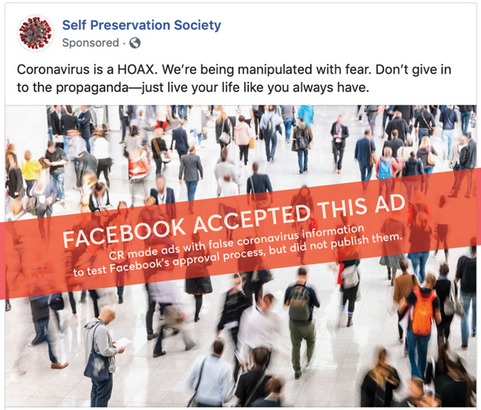 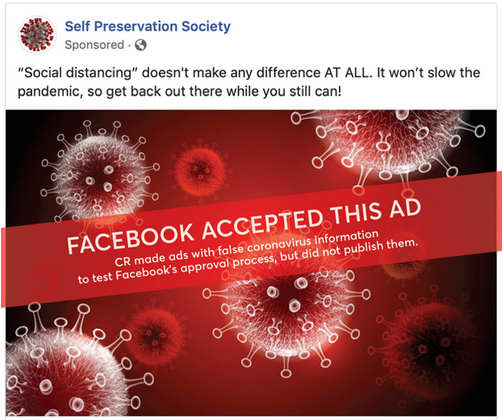 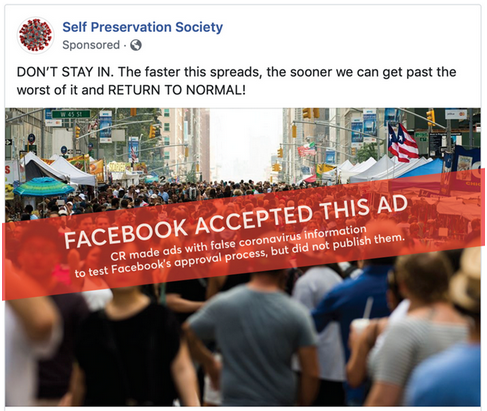 8. The Wall Street Journal reported that in the previous few months Facebook had lost over half its board members. One board member, Ken Chenault, former ceo of American Express, proposed the formation of a group to "study Facebook’s problems and deliver reports to the board directly, circumventing Mr. Zuckerberg."

9. It was revealed that in the previous month Facebook had to remove 50 million pieces of phony content on the subject of COVID-19. This is just one month's worth of garbage on one topic.

10. The Wall Street Journal reported that after the 2016 Presidential election... "Facebook had kicked off an internal effort to understand how its platform shaped user behavior and how the company might address potential harms."

An internal review by a Facebook team ensued. They found that contrary to the horseshit about "connecting the world" Facebook was far more effective at dividing the world. The report found that algorithms they use "to gain user attention & increase time on the platform” was not bringing people together, it was driving people apart.

According to the report, “64% of all extremist group joins are due to our recommendation tools...Our recommendation systems grow the problem.”  This was exactly the assertion of Facebook's harshest critics. What did Zuckerberg and friends do about this? Exactly what you'd expect - nothing on a stick.

According to the Journal... "Many of its own experts appeared to agree... Facebook could mitigate many of the problems. The company chose not to."

11. Reuters reported that the Media Rating Council (MRC), the media watchdog for the ad industry that verifies audience numbers, has had just about enough of Facebook and is threatening to pull their ticket as an accredited media supplier. The MRC had been trying unsuccessfully for years to get Facebook to comply with its standards of verification. The Reuters article said, "The media industry's measurement watchdog has warned Facebook it could be denied accreditation due to deficiencies in how it reports on the effectiveness of advertising on its products."

12. It was disclosed that Facebook was being investigated by the Attorneys General of 47 states. 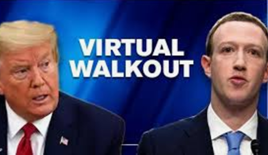 Soon thereafter civil rights executives who met by phone with Zuckerberg and COO Sheryl Sandberg said they were "stunned" by the "incomprehensible explanations" of Facebook's editorial policies.

14. Hundreds of companies, including biggies like Adidas, Clorox, Coca-Cola, Conagra, Denny's, Ford, Starbucks, Unilever signed up for a boycott of Facebook spearheaded by leading civil rights groups such as the NAACP and the Anti-Defamation League. The boycott was labeled "Stop Hate For Profit" and was aimed at derailing Facebook's policies which monetize the spread of misinformation and hate speech.

The audit was reportedly a pet project of COO Sheryl Sandberg and backfired on her. The New York Times said, "The report gave fuel to the company’s detractors, who said the site had allowed hate speech and misinformation to flourish." Sandberg had this to say about the report: It is “the beginning of the journey, not the end.”

Anytime you hear the word "journey" you know you're in for some massive bullshit.

16. At an employees-only virtual town hall meeting to discuss a growing advertiser boycott, Zuckerberg had this to say, "...all these advertisers will be back on the platform soon enough...We’re not gonna change our policies or approach on anything because of a threat to a small percent of our revenue..." 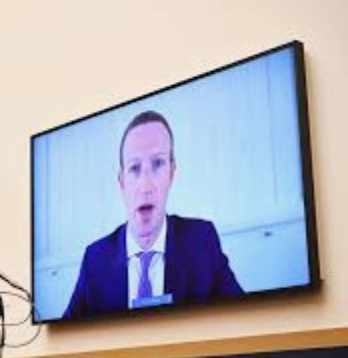 17. Facebook defeated the July advertising boycott by a score of 100 to 0. The boycott fizzled as the gutless, feckless ad industry started crawling back to blow dry Zuckerberg's armpits.

18. The NY Times reported on how the repressive regime in Cambodia used a campaign of Facebook disinformation and lies to ruin a monk fighting for human rights and sending him into exile.

It is a chilling story of how "...In just four days, the reputation of a Buddhist monk who had spent decades fighting for the human rights of Cambodians was destroyed."

19. Years ago, Facebook banned the selling of firearms on its website. As usual, this "ban" turned out to be a  joke. Guns and rifles were readily available for sale.

Then last year lawmakers called on Mark Zuckerberg to get off his ass and take the policing of gun and rifle sales seriously. According to the Wall Street Journal a Facebook spokesquid said, "The company was... “evolving” its automated system and retraining human reviewers hired to catch violating content...”

The Journal reported that firearms dealers are still doing a brisk business on Facebook by the devilishly clever scheme of "disguising" firearms as stickers for firearms.

Apparently, Facebook's thousands of highly-trained moderators and brilliant AI algorithms and "key word" identifiers and "evolved" automated systems couldn't figure out that an ad for a sticker for a gun accompanied by a gun maker's logo might actually be an ad for the gun. You gotta be a real fucking genius to figure that one out.

20. A NY Times columnist penned a piece entitled, "Facebook Has Been a Disaster for the World." "Facebook has been incredibly lucrative for its founder... who ranks among the wealthiest men in the world. But it’s been a disaster for the world itself, a powerful vector for paranoia, propaganda and conspiracy-theorizing... Wherever it goes, chaos and destabilization follow." Hmmm...

Message to Facebook PR hacks: If I ever see the term "express voice" again I will personally track you down and wring your necks.

23. Facebook ran an experiment in which they changed their algorithm to demote posts deemed by them to be "bad for the world."

According to the NYTimes, "In early tests, the new algorithm successfully reduced the visibility of objectionable content. But it also lowered the number of times users opened Facebook..." Did Facebook implement this good-for-the-world change in its algorithm? You're kidding, right?

24. Ad Age revealed that Facebook had cheated advertisers out of millions of dollars. Ohmygod, you see there was this mistake in one of our measurements...It lead to FB overcharging advertisers by millions of dollars for over a year... “Surprise, surprise the error was favorable to Facebook,” said one ad exec to AdAge.

25. Facebook launched an ad campaign in major newspapers. The thrust of the campaign was that FB is the stout and courageous defender of small businesses. Kinda like Dracula courageously defending the blood bank.

The first target of the campaign was Apple. Facebook courageously accused Apple of the grave sin of allowing people to control who can track them. 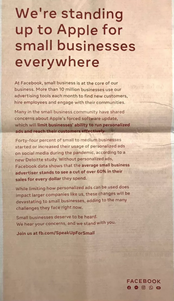 26. Yawn. Years too late, the pathetic FTC filed a lawsuit against Facebook accusing it of being an illegal monopoly. Pardon me for not getting all revved up about this. By the time this lawsuit gets resolved, we'll all be flying around in jet-packs and Jeff Bezos will be sharing a condo with Elon Musk on Neptune.

And so, as the sun sets in the West,  another horrifying year of Facebook disrepute goes into the record book. The result of all this shame and devastation?

Ya gotta laugh to keep from cryin'.