Facebook's strong performance for the fourth quarter of its financial year—44% growth in profit on 33% growth in revenue—was clouded by growing worries over threats from competition, especially with Apple set to give consumers greater control over their personal data. Even as Faceook's user base across its services surged to 3.3 billion, executives continued to be preoccupied by threats from the iPhone maker.

"Apple may say that they’re doing this to help people, but the moves clearly track their competitive interests,” Mark Zuckerberg, Facebook's CEO and co-founder, told analysts on a post results call, referring to changes in iOS.

Sheryl Sandberg, Facebook's COO, too dwelled on the topic, leaning on how small businesses could be hobbled by tighter privacy controls under iOS. "If all personalised ads went away, small businesses would see a 60% cut in website sales," she said. "Now, we don’t think Apple’s contemplating going that far that quickly, but that is the general direction of what would happen. And you can see that that would be very detrimental to their business."

Amid this growing unease inside Facebook about Apple's intentions, the owner of Instagram and WhatsApp posted some mixed numbers for its latest quarter. While headline numbers around revenue and profit looked strong ($28.1 billion in revenue  in Q4 2020 versus $21.1 billion a year ago; profit at $12.7 billion versus $8.8 billion for the same period), the firm's performance on its user base was mixed. 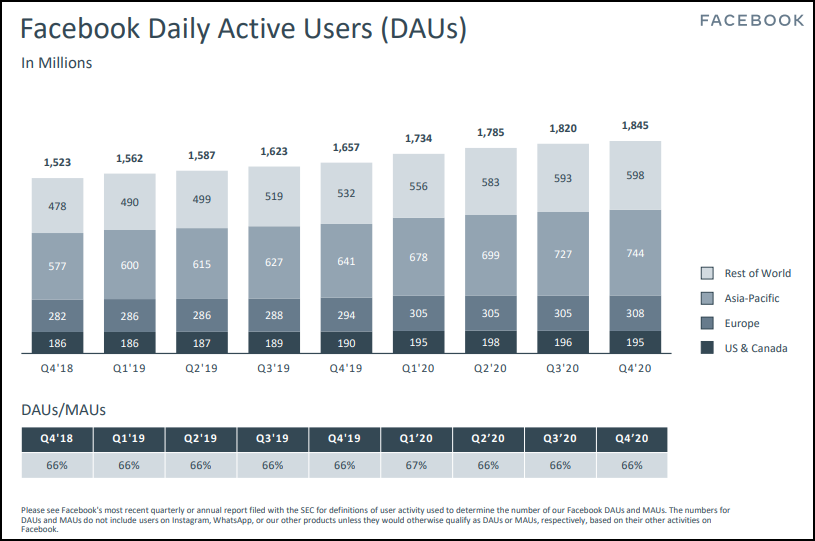 In North America, Facebook’s user base fell to 195 million daily active users from 196 million a quarter ago. This is the second quarter consecutively that the company lost users in the region. Its user base in Europe increased to 308 million daily active users, the first growth in the region after three quarters at 305 million. Asia-Pacific continued to be the biggest contributor to this metric, accounting for 744 million users in Q4, versus 644 million a year ago.

Even though APAC outweighs it in terms of users, North America continued to be a far larger contributor to Facebook's business, bringing in $13.7 billion in revenue for Q4, versus $10.2 billion a year ago. In contrast, APAC contributed $4.7 billion in revenue in this quarter, compared to $3.6 billion the previous year. "On a user geography basis, ad revenue was strongest in Europe, which grew 35% and benefited from currency tailwinds," Facebook CFO Dave Wehner said on the analyst call. "US and Canada grew 31%, and Asia Pacific grew 29%. Rest of world growth improved to 25%, but continues to be significantly impacted by currency headwinds." In terms of its full-year performance, Facebook's revenue rose to nearly $86 billion, compared to $70.7 billion in 2019. Operating profit was $32.6 billion versus nearly $24 billion.

This past quarter also gave industry watchers more insights into how the company would handle its core Facebook platform, but also juice out revenue from Instagram with initiatives such as Reels and by building out its WhatsApp for Business capabilities. On the core Facebook platform, a festering concern has been the action—or inaction—rom the social media giant during events such as the US Capitol violence.

"One way, of course, that we do this is by taking down groups that break our rules against things like violence or hate speech,' Zuckerberg said. "And, in September, we shared that we had removed more than 1 million groups in the last year alone." While the platform has also stopped recommending civic and political groups in the US ahead of the elections, it plans to extend this policy worldwide.

"And to be clear, this is a continuation of work we’ve been doing for a while to turn down the temperature and discourage divisive conversation and communities," he contended. "Now, along these same lines, we’re also currently considering steps that we can take to reduce the amount of political content in newsfeed as well."

With regards to WhatsApp, the messaging platform it owns, Zuckerberg says the messaging service now has 175 million users worldwide, and new features are being built for business users to transact with businesses in the app. "We introduced Carts, which lets people grab catalogs, select multiple products and send the order as a message to a business," he explained. "Many businesses need more than a phone to manage their customer service. So, we’re building tools to let businesses store and manage their WhatsApp chats using our secure hosting infrastructure ... We’re in the process of updating WhatsApp’s privacy policy in terms of service to reflect these optional experiences."


Even as Facebook continues to build out its business, CFO Wehner stated that the company would "continue to face significant uncertainty as we manage through a number of crosscurrents in 2021." Facebook has benefited from two broad economic trends playing out during the pandemic: the ongoing shift to online commerce and second, is the shift in consumer demand towards products and away from services.

"We believe these shifts provided a tailwind to our advertising business in the second half of 2020, given our strength in product verticals sold via online commerce and our lower exposure to service verticals, like travel," he noted. "Looking forward, a moderation or reversal in one or both of these trends could serve as a headwind to our advertising revenue growth." Inevitably, the analysis also looped back to Apple and iOS 14 and the evolving regulatory landscape. "While the timing of the iOS 14 changes remains uncertain, we would expect to see an impact beginning late in the first quarter," he added.

Meta to slow pace of long-term investments amid ...