Many international brands entering China are aware that localisation plays a critical role in their effective communication with Chinese audiences. Companies commonly adopt one of two localisation approaches when approaching the market: localising global marketing practices and creating local-for-local content. Global brand Marriott Bonvoy - Marriott International’s travel programme and marketplace incorporating 30 leading hotel brands worldwide - is one of the success stories in the Chinese market. Here, we take a look at how the brand succeeds in opening the hearts and minds of Chinese audiences through its localisation strategy.

In June 2021, Marriott Bonvoy launched its global “Power of Travel” campaign, calling on the world to embrace the transformative power of travel as a vital pathway to growth, healing, and unity. Given the strong recovery of China’s domestic tourism market, Marriott Bonvoy resolved to localise its global campaign to appeal to Chinese consumers’ tastes.

It sought 10 Chinese celebrities and KOLs from different age groups, professional backgrounds and regions, to share how travel inspires their way of life. These celebrities represented Chinese consumers from a variety of demographic groups, from Gen-Z creatives and established executives to mothers and families - all with a story to tell around how travel has fulfilled different inspiring purposes.

Their stories offer a glimpse into each celebrity’s personal memories, experiences and emotions inspired by their travel. Mani Fok, a Hong Kong celebrity agent, reveals how travel helps her find joy and peace of mind from her overwhelming work schedule; and Christy Chung, a Hong Kong actress, takes a girls’ trip with her two daughters to reconnect and have fun, rather than being the strict mom she normally is at home. Bing Hu, a fashion model, normally stays super fit for his day job but seeks out local specialty food when exploring a new place; while Youhao Zhang, a young actor, discovers new sides of himself and finds more joy out of life in fascinating destinations.

By using notable personalities from diverse backgrounds and giving the global “Power of Travel” campaign a localised twist, Marriott Bonvoy skillfully proved their relevance within the Chinese market, inspiring Chinese audiences to re-discover themselves through travel.

Creating original content for Chinese consumers is also key to success in the market, something that Marriott Bonvoy tapped into with their Chinese New Year campaign, launched exclusively for the local market earlier this year. The purpose of the campaign was to connect with Chinese consumers during the most auspicious time of the year, to send heartfelt wishes, and to stay top of mind while people were celebrating with their families.

The third and final video shows a family sitting down for the long-awaited Chinese New Year’s Eve dinner, over which Yang Zibrings a pot full of “red envelopes” containing her best wishes to everyone. It captures the message “Marriott Bonvoy’s all-inclusive portfolio of 30 hotel brands allows members to discover more experiences in more destinations”.

By tying together scenes that are familiar to all Chinese people when thinking about the Chinese New Year with Marriott Bonvoy’s Chinese name, the campaign stirred viewers’ emotions of nostalgia and created brand awareness. The campaign went one step further and also innovatively tapped into a younger fan base by turning images from the videos into funny WeChat stickers, which were widely shared among users. 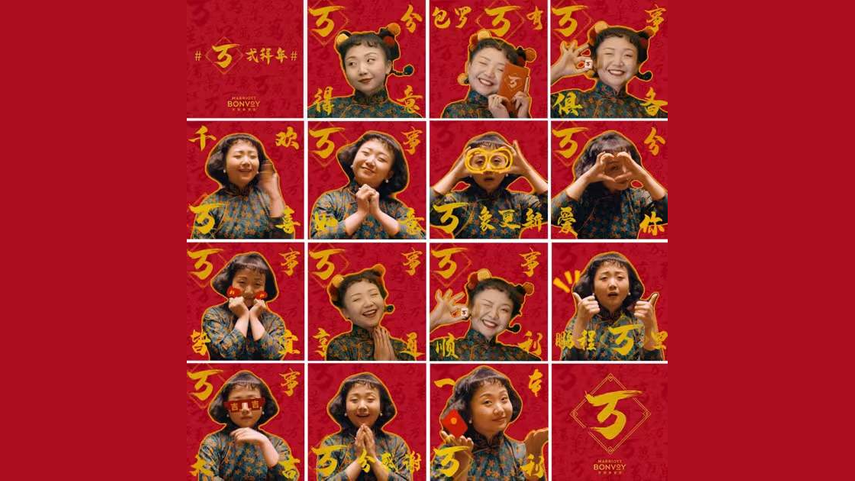 With so many brands vying for the attention of Chinese consumers, Marriott Bonvoy is the perfect example of a company rising above the rest by continuing to emphasize the importance of creating culturally relevant and inspiring content, while still tying back to its core message of keeping consumers updated on the latest trends in travel.  As we enter 2022, we can expect more inspirational stories from Marriot Bonvoy.