Last year, Coca-Cola awarded WPP the title of “global marketing network partner” within a US$4 billion deal that was said to be “unprecedented” in its breadth and depth. Six months since the win and many weeks of working with WPP’s bespoke Coca-Cola unit OpenX, the brand debuts a monumental global rebranding for its lemon-lime flavoured beverage, Sprite. For context, Sprite is The Coca-Cola Group’s second-largest brand with a global retail value of US$20 billion.

Shrenik Dasani, senior global director for Sprite, told Campaign Asia-Pacific: “What makes this really special is that it showcases the power of the company's new network model with WPP. It's the first global output for this new OpenX partnership.”

The insight behind ‘Heat Happens’, which is targeted at the global Gen Z community, is that everyone faces minor heated moments in their day that would typically provoke us to do things we’d later regret. The brand then steps in to encourage people to keep their cool and perhaps “have an ice-cold lemon-lime Sprite”.

Dasani said the brand was fuelled by its ambition to engage Gen Z consumers and get them to drink Sprite weekly. There will also be new focus on the expanding Sprite Zero Sugar line.

“We believe that Gen Z today are living in a world that's more heated than ever before. There are so many things that create heat all around us, even the smallest of incidents that may seem like casual online or offline conversations. And things can escalate pretty quickly,” he said. Example of OOH creative in Asia

From a brand perspective, Sprite has traditionally been associated in many markets as a beverage to quench one’s thirst amid physical heat. While one might picture sweat and the outdoors, Dasani said this new platform is aimed at expanding the brand’s footprint beyond physical heat, so that the product remains top-of-mind in all moments of ‘heat’.

“When I talk about these heated moments throughout the day [faced by] Gen Z consumers, let me clarify that we're not talking about solving the world's problems. We're talking about daily small moments that are within the consumer space,” said Dasani.

Landing on a universal insight and directly executing it globally is not a challenge that many brands take up these days. Dasani said that the brand and agency teams started their research with observing Gen Z consumers while identifying common themes that would unite the target group’s minor inconveniences.

“We started seeing that there were many of these heated moments among Gen Zs, many more than in the past. So that must be frustrating for them,” he said. “A common phenomenon proven in popular youth culture was that there's a need to cool down in such moments across different geographies. They’re probably able to appreciate [this need] whether they’re a young person in Singapore, Japan, China, or the US. This was a good reaffirmation that we might be on to something interesting.”

In a campaign package with a lot of firsts, Sprite also launched its first-ever global visual identity system (VIS), executed by design firm Turner Duckworth. The VIS includes a new logo and packaging design to provide consistency around the world. The brand will not lose its trademark green hue on the packaging, but will now sport a pared-back look to differentiate the original and sugar-free options. The latter is designed with black font and logo design. Reed Collins, chief creative officer at Ogilvy APAC, told Campaign Asia-Pacific that the VIS was the “perfect storm” of having an entirely new brand platform launching at the same time as a fresh look for Sprite.

“As [Sprite] aims to be one globally consistent brand, they needed to have one bold, striking visual identity and it looks freaking awesome. With something of this scale, it will take time to roll out across all markets but I'm sure you'll soon be sitting back sipping on a sexy new can of Sprite,” said Collins.

‘The longest project I’ve worked on’

A suite of creative assets have been revealed for the OOH ‘Heat Happens’ campaign, and an experiential element called ‘Heat Hacks’ will be added as an instant reward for consumers. ‘Heat Hacks’ is a virtual programme that allows consumers to scan a bottle of Sprite and get a quick-fix for their ‘moment of heat’.

“For example, if you’re stuck on the paywall of a streaming platform, maybe the reward could be limited access to streaming content,” said Dasani. “Or if you're trying to get tickets to a concert and there is this a long snaking queue, maybe the reward would be to provide the user a virtual experience. It's dependent on heated moments and what consumers are looking for in that moment.”

The brand has joined forces with rideshare app Didi and weather app Moji to help facilitate rewards within ‘Heat Hacks’. Example of OOH creative in Europe

Ogilvy’s Colliins said that overall, this was one of the longest projects he’s been part of in his career, having produced over 1,000 assets across 200 markets for Sprite.

“We worked across multiple geographies and time zones with a terrific cast of characters who were all critical in bringing this idea to life, during Covid no less. Ibrahim and Selwyn who led the charter are a tour de force and pushed all of us to do the best creative work,” said Collins.

He added that, inevitably, the agency team itself went through many heated moments.

“The truth is we had the classic long days and nights, but really, we built some amazing friendships along the way and we're all proud of the direction we have taken together,” he said. “This is a prime example of the collaboration we have found in OpenX and how we want to continue growing this relationship with The Coca-Cola Company.”

For production partner Sweetshop, the process was also a long and tireless one spanning seven months from start to end. In fact, in Sweetshop’s 20-year history, this campaign was its largest-ever production involving a 21-day shoot across two months. A core team— from Barcelona, Mexico, Shanghai, Turkey, Melbourne and Auckland—travelled into Thailand for the shoot, and the casting process involved 800 people from Bangkok, Kuala Lumpur, Cape Town, Barcelona, Mumbai, Santiago, Sydney, and more. Over 4,000 Covid tests were conducted during this period.

Tim MacLehose, Sprite’s global client lead at OpenX told Campaign Asia-Pacific that despite director Damien Shatford being under an enormous amount of pressure, he stayed cool.

“Damien and Sweetshop created work with us that caters to a great number of markets, cultural nuances, and humour. Damien’s sensibility and the way he manages to get the best performance out of talent is remarkable. We formed a real band of sisters and brothers. It was an amazing environment to work in,” MacLehose added.

Meanwhile, Wilf Sweetland, global CEO at Sweetshop said that creating a global campaign of this scale during a pandemic was an “unprecedented experience” for all involved.

“A team of agency and client personnel from too many countries to mention, a casting process that spanned three continents, a production team from all corners of the globe, all came together to create a highly-crafted and very, very funny campaign,” said Sweetland. “Our enduring friendships were created under pressure and we could not be more proud to have partnered with such a creative client and with an extremely supportive agency network.”

A set of creatives were also developed to be targeted at marketers and trade press such as Campaign, which parodies the behind-the-scenes process of running a campaign (see below). 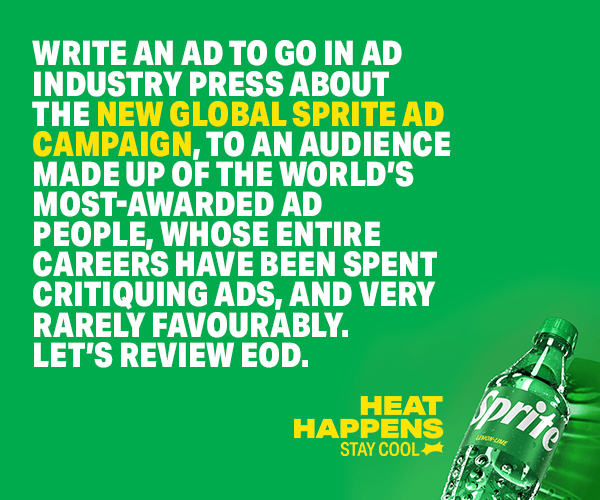 Ogilvy’s Collins said that the thinking behind these parody collaterals is that anyone can understand that in today's world things can escalate quickly.

He added: “Once you have unearthed a gem [of an insight] like this you can go as wild and crazy as you want to be. Sprite has always had an irreverent brand personality so why should we take ourselves too seriously?”