TikTok has unveiled an ambitious plan to capture market share from its social media rivals as it scales its advertising operations globally.

This involves providing the “the most brand safe” advertising environment among social media platforms, aggressively targeting small to medium-sized businesses and evolving how consumers use platforms to shop for products and services. The latter includes through live shopping: a new development in Western markets that some believe is still a work in progress.

Speaking at a press briefing in Cannes, TikTok president of global business solutions Blake Chandlee said that it has “hundreds of thousands” of advertisers, but would like to attract “millions” more to its platform.

To put that into context, TikTok’s major rival, Meta, which owns Facebook and Instagram, reported in 2020 that it has more than 10 million active advertisers, the majority of which are SMEs).

Although TikTok does not publicly disclose its revenue figures, because it is a private company, it is estimated the social media platform could generate $12bn (£10bn) in revenue this year, which would be triple its 2021 figure. This is still a tenth of the size of Meta, which reported $117.9bn in revenue in 2021, and less than half of YouTube’s $28.8bn (about 12% of parent company Alphabet’s revenue pie).

Speaking at a press briefing (pictured below) at the Cannes Lions Festival of Creativity, Chandlee said that TikTok now has more than a billion active daily users – although, on the sidelines of the presentation, he predicted it would one day surpass its rivals – and outlined how the social media platform plans to scale commercially. 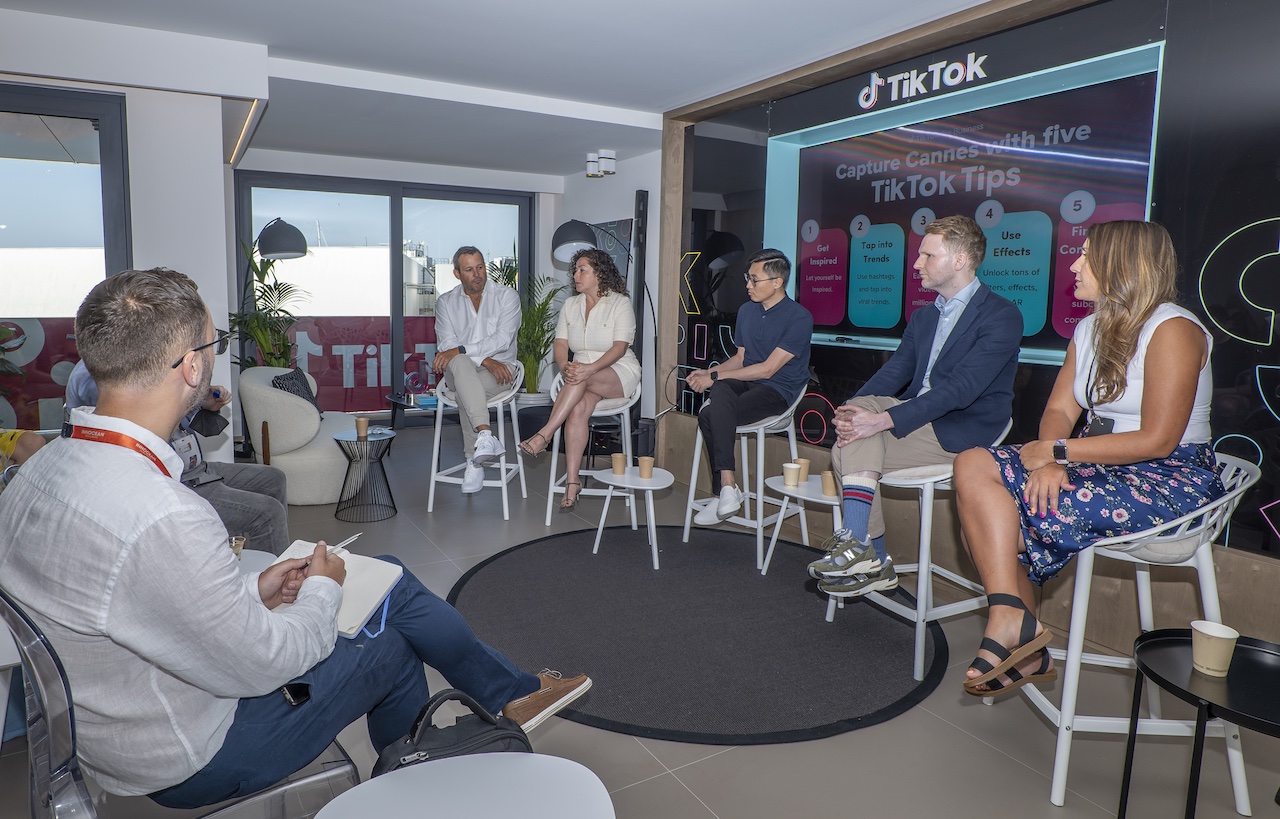 At the core of TikTok's plans is building a platform that is safe for users, creators and advertisers.

The last of those three is important if TikTok wants to play in the big league. Chandlee told journalists that advertising holding groups had urged TikTok to focus on this before it invests substantial chunks of clients' advertising spend on the platform at scale.

He said agency holding group leaders have told him: “We get it, what you’re doing (at TikTok) is interesting, but unless you can ensure that you’re protecting the community and the brands within those communities, it’s impossible [for our clients] to scale (on your platform).

“Reflecting on a conversation a month ago, one of the CEOs of a big holding company said that we had not only caught up on brand safety, but surpassed some of the industry leaders.”

Campaign asked Chandlee how TikTok reconciles a cautious approach to brand safety with trying to attract as much advertising revenue as possible to meet short-term growth targets.

“From the very beginning, we have forfeited revenue for the safety of our community. For example, we made a decision three years ago not to take any political advertising, which is a significant revenue line for other platforms [during parts of an election cycle]. We don’t take alcohol advertising, gambling, guns or dieting pills… these [categories] are not appropriate for our community. (See a full list here).

“Because we are not a publicly traded company and don’t have to disclose financials, we are not under pressure to drive that revenue growth. We have ambitious goals [to grow commercially] but can make decisions that are right for our community versus strictly what is right from a commercial perspective. As a company, we prioritise our user base versus revenue.”

Brand safety has been an issue that has caused headaches for brands on social media platforms, including YouTube, Facebook and Instagram, as ads have been placed – often unwittingly – alongside contentious content due to the nature of how algorithms work. This is an issue that Google, Meta and media agency groups have worked for several years to improve.

As TikTok is relatively new to the market, its leadership team said that it has not been weighed down by legacy systems and built a platform with community and brand safety in mind from a clean slate, drawing on lessons learned from more established rivals.

“We have to consider how to keep content within the entire experience safe. If you spend five minutes on TikTok, you might see a couple of ads but 100 pieces of content, so we have to make sure all of that content is safe for our users. If you sort out the user side, it creates a brand safe environment for brands.”

Chandlee is bullish about TikTok’s plans to grow commercially to the same size as rival platforms.

“When we think about what resonates with our users and our communities, it’s local SMBs. Whether it's a local restaurant or product, there is an emotional connection. We are empowering SMBs to come on platform, and we’ve built very similar interfaces to other platforms that they’re used to,” Chandlee said.

“We are now having to scale and educate the SMB community; we’ve got hundreds of thousands (of SMB advertisers) but we want millions.” 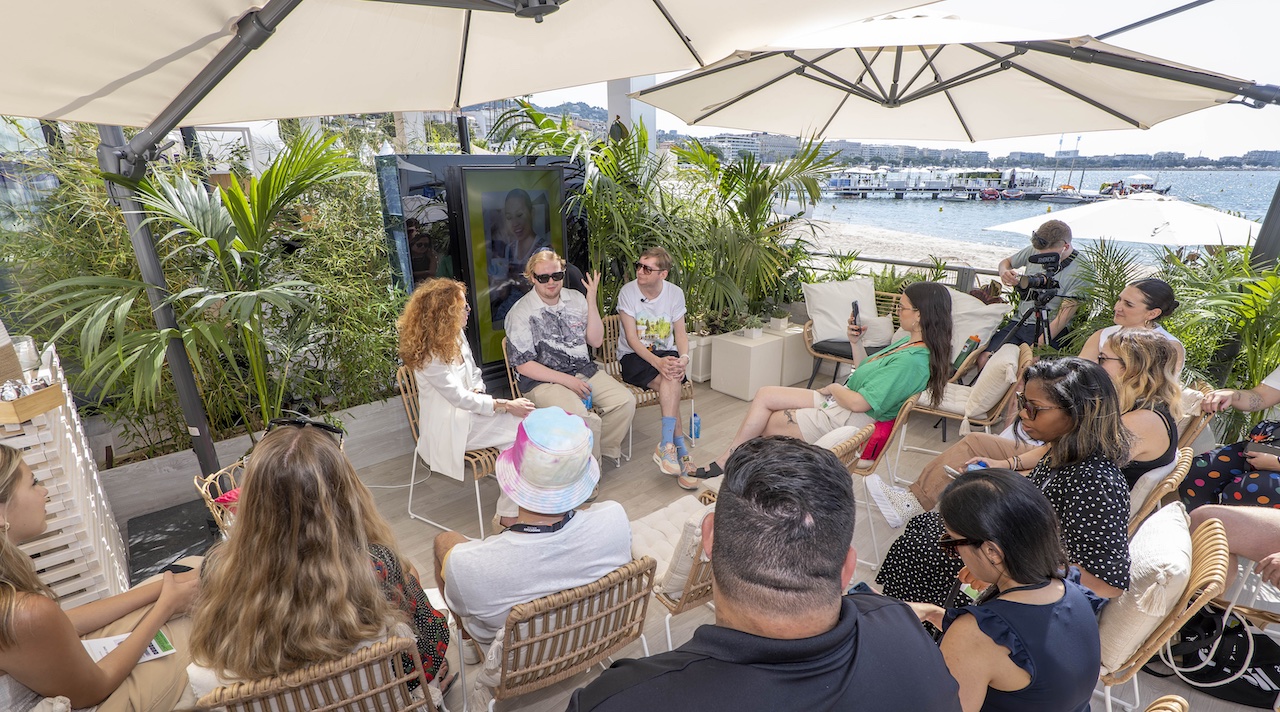 ‘Shopping with your best friend’ – just not yet in Europe

A core focus for TikTok to help SMEs get the most out of its platform is its ecommerce functionality, in particular TikTok Shop.

Social media platforms that have their headquarters in the US have been looking to introduce ecommerce offerings in ways that are not intrusive to the user experience, although it is questionable whether any have quite cracked it.

However, TikTok’s Chinese parent company, ByteDance, has been doing this for years through its sister app Douyin. According to the Financial Times, Douyin reported sales tripling year on year to more than 10 billion products, but Chinese consumers have been using social media apps to shop for several years.

TikTok Shop aims to roll out this experience and technology around the world. It launched TikTok Shop in the UK last year, which allows brands and TikTok creators to broadcast live shopping experiences through the video app. It launched in Indonesia and parts of South East Asia this year.

TikTok said there are no immediate plans to roll it out further at this stage, despite media reports suggesting it had earmarked for expansion in Europe, but was shelved due to internal problems –which TikTok disputes.

Ray Cao, TikTok’s managing director, global head of monetisation product strategy and operation, said there are three shopping experiences for advertisers on TikTok – live shopping, video shopping solutions and live shopping events – and that the ambition is to fully integrate these features with advertising.

“This is about crushing the funnel,” Cao said, later explaining that users can use TikTok to discover, consider and buy products and services in one place. “We strongly believe that advertising and also these organic kinds of behaviours on tackle have to be combined together.”

TikTok’s global head of business marketing, Sofia Hernandez, said live shopping was an evolution of traditional marketing, and required brands to “step outside their very safe brand guideline box and start to put their hands in the TikTok community”.

“We've been partnering with some early adopters from a large shopping perspective, American Eagle being one of the ones who has been a great partner,” she said. “They've done a few live shopping events successfully and it's exciting because they start to see a significantly different level of engagement.

“I always describe it as if it's not [like TV shopping channel] QVC. It's easy to think of it that way. It's more like shopping with your best friend.” 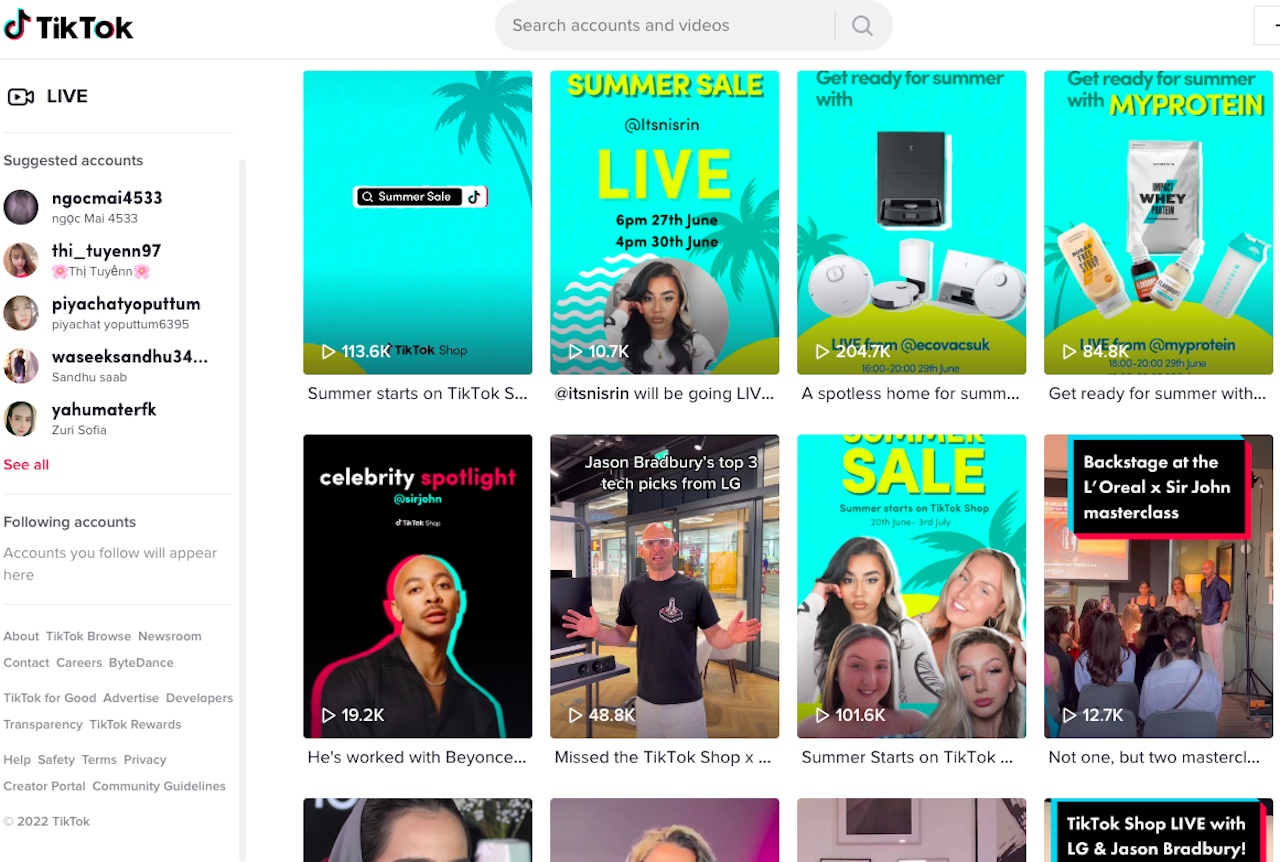 Campaign understands TikTok considers several factors that determine which markets TikTok Shop (pictured above) expands into. These include macroeconomic considerations, the local merchant landscape and a talent pool to deliver the service.

The question remains whether such functionality will resonate with UK or European audiences and brands that are used to reaching consumers through traditional shopping channels or established ecommerce platforms, such as Amazon’s Marketplace.

Jessica Whitney, managing partner of paid social at Dentsu UK, told Campaign that there is an advertiser appetite for TikTok Shop, on the basis of conversations she has had with clients since it launched last year.

“From a shopping perspective, they've really accelerated the development and delivery of TikTok Shop and it integrates the product’s feeds, with a focus on a seamless shopping experience in-app,” she said. “In the Asia-Pacific market and China, they are five year ahead in terms of digital sales growth and volumes. We are gearing up clients for TikTok shop and its ecommerce offering.”

Whitney said Tiktok has exploded onto the scene and its growth in users in such a short space of time is unprecedented, creating a sense of FOMO among clients that they should “jump on the wave everyone is riding”.

“What will be interesting is to see how creatively this evolves. The power of brands to create moments and capitalise on the platform to reach users,” she added.

MediaCom’s head of influencer marketing, Emily Trenouth, offers a more cautious take on whether TikTok Shop is gaining traction in the UK.

“Given how much time we all spend on our phones, live shopping is a logical format to further collapse the consumer path to purchase and make it easier for us all to purchase from the brands and creators we love. However, this style of instantaneous shopping is very new and it’ll take a while for consumers to adapt to shop in this way,” she said.

What is undeniable, Trenouth observes, is that TikTok has boomed during the pandemic and “completely changed the way that people find sources of entertainment, education and inspiration”.

“We’ve found that TikTok has moved from a 'nice to have' to a 'must have' within our clients media plans, and the uplifts in budget allocation are only going to accelerate,” she added.

“The versatility of content on the platform is like nothing I’ve seen before, so it’s a no-brainer that it’s a central tool for brands to become more culturally relevant, particularly with Gen Z audiences, and creators are at the core of that.”

This will be music (or perhaps a sea shanty) to the ears of Chandlee and his leadership team. Attracting SMEs will ultimately determine whether TikTok scales commercially to the levels of its major rivals. However, winning over social media planners and convincing advertisers it’s a brand safe place to play are important battles to win, even if changing consumer behaviour to embrace live shopping is a longer-term play.

Getting in tune with generation TikTok