M&A activity has surged in the first half of the year, fuelled by private equity (PE) funding and increased political and economic confidence prompted by the success of the global vaccination numbers. In its latest report, Ciesco, a specialist M&A advisory firm operating in the tech, digital, media and marketing sectors, said there were 832 transactions announced in this period, a 46% increase year-on-year from 2020.

In tech, digital, media and marketing in H1, S4 Capital was the most active M&A buyer, disclosing seven acquisitions—most of them completed in Q1. S4 is in the process of raising a term loan of more than $350 million to fund its expansion, and raised its profits forecast twice over the last month due to the recovery of the global economy. Accenture announced six acquisitions, the latest being the Malaysia-based agency Entropia. This represents a major step in the firm’s expansion into South-East Asia.

“Digital and business transformation looks set to accelerate at super-speed in 2021 and 2022 with the digital and data-led companies that showed resilience throughout Covid 2020 leading the way," Chris Sahota, CEO of Ciesco said. “The global economic predictions look optimistic for the sector and the M&A drive has picked up pace from where we stood before the pandemic struck at the end of the first quarter in 2020." 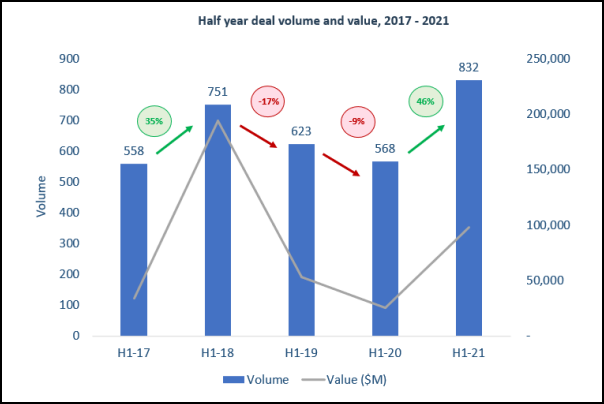 The US has already reached pre-pandemic GDP levels, and growth is projected to reach 6.8% this year. The UK is expected to reach pre-pandemic GDP in mid-2022. Emerging market and developing economies as a group are forecast to expand 6% this year. The Asia-Pacific region recovered from the pandemic recession at the end of last year. This provides a strong backdrop to M&A activity. Ad spend generally follows GDP trends and is projected to grow double digits this year driven by nearly all digital formats, Ciesco noted.

Digital media was the target sector for which buyers had the greatest appetite, with 172  deals—up 35% on H1 2020— made. This sector includes digital publications, podcast operators, streaming and social media platforms, and gaming and esports developers and providers, all of which are growing rapidly in popularity. There were 117 martech deals, up 60% year-on-year. Deal volume among PE firms rose 81%—they struck 372 deals in H1 2021—and a rise in deal value of 14.2% to $19.2 billion. Nearly half (44 percent) of all transactions in H1 2021 involved a PE buyer. PE activity was split between the acquisition of new platform companies and bolt-on acquisitions to existing portfolio businesses. In May, CVC and CDPQ acquired a majority stake in BlueFocus’ international group of agencies including We Are Social, fuseproject and Vision 7 International.