Global new-business billings reached a record high in November, which included the largest account win of the year, according to data from Campaign’s Advertising Intelligence tool, in partnership with R3.

With billings reaching $8.5 billion, November has generated the most adspend in 2021, overtaking September’s $7.3 billion by 15%.

The Coca-Cola $4 billion pitch – the largest to date – is no doubt a contributing factor.

WPP was named the brand’s new global marketing network partner and picked up the majority share (90.5%) of the account, with billings of $3.6 billion.

A bespoke unit, called OpenX, will be managing the creative, media, data and marketing technology across Coca-Cola’s entire portfolio of brands – with MediaCom (an agency part of the WPP network) part of the team handling the media side.

The remaining proportion of the account (9.5%), worth $380m, has been allocated to Dentsu to handle the media side in Japan and Korea. 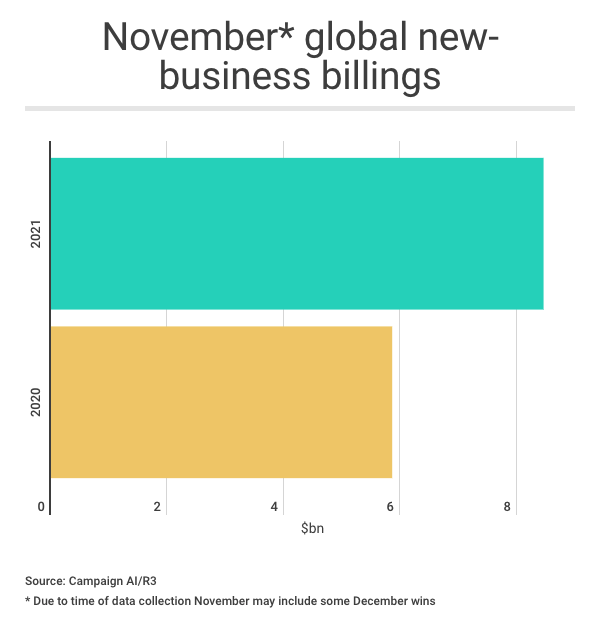 By contrast, in November 2020 creative reviews took the lead, with $3.7 billion, accounting for almost two-thirds (63%) of the total billings for the month. Media billings totalled $2.2 billion (37%). Alongside Coca-Cola, Google consolidated its media account in November 2021 with WPP’s Essence. The agency already held the majority of its global media account (80%) and picked up an additional two accounts with total billings now worth $1 billion.

However, PHD won the Google Australia account for $4 million.

On the creative side, WPP scored a spot on the roster of a pharmaceuticals and healthcare client in the US for $60m, and independent agency VaynerMedia won Durex’s global account for $50 million.

By holding company, WPP contributed to six of the top 10 wins in November, bringing in the most new business for the month by far, and helping it to secure first place on the table with total adspend of $5.8 billion.

Omnicom followed with billings of $841 million. Dentsu was in third with $380 million.

October's top holding company Publicis Groupe came in at the bottom, with billings of only $228.7 million.