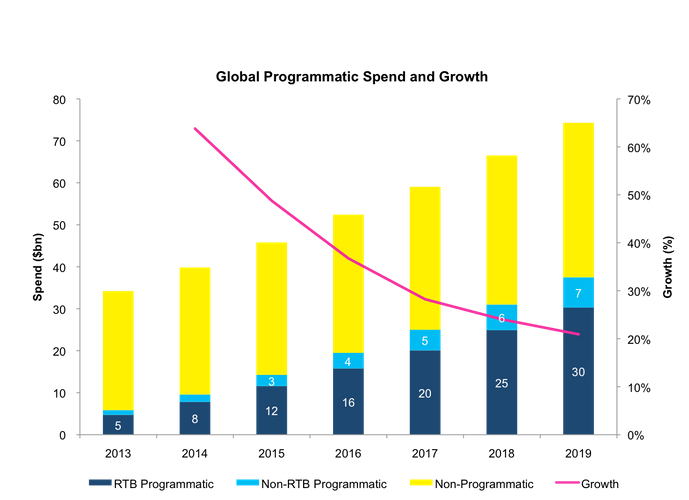 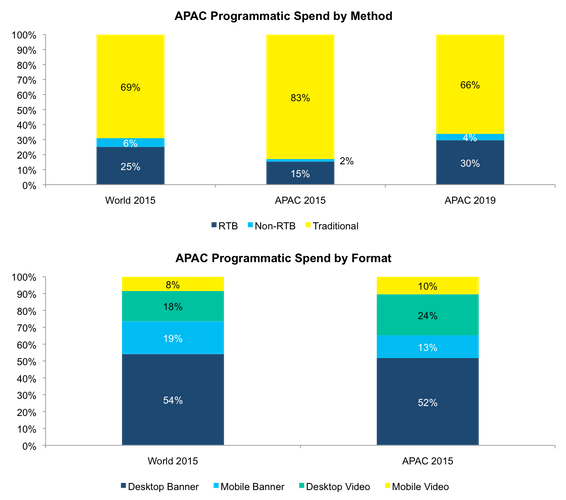 Luke Stillman, associate director of forecasting at the strategic global unit of IPG Mediabrands told Campaign Asia-Pacific via email that the first hurdle is that many local ad tech players populate the Asian landscape.

“This is in some ways good because of the uniqueness of some of the Asia Pacific markets that local companies are likely better equipped to handle,” he said. “But it does also mean that they’re all reinventing the wheel somewhat rather than adopting some of the solutions developed elsewhere.”

In addition, Stillman said the data environment in Asia-Pacific is still limited relative to the size of spend.

The largest markets in programmatic dollars: the US, the UK, Japan, China and Germany, dominate total global spend (89 percent of the total programmatic spend is represented by the largest 10 markets).

The US, with US$7.7 billion worth of programmatic transactions alone represents 54 percent of global programmatic spend.

Asia Pacific is characterized by large global programmatic markets such as China and Japan, some of the most developed such as Australia, and some of the smallest and least developed like the Philippines, Vietnam, Thailand, and Indonesia.

“The relationship-based elements of the marketplace for display and video also makes it more difficult for an automated process to take hold,” Stillman added, noting that growth in many markets is also hindered by entrenched incumbent transaction methods and limited targeting data.

He added that outside of Australia, Japan and China, there are some very high growth but small markets. Indonesia, Vietnam, Korea, Hong Kong and Thailand are the five fastest growing programmatic markets through 2019.

“In addition, although spend is much lower, some of the APAC markets like Malaysia are as developed as markets in Southern and Eastern Europe such as Spain, Hungary and the Czech Republic,” he said.

The markets in APAC with the highest programmatic video penetration as a share of total video spend are Australia, Malaysia, Japan and India.

The markets with the highest expected video growth in 2015 are Singapore, Hong Kong, Thailand and Indonesia, although some are very high growth rates due to small amounts of spend in 2014.

This will be driven by markets like Australia, Hong Kong, Singapore, Japan and the US, where mobile will represent a large share of the total pie by the end of the forecast period.

“As the technology available for tracking and targeting users on mobile devices improves, strong mobile markets will see higher than average growth of programmatic spend as a result,” he added. “Publishers also have to be willing to make available mobile inventory beyond only the inventory that goes unsold.” Australia’s programmatic market is highly evolved, with penetration expected to reach 64 percent of the total spend by 2019; one of the highest shares globally and trailing only the UK.

Australia is a market in which many initiatives have been media owner driven. The Australian digital landscape is highly evolved, with mobile and digital representing significant shares of total digital spend. Because of the robust current spend values, growth is only expected to be a mild 23 percent next year following 2015’s 36 percent growth. Japan’s total programmatic spend is approaching US$1 billion. This is significant despite a penetration of just over 20 percent, well below the global average. Japan has the third largest digital advertising market in the world, and therefore even small penetration values translate to significant spend.

Japanese programmatic ecosystem participants have a conservative approach to programmatic. Despite the rise of private exchanges in 2014, there was no corresponding jump in programmatic growth and penetration.

One area in which Japan’s market does not lag the rest of the globe is in mobile programmatic penetration. Mobile banner and video already represent 40 percent of total spend, and that figure will increase to over 2/3 of total programmatic spend by 2019. China will remain the fourth largest programmatic market globally by 2019, trailing only the US, UK and Japan. Some of the largest internet players such as Baidu, Alibaba and Tencent have leveraged their data collections from search, e-commerce and social and created closed ecosystems similar to what has been done by Google and Facebook in the West.

They operate their own exchanges, and therefore it is difficult for any other competition in the market because of a lack of external data.

However, concerns over quality of inventory in exchanges cause brands to be reluctant to execute an open exchange platform. As a result, private exchanges are increasing in importance providing a comfortable starting point for many to start spending programmatically.

India has limited potential for programmatic development; given its extremely low ad spend. That being said, Indian programmatic penetration is still 20 percent ahead of Mexico and China due to penetration of platforms like You Tube True View.