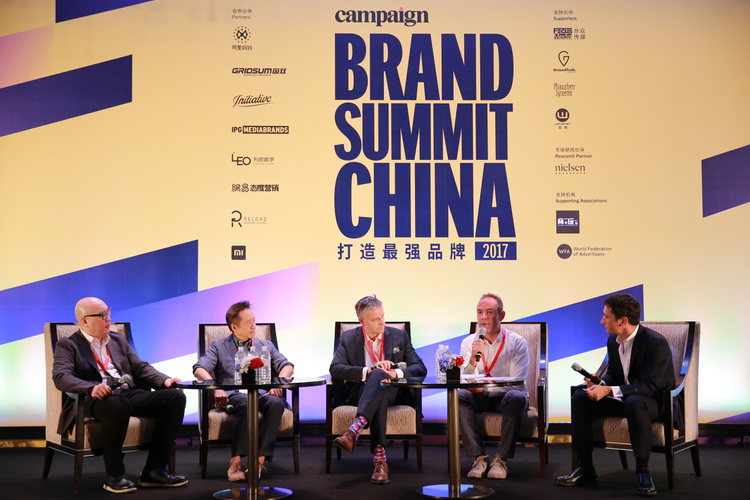 All brands are after Chinese consumers and their rising incomes, but they are also a fickle lot. For example, only 54 brands which made the list of China's top 100 brands list in 2007 (part of Campaign's Asia's Top 1000 Brands report), remained on the top 100 list in 2017.

A lively panel debate about whether Chinese consumers are more disloyal than others kicked off the the Brands Summit China, held in Shanghai yesterday.

During the panel, moderated Robert Sawatzky, Campaign Asia-Pacific’s head of content, Tom Wan, CEO of IPG Mediabrands China, argued that Chinese consumers are not more disloyal but they do like to explore new options, which makes things mor difficult for brands.

Richard Cotton, content and creative excellence director at Coca-Cola China, suggested that the practice by brands to use celebrities could instead diminish the loyalty of consumers. “We are investing into [the celebrities’] equity and not our equity," he said. "All our equity [could be] gone like that. Are we being responsible marketers in doing that?”

Then again, it is not fair to just blame fickle consumers. “As an industry we are pursuing short-term tactics like celebrity endorsement that borrow equity rather than build our own. Added to that is the increasing prevalence of short-term digital engagement metrics – likes, comments, shares – at the expense of brand-equity building metrics. Until we build real equity into our brands, it is no wonder that consumers are promiscuous,” he argued.

However, he also questioned whether building loyalty should be a primary objective. “We all have finite marketing budgets. And for most of us in China, we are at the very beginning of the journey with much smaller penetration and brand usage compared to mature markets. So does it make sense to be spending very meager cash in building loyalty among a small base, when the real business opportunity it to drive trial among a much larger audience?”

Industry veteran Tomaz Mok, co-founder of Match, said there is no direct translation for “branding” in Chinese. “It is all about going back to basics," he said. "In advertising strategy, it is very rare to have a so-called branding campaign." He believed that emotional connection to a certain brand evokes loyalty, and creatives play a role to produce content that makes the audience feel a “wow” factor about the brand.

Given that loyalty programmes rank fairly low among Chinese consumers, IPG Mediabrands’ Wan said money-can’t-buy experiences, such as backstage access to stars such, which Alibaba has offered to its top consumers, could make such schemes more attractive.

Indeed, experience was the buzzword bantered about at the summit from discussions on the online-to-offline new retail model to CRM.

Brenda Wu, digital and CRM director of Yioulai, a premium retail outlet chain, said offline risks being obsolote if brands only bank on flash sales. “Consumers can already get that from ecommerce," she said. "But online shopping has yet to satisfy the five senses. This is one aspect that bricks-and-mortar stores can still win."

She also pointed out that certain features offered by offline retail outlets, such as being pet-friendly, could be helpful in widening the consumer base, by bringing pet-store customers to a fashion retail setup, for example.

Meanwhile, Henry Shen, head of strategy at McCann Health in Shanghai, said brands should highlight the experiences of consumers, rather than what their products can do. Going back to the loyalty issue, Shen said consumers are more likely to stick to brands that care about them. "Innovation doesn't mean anything if it doesn't create value. And to create value, you need to understand what consumers need and want," Shen said.

"A washing machine campaign targeting senior consumers can resonate better if it mentions that consumers would not hurt their backs while doing their laundry due to good design; rather than how effective the machine is in removing stains," said Shen. "For seniors, they don't want to change their habits for the sake of technology and innovation". But tech does play a role in helping them maintain their lifestyles in their own ways, he added.

When it comes to how brands are reaching out to younger generations, the discussion is becoming more granular.

While most discussions in China have focused on the post-90s, discussion, dividing generations by decade, Linna Zhao, head of insights at MEC China confirmed there’s a growing preoccupation with Gen Z  post-millenials now—those born after ’95. Data sets are being gathered on much smaller age groupings of five years or less.

What defines the group, Zhao said, is being born into families whose parents were among the first in China to challenge cultural norms on a wider scale.

Gen Z is the first to “own their own discourse right since they were born,” Zhao said. They naturally seek more independence and individuality and therefore respond well to brands that allow for individualized experiences.

Yet the more granular the data becomes, the harder it is to typecast. Allen Chen, head of insight products at Miaozhen Systems, said too many brands rely on their perceptions of categories, not what the data tells them.

Their data, for instance, told them that beauty products hold greater relevance for men than popularly perceived.

When it comes to post-millenials, “many like eSports and livestreaming but it doesn’t prevent them from liking activities that are quite traditional” said Chen, who has identified a “mezzanine” consumer category who sit somewhere between old and new, between modern and traditional tastes.

That led a discussion of eSports fans (not all of whom are young) and what brands need to do to break into a base of people who have their own special language and culture.

Philip So, head of business development for Riot Games, noted that fans might not only dress up like gaming characters, but they know their character’s personalities and even the origin and function of their weapons. So authenticity is very important.

Gamers and Gen Z people like to poke fun and revel in “complaint culture”, So said, so any brands that wade in to engage “need to have a thick skin.”