Downy has registered the biggest increase in advertising awareness in Indonesia for the month of October 2022, of all the brands we track in the market. Data from YouGov BrandIndex, which tracks consumer perceptions toward brands on a daily basis worldwide, shows that Ad Awareness of the Proctor and Gamble-owned brand saw an uplift of 6.1 percentage points over the four-week period.

The fabric softener was in the news last month, as one of the household goods that various supermarket chains in Indonesia – including Superindo, Alfamart and Indomaret – were running promotions for. 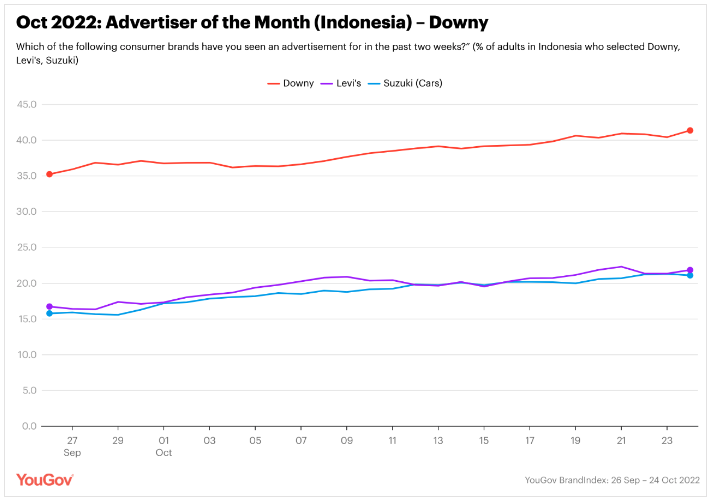 According to data from YouGov BrandIndex, Downy’s Ad Awareness score rose from a low of 35.3% on 26 September to a high of 41.4% by 24 October. Ad Awareness is a BrandIndex metric that measures the percentage of people who have seen adverts from a particular brand in the previous two weeks.

Methodology: YouGov BrandIndex collects data on thousands of brands every day. A brand’s Ad Awareness score is based on the question: “Which of the following consumer brands have you seen an advertisement for in the past two weeks?” (% Yes). Data from surveys of adults aged 18 years and above residing in Indonesia from 26 September to 24 October 2022. Ad Awareness scores are based on a four-week moving average. The change in scores for each brand is calculated by taking the difference between the highest and lowest scoring days within the period. Learn more about BrandIndex.