In case you weren’t aware, BlackBerry still exists. But it's not your father or mother’s BlackBerry anymore. The company hasn't made phones in several years, and now bills itself as cyber-security provider. It offers a range of software products that find use in enterprise IT networks and mobile phones, as well as in diverse ‘embedded systems’ and computing ‘endpoints’—terms of electronics-industry jargon that encompass everything from robots in manufacturing plants to smart traffic signals to multimillion-dollar laparoscopic surgery systems to automobiles.

While the Canadian company is still struggling financially (it posted a US$1.1 billion operating loss on revenue of $893 million for the fiscal year ended February 28), it’s currently seen by some as a good buy because its stock price is low and there is vast potential in its new space.

Today, BlackBerry’s US-based CMO, Mark Wilson, who joined the company in 2014 and became CMO in late 2017, is pushing out a global campaign pressing a new mantra of ‘Intelligent security everywhere’. Wilson sat down (via Zoom) to talk with Campaign Asia-Pacific about the company’s big pivot, how he reaches the buyers he needs, and the fine art of getting messaging right in a sector governed by fear.

The following Q&A has been edited for clarity and brevity.

Please tell us about the experience of taking a well-known brand and completely changing what it’s known for.

As you can imagine, it’s a massive transformation. When I joined, Alicia Keys was our creative director, and The Black Eyed Peas was our corporate band. It was a very different time. You had Obama and the Kardashians showing off the phones.

So it’s been a big pivot, going from hardware to software and from a consumer play into an enterprise play. It was really a double pivot, and it's been an incredible transformation for the company.

The first thing was truly looking at our brand. What were the attributes of the company and of the brand that were the most valuable? BlackBerry was known for providing a highly secure device, a highly secure experience, and also a highly productive experience. So it's been about taking that idea and figuring out, what can we now apply that attribute to? 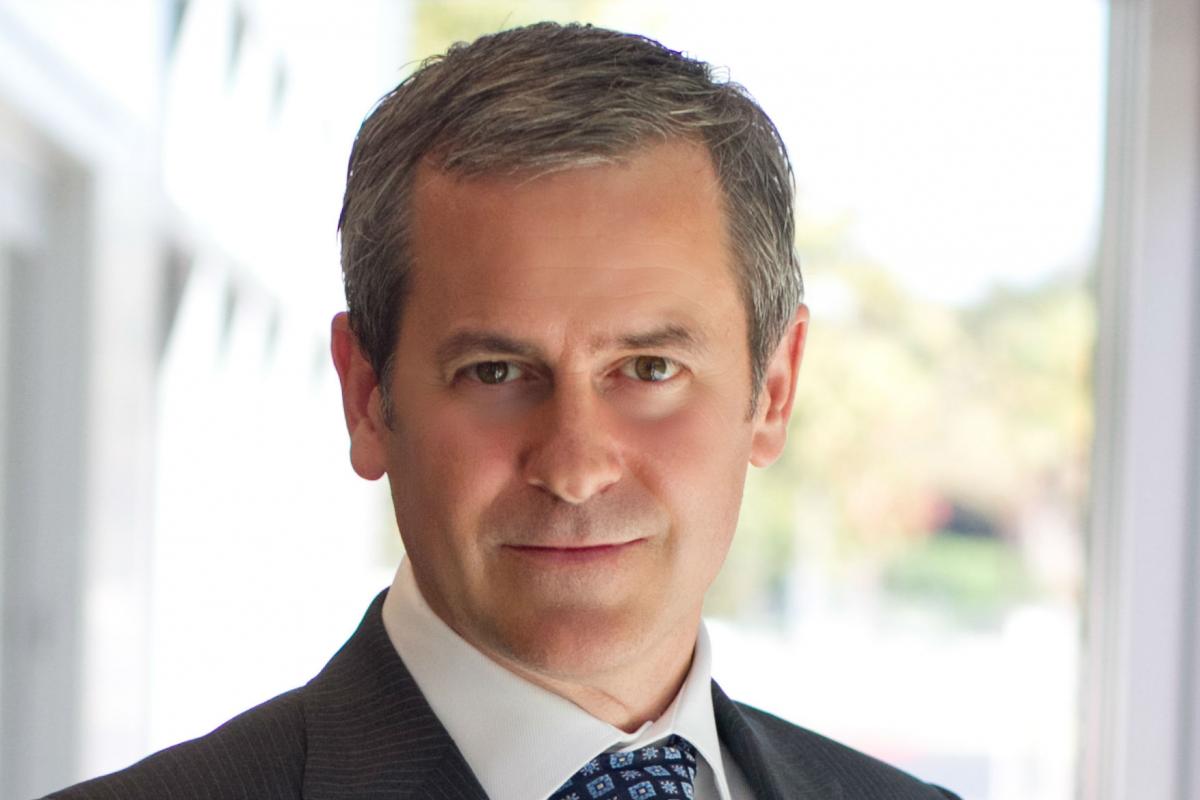 
The market for smartphones is pretty saturated. Everybody on the planet has one, so it's not exactly a growth market. We looked around and we said, where else can we point this whole idea of security? And we realized, all of these smart devices were becoming more intelligent. Whether that meant cars or whether it meant cities or traffic signals or vending machines, everything was just becoming more intelligent, in the enterprise as well as in society overall.

Our software is now in over 500 million endpoints, including over 175 million cars. We're now in 23 of the top 25 electric vehicle makers. And WM Motor in China just announced that they're shipping their electric vehicles, standardized on our platform.

Did the company ever consider a completely different name?

Certainly people had questions about the name. That definitely came up. There was an affinity for RIM [Research in Motion, the original corporate name] as a name to go back to. But I think at the end of the day, we saw that there was so much equity in BlackBerry. We found that everybody had a positive affinity with their BlackBerry. A lot of people would say ‘They had to pry it out of my hand’, or ‘I was the last person in my organisation to use it’.

All of that equity and the affinity for what that experience was—we didn't want to lose that. And we felt that if we changed the name to Strawberry or something, we would lose that equity in BlackBerry.

As a marketer, or a brand, a name is a vessel to be filled. There was a lot of goodness to it, it was just a question of how to refill it by pointing it into this new market.

How did you go about creating the new campaign?

What was cool about this campaign is that we started with the narrative. We wrote the story of BlackBerry, and we actually did that in-house. Who better to know the narrative of BlackBerry than ourselves? So we wrote the narrative, and then we worked with a couple different agencies to figure out how to bring that to life. We particularly worked closely with an agency called First Person in San Francisco. From that we started to build out a visual system of how to bring that whole concept of ‘Intelligent security everywhere’ to life. And then after working with First Person, we then brought a lot of the resources back in house, in terms of how to build out the website presence and how to build out the ad units and the social units. What media do you rely on the most?

Print and digital have been the biggest pieces, but now we have also moved into podcasts and radio. And eventually we see looking to go into more broadcast media. So it’s publications like The Wall Street Journal, The New York Times, Fortune, and Wired magazine.

We go after people that make purchasing decisions around security. That'll typically be a CIO or CISO [chief information security officer]. Those tend to be the big buying groups. And then within their organisation there's lots of additional people that will buy security around, for example, mobile computing, or any type of endpoint computing.

Our view is that at the end of the day, we're influencing that buying group. But even then, security has become a board-level issue, something that the board needs to know about it. So we target business publications because, one, we believe that the CIO and CISO are absolutely in those publications. But we also feel like the CFO or the CEO or the board is also in that overall group that is aware of the solutions that the companies are implementing.

We also go through social networks. We find LinkedIn to be very efficient in terms of being able to highly target the roles that we care the most about. We'll also put that more broadly into other social channels. That can include things like Reddit. And it even includes social networks like Facebook, where you can do some highly precise targeting. And then Twitter and things like that. Those are effective channels. We kind of look at it between traditional media as well as social media, as the two channels.

We have also launched a new program to get our employees to be bigger brand ambassadors. We find that across all of our employees, whether they’re an account manager or a sales engineer or a developer or someone who works in HR, all of those people have their own networks. It's a cool thing, because you get to activate probably your strongest communication channel, which is your employees.

What about earned media? What kind of content do you produce and how do you distribute it?

We do a lot of different types of content and thought leadership. The content that we have found to be the most effective has been original research. One example is a report called Bahamut, which identified a hack-for-hire company. And we also did a report called The Decade of the Rats, which is about how people were going into data centers and compromising them years before anyone had recognised it. We've done a report around mobile malware, about how threat actors are specifically going after mobile devices.

We're able to do this research and identify who's being attacked, and then we can reach out to them and let them know they're being attacked, as well as let the industry know that it's being targeted by these threat actors. We find that works really well.

What is your biggest challenge right now as a marketer?

The challenge that we face is, we play in a market where the core message has been fear. It's fear of a threat and fear of adversaries attacking you, which are very real. So the challenge is, in a market where everybody has a similar message of fear, how can you begin to turn that, and have a more positive message. In an industry where everybody knows they can play a fear message, can you run a different type of message to be more positive, in terms of what does security mean, and what's the benefit of security? Not just the fear of being breached.

You want to be realistic. You certainly aren't ignorant of the fears. So even the threat research we do, you are constantly uncovering new attacks that are going on, or you're sharing how you're responding to existing attacks that are in the market. So we do a lot of that, but it's not just the fear marketing or the fear message.

It's important to think about how to talk about the productivity gains of, for example, working from home. When work-from-home happened, companies had gotten pretty good about managing the firewalls for their offices. But as soon as the office became, instead of one office, 3000 home offices, and then all of the people that work in those home offices, how in the world do you secure all that? It became a much more interesting, complex issue.

How does APAC play into your ambitions?

We have marketing resources in Australia, Singapore, Hong Kong and Japan. So we're in a number of different markets in Asia, both in terms of selling our enterprise solutions as well in terms of being in the embedded-systems market. The announcement with WM Motor is a good example of how we're looking to expand our presence, but we have a big presence in terms of the auto industry in Japan and Korea as well.

Is the marketing approach any different in APAC?

It's actually not. For cyber security, we find these to be such global topics. The hackers really don't have a regional flare, so they tend to use the same tactics on a global basis. So we find that the conversation around security doesn’t vary much by region. It varies more by industry. For example, in healthcare, they get so many ransomware attacks. But even there, we find that now a lot of other industries are getting that kind of similar ransomware attack as well.

It is really about global phenomena. In the auto industry, with autonomous vehicles, the issues are how you're providing safety-certified operating systems, and how you're building out these cars to deliver a unique digital experience. All of this is happening on a worldwide basis, so every manufacturer is having similar conversations. And the same thing is true for whether it’s governments or banks or healthcare providers or education institutions. You can be in basically any industry, and you're starting to perceive that people are attacking you and that you need cyber security around that.