Over the past decade or more, the headlines have not been great for Japan’s big consumer electronics makers. Competition from Korea, China and Taiwan and a shift towards mobile-based apps for entertainment has seen more of Japan’s electronics giants diversify away from consumer-based goods into B2B products and services. For many years business announcements revolved around cutbacks and layoffs to consumer product divisions or category exits as margins squeezed thinner.

A look at the historical brand rankings of names like Sony, Sharp. Canon and Toshiba (see graphic below) in our annual consumer survey bears this out. 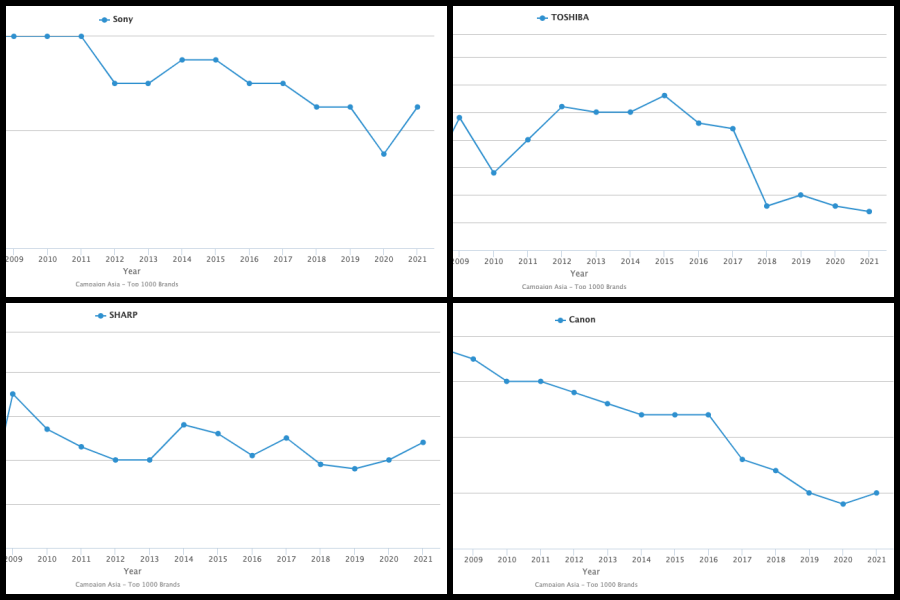 But this year, many of these legacy brands experienced a resurgence, especially in Japan under the rise of sugomori shohi or ‘nesting consumption’ in the words of Kota Murakami, associate vice president of client services at Essence Japan.

On our list of the top 100 brands among Japanese consumers, once again, Panasonic repeated as Japan’s top brand overall. But notable gains in the top 10 were made by Sony (+2), Sharp (+3) and Hitachi (+2) while Toshiba rose five spots to enter the top 20. Even Canon, which has seen its rnking steadily eroding for years, along with other camera and printer makers, managed to hold steady in 18th spot. 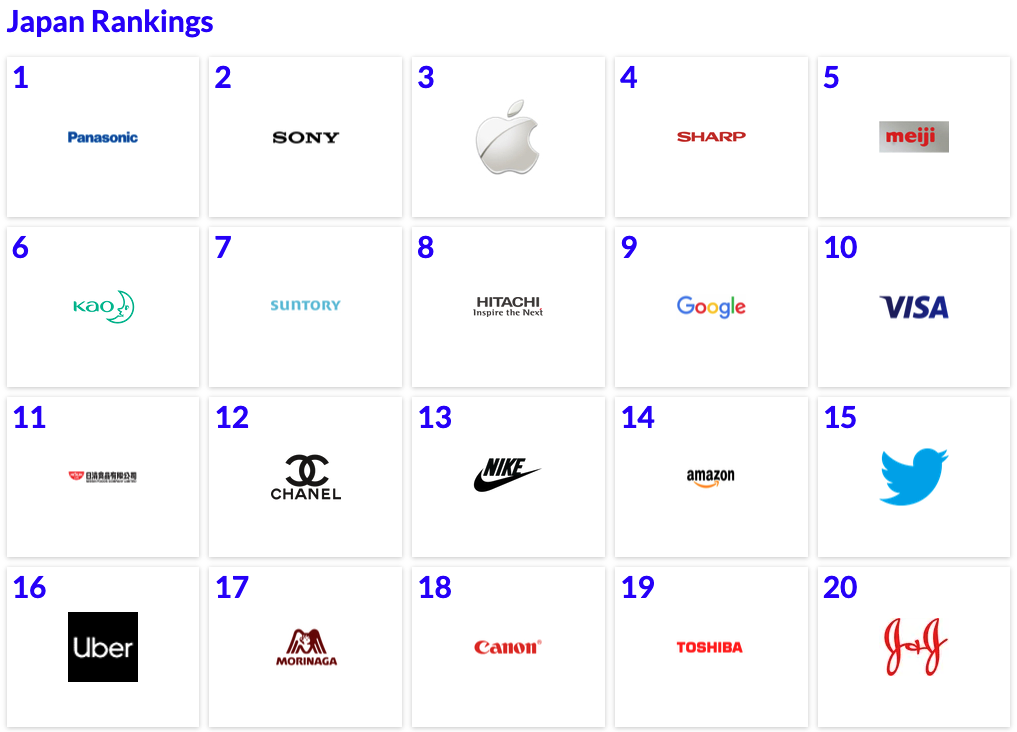 “As people were spending more time at home, there was a huge rise in the sales of kitchen and other home appliance and consumer electronics, and Panasonic is definitely the top brand in many of these categories,” explains Reiko Ogata, chief branding director at Dentsu. “They kind of rediscovered their strong consumer-centric function.”

Ogata says all of these home electronics makers have been constantly innovating, but people have not always paid attention to whether their refrigerator needed upgrading or what the new 4KTVs look like. “But once you’re staying at home for longer and doing more cooking and cleaning, people started to think about upgrading or purchasing new things, digging in to all the new functions of products coming out and became quite excited by them," Ogata says.

“Electrical Home Appliance brands, such as Panasonic, Sharp, Toshiba and Hitachi, grew their business and affinity during the pandemic,” agrees Yukiko Ochiai, president and CEO of Grey Japan. Their degree of success, she adds, often related to bringing in small but useful innovations whilst keeping a close eye on consumer insights. “Even the very basic appliances such as refrigerators and washing machines continued to innovate, which created a desire for consumers to upgrade,” she says.

A good example of this, says Ochiai, was the anti-bacterial technology of Sharp (Plasmacluster) and Panasonic (Nanoe-X) built into the majority of their products. “Consumers placed a high importance on health and safety and brands reciprocated with new innovations to fulfil this need.” 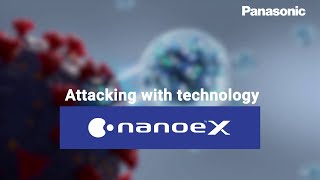 Ogata points out that Sharp has been steadily innovating in kitchens and is now known for its high-quality kitchen appliances, integrating steamers and pressure cooking for healthier meal preparation.

Murakami at Essence suggests that ‘choice fatigue’ among online shoppers inundated with both known and lesser-known brands may also be playing a role. Uncertain with the wider array of online options, some consumers may simply gravitate to familiar, long-trusted brands.

Panasonic, he says, has long established trust and mutual respect from Japanese consumers since the days of founder Konosuke Matsushita, known as the ‘god of management’, and continues to differentiate itself through a deep understanding of consumer needs. Its concept of giving consumers ‘Lifestyle Updates’ since its 100th anniversary celebrations in 2018 bears this out, Murakami says.

Sony, meanwhile, hits both notes as a trusted brand that’s still innovating. While its TV business has struggled in the past, it has now become a market leader in the high-resolution 4K category.

But mostly Sony has benefitted greatly from its position as a leader in bringing high-quality entertainment into homes when cinemas and socialising outside of homes was no longer an option. The launch of Sony’s new Playstation 5 console, for instance, was very well timed for a populace in dire need of entertaining themselves.

But beyond simply being in the right category, Ochiai points out that “the strength of Sony is in its ability to lead entertainment trends and extend or leverage them within its various platforms so consumers have easy and multiple ways of access to it.”  A good example of this was the successful animation Demon Slayer, which was extended to a movie, games and music through Sony's multiple channels (see Playstation trailer below).

Like all other markets, Japan witnessed a digital transformation of daily life under the pandemic which greatly benefitted the big providers of digital-based communications and services like deliveries.

Google jumped five spots this year to enter Japan’s top 10 brands as the ninth overall brand. Amazon rose even more, up seven places to land at number 14. Other online social media platforms saw sizeable jumps too, like Twitter (+4) to 15th, Line (+4) to 21st, and Yahoo (+6) to 22nd.

Murakami points out that the technology giants far outpaced other sectors in terms of growth and investments in Japan, and therefore have been able to accelerate an already advanced pace of digitisation to evolve and future-proof their own ecosystems.

Uber actually surged the most, up 11 spots this year to reach 16th overall. This, commentators point out, was not because of its ridesharing business, which took a hit during the pandemic, but because of Uber Eats, which capitalised on the greater need for variety in dining at home through heavy investments in promoting and advertising.

If there is a third trend to emerge from this year’s brand rankings, it might the erosion of Japanese food and beverage brands. Last year we noted how Japanese food, beverage and restaurant brands were losing ground to global counterparts who outspent them on marketing and were capitalising on changing consumer tastes.

This year Japan’s highest-ranked F&B brands, Meiji and Suntory both slipped two spots each within the top 10.  And last year’s third F&B brand in the top 10, Morinaga, the candy, dessert and biscuit company once known for its wacky offbeat advertising, plunged 11 spots from sixth position to 17th this year despite advances in adding probiotic bacteria strains to its foods.

Some of this can be chalked up to displacement by rising electronics and digital brands, however, and it should be noted that not all F&B brands suffered the same fate. Instant noodle maker Nissin, popular with the work-from-home crowd, bucked the trend, moving up a notch to 11th overall.

A bigger jump however, was registered for Asahi, a brand on the rise Asia’s beer category overall, which jumped eight ranks in Japan to reach 23rd in the market.

Ogata points out that during the month of April when our survey took place, popularity peaked for a newly launched Asahi product, its ‘Nama Jokki’ can, which allows you to pull off the entire top of the can, allowing a frothy top to rise up and deliver a draft beer taste to those stuck at home. The product generated a lot of press, and Asahi was forced to suspend sales as demand exceeded supply.

No matter the category, the Japanese brands that innovated and catered to those at home, saw frothy brand equity returns with consumers.