Back in February, CLSA analyst Jonathan Mardjuki published widely reported research detailing how the pandemic had spurred huge growth and dynamic competition among food-delivery providers in greater Jakarta, despite the dominance of two main players.

“Online food delivery is benefiting,” Mardjuki wrote, noting that 70% of the 450 consumers he surveyed were now ordering food online more frequently. “Overall, we think healthy competition between the two giants will have a positive impact on the Indonesian market.”

This year’s 2021 Asia’s Top 1000 Brands research led by Campaign Asia-Pacific and NielsenIQ added a new home delivery category to the survey. In the April survey involving 400 consumers across Indonesia, not only did GrabFood and GoFood debut among Indonesia’s top 100 brands overall, but they placed 21st and 26th respectively, outperforming their larger parent brands Grab and GoJek at 29th and 42nd, signifying a high degree of dominance in Indonesia’s home-delivery category. 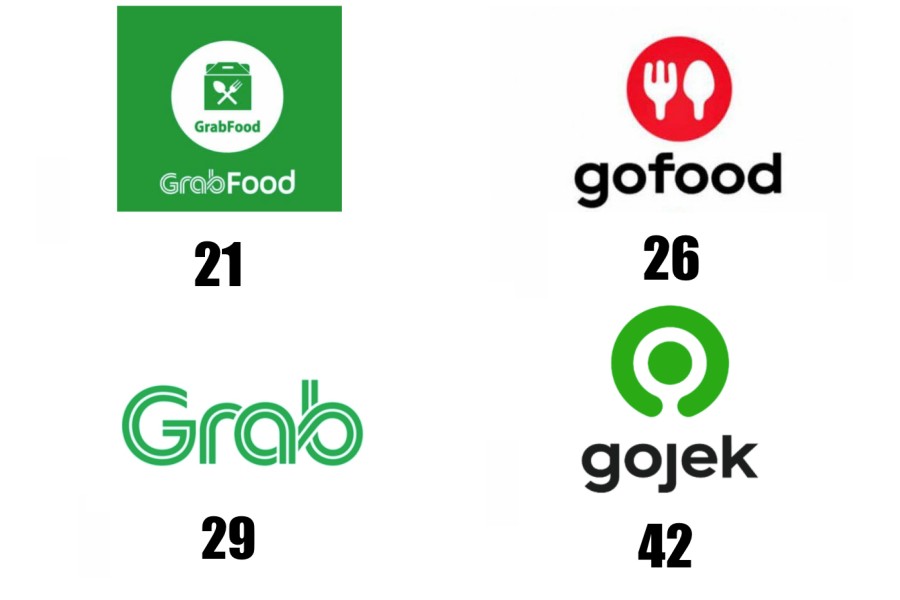 
In the February study, Murdjuki determined the GoFood app continued to hold an edge over Grab Food based on greater loyalty among customers, who cited familiarity with the application, dependence on the GoPay e-wallet and user-friendliness as its top three benefits.

However, it noted GrabFood was making strong inroads on the back of heavy promotional and discount offers that resonated with 60% of its users.

"We find Gojek customers to be more loyal, while Grab relies on commerciality,” Mardjuki wrote. “We also consider Grab to be more aggressive in securing customers.”

Marcellyna Citra, business development lead at BrandWorks Jakarta, agrees with this assessment, noting how GoFood’s loyalty through convenience with shared payment and ride services has been targeted by countless discounts and promotions from Grab Foods for a long time now.

GrabFood’s aggressive strategy may finally be paying off. In our April survey, Indonesians gave it a slight edge in brand recognition over GoFood.

“I think it's still a promo-heavy market,” says Bayu Asmara, an independent Jakarta-based brand consultant who leads DKK Consulting. “People still tend to switch to the one that provides the most discounts.”

This tendency has opened the door for other new entrants like ShopeeFood and Traveloka Eats that are applying similarly heavy discounts and promotions. ShopeeFood in particular is being noticed as a worthy competitor, with its 40 million monthly active users and solid delivery logistics network already in place.

“They are really trying with seemingly the best deals,” Asmara says of the new entrants. Yet he is sceptical whether they can catch the two giants, since consumers tend to have a limit to how many similar service apps they’re prepared to install on their phones.

With heavy competition, consumers can afford to be more fickle and demanding of food delivered hot to their door. Yet the CLSA research noted customers are becoming less likely now to switch providers based on delivery speed or driver cancellation rates than they were in the early days. Instead, app convenience is becoming more important, which can just as easily draw ire from discerning users.

“GoFood and GoJek as a whole have seen a bit of negative feedback for their increasingly sluggish app and confusing UI or UX,” opines Asmara. “I have definitely seen more and more people mention this as their main reason to prefer using Grab. This might end up giving Grab the edge if GoJek is not careful.”

Who can add value?

Baba Hazuria, head of strategy at Iris Indonesia, believes GoFood has done a great job of leveraging new occasions and helping customers learn new habits and rituals, while both are guilty of peddling obvious promos and discounts.

“The interesting point here is what they will do to stay on the list,” Hazuria says. “How will they keep our loyalty and ensure we still order instead of going out all the time? We see some brands do this with their recommendation algorithm getting better, new loyalty programs being introduced and cross-pollination of apps where lifestyle meets food.”

As Citra points out, both companies have launched cloud-kitchen businesses as additional business models, giving more access to small F&B businesses to expand their ventures in a much more affordable way, while offering more choice. Keeping these food networks on side, while cross-promoting brands across their super-app ecosystems, will be important.

Since the GoJek-Tokopedia merger, the combined company has only gotten started with cross-pollination. Still in their infancy, early collaborations tend to resort to yet more discount incentives, like one such campaign this summer whereby Tokopedia users were offered up to 75% off on some purchases and free shipping when using GoFood.

For now, neither company needs to worry much about over-reliance on discounting. Prami Rachmiadi, growth partner at Mindshare Indonesia, believes leveraging parent company investments and database integrations, like the GoTo merger and media conglomerate Emtek’s investment in Grab (along with e-wallet Dana and ecommerce site Bukalapak) have been key to elevating the online and offline presence of both services.

Indeed, GoFood and GrabFood now both find themselves with deeper pockets and resources to keep up the intense competition as part of a much larger battle between superapps and ecommerce allies.

Let’s just hope that the rivalry continues to benefit the consumer.