Technology giant Amazon reported a blockbuster fourth quarter and full year set of numbers, with revenue topping $100 billion for the first time—it rose 43.6%, from $87.4 billion to $125.5 billion. Operating profit for the period increased 77.52% YOY. Amazon saw growth across its businesses, ranging from its Amazon Prime media unit to its AWS Cloud business.

However, the annoucement on earnings was overshadowed by founder Jeff Bezos' annoucement that he will transition to executive chairman and would be replaced as CEO by web services chief Andy Jassy in the third quarter of the year. “When you look at our financial results, what you’re actually seeing are the long-run cumulative results of invention," Bezos said in a statement. "Right now I see Amazon at its most inventive ever, making it an optimal time for this transition."

Despite its red-hot growth, Amazon forecast that revenue for the first quarter of the new fiscal is pegged at $100 to $106 billion, an increase of between 33% and 40% from a year ago. Operating income in the same period is projected at $3 billion to $6.5 billion, assuming the roughly $2 billion of costs related to Covid-19. 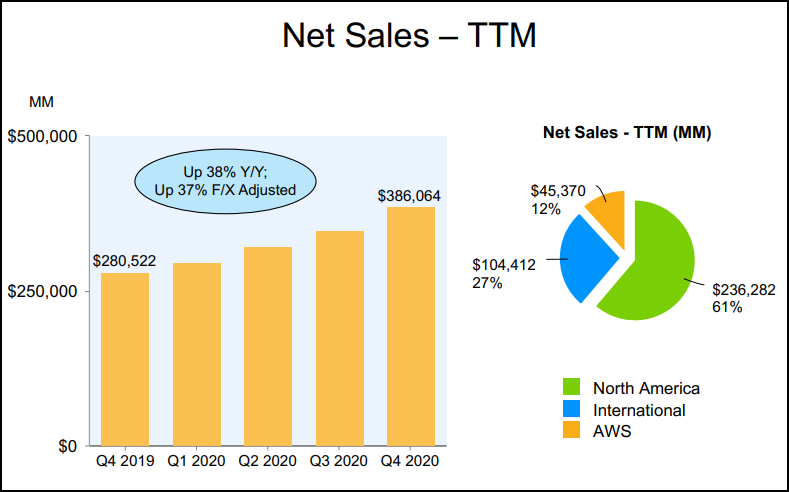 Amazon stated that it delivered over a billion parcels to shoppers around the world, as pandemic-struck consumers flocked online to platforms to wrap up their year-end shopping. Elsewhere, the cloud business too profited from the pandemic, with revenues growing 28% in the period under review to $12.7 billion.

Amazon doesn't reveal exact details of its advertising revenues, which it clubs under its 'other' category. According to the company this segment brought in nearly $8 billion in revenue in Q4, a 64% year-on year increase.

In addition to this, Amazon's various media businesses continued to grow in 2020. In terms of its Amazon Prime program, CFO Brian Olsavsky told analysts that it had over 150 million paid members globally now, and "we mentioned that we have more people joined Prime in Q4 than any other quarter before." In addition, In the US, Prime Video’s coverage of the San Francisco 49ers vs. Arizona Cardinals game on December 26 drew an estimated 11.2 million total viewers, in the UK, the number of customers tuning into live Premier League football grew for the second season, and in India, Prime Video announced its first foray into live sports, with the acquisition of India territory rights for New Zealand Cricket through the 2025-2026 season.

Unlike other tech companies, Amazon doesn't provide a granular geographic breakdown of its business. According to its investor presentation, net sales in North America rose from $53.67 billion in Q4 of 2019 to $75.34 billion, as operating income increased from $1.9 billion to $2.94 billion. In the international segment, revenue was up from $23.81 billion to $37.46 and the company turned a $613 million loss into a $363 million profit for the same period.