On August 8, the Olympic Games ended with China taking home an impressive 38 gold medals—only one less than the US.

But athletes weren’t the only ones who scored big this summer. Chinese sportswear giant Anta also got its share of the spotlight when it unveiled its slick red and white uniforms as the official sponsor of Team China. Combining traditional Chinese designs and advanced sportswear technology, the “Champion Dragon Clothes” accompanied 777 athletes to Tokyo, with 88 of them finding their way to the podium.

Aside from this major publicity boost, Anta has also benefited from the recent swell of national pride. With Chinese consumers fervently backing homegrown brands and boycotting foreign competitors — particularly after the Xinjiang cotton crisis — the owner of Fila and Japanese ski-line Descente saw its share prices surge 157 percent over the past year, putting its market value at $64 billion.

Now, Anta is on track to overtake adidas (whose shares rose only 39 percent to a value of $74 billion) to become the second most valuable sports company in the world after Nike. Below, Jing Daily looks at Anta’s playbook for staying on top and whether global brands can still dominate China’s sportswear scene.

Part of Anta’s plan to gain a better foothold in the market is to, quite literally, create stronger footwear. In the next five years, the company will invest over $616 million (4 billion RMB), aimed at improving its global R&D system and increasing its output of high-end products. In fact, over its 16-year partnership with the Chinese Olympic Committee, Anta has already spent $460 million and filed 1,400 patents, setting itself apart through innovation to challenge more established players.

Some of the fruits of its research were on display in Tokyo this year. Weightlifter Lü Xiaojun, for one, was sporting golden Anta sneakers that were stress-resistant to the weight of 14 adults when he smashed three Olympic records. His competition suit was also specially designed to provide waist support and prevent muscle damage. 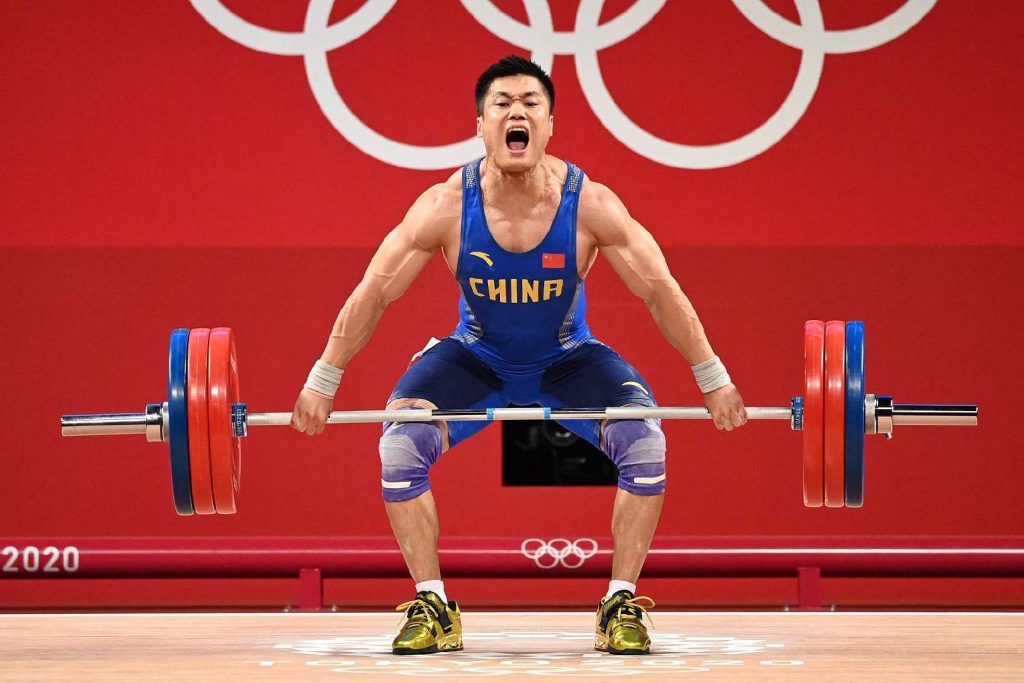 The Anta sneakers worn by Chinese gold medalist Lü Xiaojun use a special fiber that is 2.5 times stronger than regular materials and can handle the weight of over one ton. Photo: Anta’s Weibo


Yet, Anta’s isn’t just looking to serve elite athletes with its technology; it wants to enhance the quality of its mass products, too. And this is a timely move as more people in China now play a wider variety of sports at a competitive level, says Allison Malmsten, a market analyst at Daxue Consulting. “Ultimately, the success of sports equipment comes down to performance,” she explained. Therefore, by providing specialized equipment to the mainstream, Anta helps reduce China’s reliance on foreign brands and reshapes the “Made in China” image to mean highly functioning.

Turning a moment into momentum

Naturally, there is no better place to showcase high-quality products than on an Olympic stage. Although the broadcast of this year’s opening ceremony hit an all-time low for NBC, averaging 16.7 million viewers, China and Japan’s viewership soared to 153 million and 70 million, respectively. This massive turnout catapulted even a yellow duck hair clip worn by one of China’s medalists into a viral sensation, with searches for the accessory ballooning to 420 percent on Taobao — proving the Olympics’ selling power.

However, with many other events vying for Chinese consumer attention, the publicity from this 17-day stint is not necessarily sustainable. As Yishu Wang, director at Chinese marketing company Half A World, states, long-term growth post-Olympics ultimately depends on whether brands plan to keep their momentum going.

Luckily, Anta has done just that. As part of its “Two Olympics” (Tokyo 2020 and Beijing 2022) strategy, the sportswear leader will launch Anta Champion Stores in Tier-1 and Tier-2 cities to promote China’s national team stories. On top of that, it will also introduce a collection of high-end sportswear and lifestyle products incorporating technology used by these pro athletes. Not only does this plan allow Anta to continue its Olympics-themed marketing after the closing ceremony, but it also solidifies its brand storytelling as the clothing choice of champions.

Teaming up with sports influencers

Another way Anta is targeting sports lovers, particularly Gen Zers, is by recruiting several “high-quality” sports stars, including dancer Wang Yibo, freestyle skier Gu Ailing, and NBA player Klay Thompson, to promote the brand. But while these big names come with loyal and ready-to-spend fan bases, working with KOLs is not without risk. The recent slew of celebrity scandals, which saw luxury brands bid au revoir to idols Kris Wu and Zhang Zhehan, shows just how tricky it can be to nail down the right voice. 
“The main advantage of picking athletes over idols is that athletes are less likely to be under the spotlight of paparazzi and less likely to be involved in scandals,” Wang said, emphasizing the need for brands to perform due diligence. “The major negative is that they don’t bring as many eyeballs and sales as idols do. With everything politicized globally, international brands also need to be aware of their non-Chinese brand ambassadors’ public comments about China.”

Unlike the tech, gaming, and private tutoring sectors, which recently saw their shares fall due to increasing regulations, sports have benefited from government support. By 2025, the country will expand its sports sector to a value of $774 billion, a 70-percent increase from 2019, while constructing more parks, public stadiums, and fitness centers.

That means there is great potential for sports clothing brands to target China. Although nationalism has propped up local players and shaken sales for rivals adidas and Nike, Malmsten argues that global names have always had a leg-up on quality and prestige. “While nationalism will always be a selling point among certain consumers, others are looking for quality and are willing to pay the price for foreign brands.”

Granted, as Chinese designers bolster their R&D funding, it is not enough for international brands to rely on their reputations alone. As Malmsten put it, “the rising quality of Chinese products will give foreign brands a run for their money.” Anta clearly has a good track record when it comes to winning races. So competitors better strap up.