China’s share of global brand value has increased from 3% to 15% over the last 10 years, and eight Chinese brands now rank in the top 25:

Korea is the only APAC country other than China and Japan with representatives in the top 100: Samsung at 4, Hyundai at 79 and LG at 88.

Google’s value grew a relatively modest 10% to $120.9 billion. The Android owner had overtaken its smartphone rival Apple in last year’s ranking, after the iPhone maker’s value plummeted 27%. Facebook climbed from ninth to fifth, with its value up 45% to $89.7 billion. The membership of the top 10 remained the same, with AT&T, Microsoft, Verizon, and Walmart making up the rest.

David Haigh, chief executive of Brand Finance, commented: "Jeff Bezos once said that ‘brands are more important online than they are in the physical world’. He has proved himself right by choosing the name Amazon, known as the largest, most powerful river in the world, as 23 years later the Amazon brand carries all before it as an unstoppable force.

"The strength and value of the Amazon brand gives it stakeholder permission to extend relentlessly into new sectors and geographies. All evidence suggests that the amazing Amazon brand is going to continue growing indefinitely and exponentially."

The ranking uses factors including marketing investment, familiarity, loyalty, staff satisfaction and corporate reputation to produce a financial measure of how much value a brand contributes to its owner. 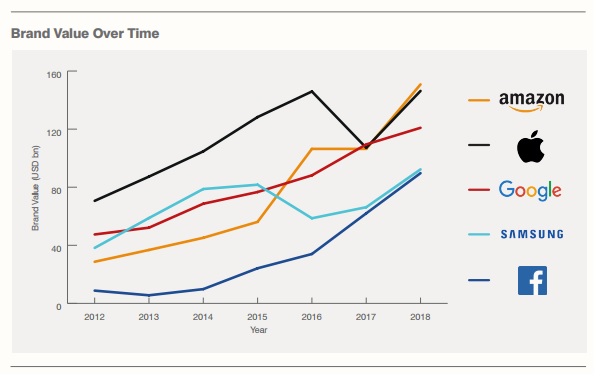 Breaking down US antitrust bills against Big Tech