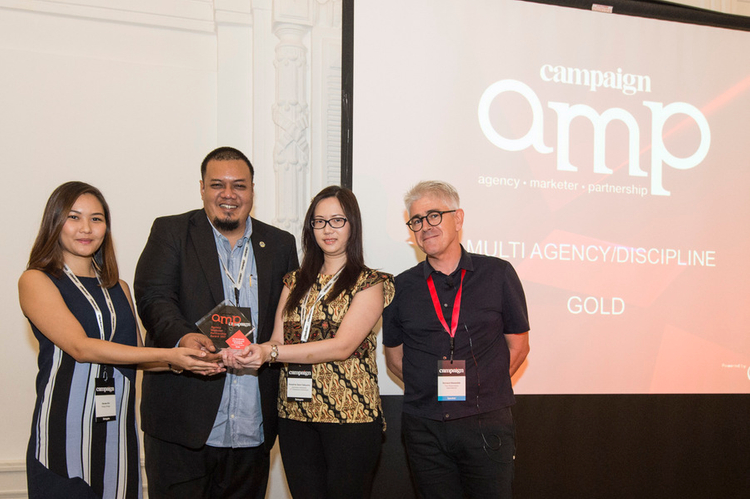 The pictures above were added after the award presentation on August 16.

Campaign Asia-Pacific and The Observatory International announce the winners of the fourth annual Agency-Marketer Partnership Awards, which recognise the region's most effective client-agency relationships.

Though the winners are announced here today, the awards will be presented on August 16 at The Fullerton Hotel Singapore as part of Campaign's Top 1000 Brands Breakfast Briefing. See the awards page for background on eligibility and categories.

​"In its fourth year, our collaboration with Campaign Asia on the Agency-Marketer Partnership Awards has again been highly rewarding and continues to demonstrate the value to both brands and agencies of powerful and progressive partnerships," said Richard Bleasdale, Asia-Pacific managing partner with The Observatory International. "It’s fantastic to see winning partnerships for leading brands across different agency disciplines such as creative, media and public relations, plus, for the first time, a Gold winner in the multi-agency/discipline category. We’d like to thank all entrants again for a really high standard and congratulate them all on the positive impact their partnerships are having to their businesses."

The client credits the work with helping to improve both sales and brand scores—particularly for "meaning", which was a primary objective.

Here's a link to Campaign's original coverage of the 2016 edition of the campaign, and a video associated with it:

This entry encompassed a wide range of work, from 2015 to the present, focusing on both brand reputation and the company's enterprise (B2B) business. Metrics attached to both have seen significant improvements. Judges cited the partners for a high degree of interaction and two-way openness to ideas.

Here are two examples of work the partnership has generated:

The duo have been partners for nine years, during which time the agency's remit expanded from one project to handling 12 premium spirits, champagne and wine brands. Meanwhile the scope of work has grown from traditional PR to strategic planning, media communications, digital and social communications, KOL and celebrity relationshp management, event management and consumer activations.

Here are some images and a video of promotions and events orchestrated by the partners. This entry focused on how the partners defined a shared vision and set of values, based on commitment, and how they maintain their relationship with transparency and frank communication. The partners also pay close attention to the ambitions, progress and happiness of each team member, which has resulted in lower employee churn. The work discussed in this entry involved not only traditional media-relations work but also an effort to build a WeChat-based social CRM system, which helped the commercial property developer deepen engagement with its customers. The agency has instituted many systems and processes to ensure clarity of role responsibilities, sharing of best practices and continuous improvements in performance.