Vodafone has unveiled “Together we can” as a new global brand positioning that “celebrates what the human spirit can achieve when combined with technology”.

The British telecom company is looking to position itself beyond mobile telephony as a broader technology business and has used New Commercial Arts, the London-based agency start-up, for the strategy and the campaign.

Vodafone launched “The future is exciting. Ready?” as its previous brand positioning only three-and-a-half years ago in October 2017 and Anne Stilling, the global director of brand and media, said the company decided to update the positioning “faster” than planned because of the coronavirus pandemic.

Tom Green, who has shot TV series including Misfits and Blackout, has directed the ad, which features a girl travelling the world and asking questions about key issues around inclusion, planet and disease.

Vodafone said the new brand positioning was “inspired by consumer research” that showed the role of technology in people’s lives “has evolved from something that simply excites people on a personal level, to something that plays a more meaningful role in the world at large, in particular, on issues such as sustainability and societal development”.

The reseach showed the growing importance of sustainability for consumers in their brand preferences—with nearly eight in 10 people “indicating that it was key for them”.

The 12-month campaign, which debuts online on 31 March and on British TV on 2 April, will run in 30 markets, including Germany, Italy and Spain, and the slogan will be in English in virtually all countries with only a few exceptions for local reasons.

The ad is booked to air during Gogglebox on Channel 4 on 2 April, Alan Carr’s Epic Gameshow on ITV on 3 April and Man Utd vs Brighton on Sky Sports on 4 April.

Taking responsibility for the role of technology in people's lives

“We came up with the story of a little girl who is the embodiment of what we call the human spirit or humanity,” Stilling said, explaining the ad. “She is really driven by curiosity, optimism and drive. She goes on a journey and she has some big questions.

"She asks: Can we cure every disease? Can we all drive cleaner – and we refer to Formula E [which Vodafone sponsors]? Can we save the planet or save our waste before it’s too late for the planet? Can we make sure no one is left behind?

“And she comes to the conclusion that together with technology, we can do anything.”

Explaining the shift from its previous brand positioning, Stilling said “The future is exciting. Ready?” was “very much around the fascinating stuff we can do with technology” and the sense that technology was still “a bit unknown”.

The pandemic changed attitudes because “the use of technology has got more normal and we’re very familiar with it” and “it has a bigger role to play – keeping people connected in lockdown, keeping the business going, was only doable because of technology”, she said.

“It’s very important that we acknowledge the new role that technology has and also acknowledge the responsibility that comes for a company that now plays such a vital role in our everyday lives and in keeping people and relationships going.”

Previous brand positionings for Vodafone, considered one of the most valuable mobile brands, have included “How are you?” in 2001 and “Power to you” in 2009.

Investing in brand is important to help Vodafone “differentiate” itself and demonstrate it is more than a utility, as it expands in areas such as digital financial services and the internet of things, and “to take responsibility for building a better future that is very much an inclusive and sustainable, digital society”, she said.

Vodafone, like other telecom companies, has faced years of relatively low growth.

Vodafone is keeping some of its familiar branding, including the use of the colour red, the roundel and the “speechmark”, which was first introduced in 1998.

“For a provider like us, where you have mainly products that you can’t grab [onto physically], it’s super-important to have other branding elements – for us, the colour red, roundel and speechmark are super-iconic and really valuable icons and world-class,” Stilling said. 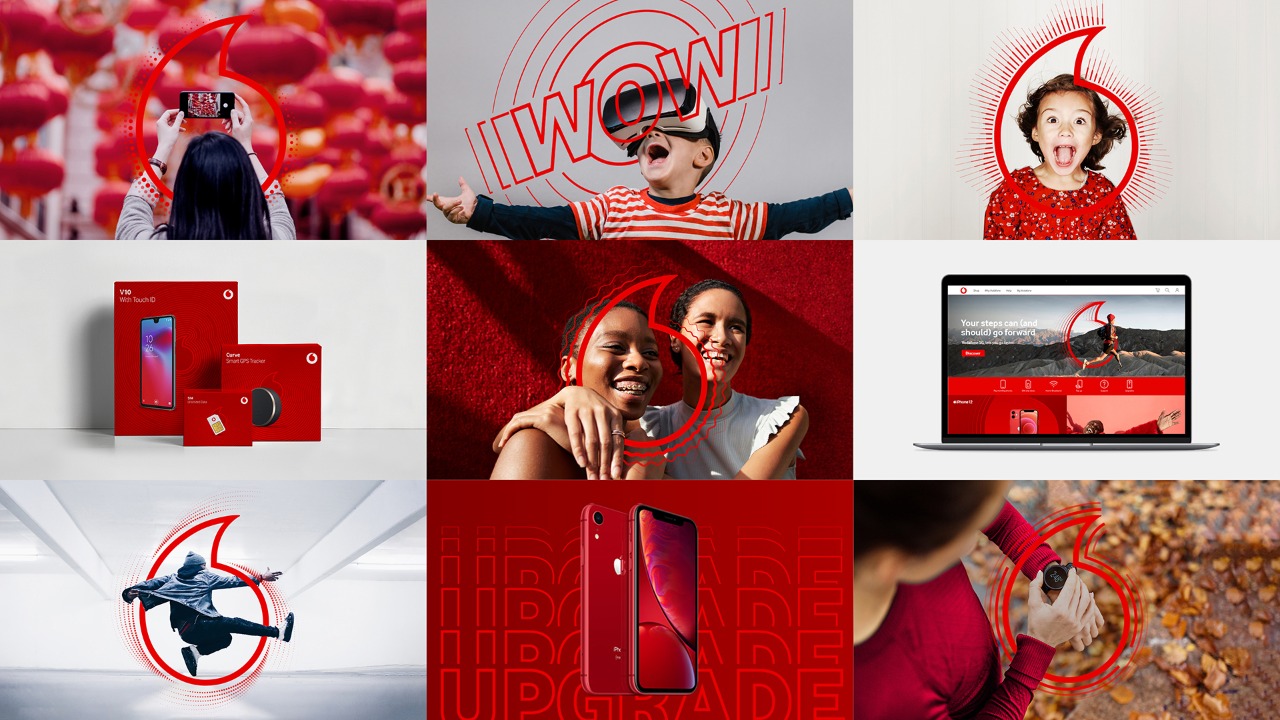 The speechmark—a single, closed quotation mark—will be more “vibrant” and “animated” as part of the brand refresh, which was devised with help from WPP’s Superunion.

Stilling appointed NCA last October, only a few months after the agency’s founders, James Murphy and David Golding, launched the start-up in May, and has not met them in person yet.

“If you had asked me one year ago to do such a project totally virtually, I would have said no way,” she said, referring to the “intense collaboration” that is required for a brand repositioning, but “it did work out better than we thought”.

She felt that the fact that most of NCA’s own staff “hadn’t seen each other in person as well” because it launched during lockdown may have helped to bring client and agency together.

Murphy said: “The pandemic means that so far the entire client relationship and delivery of the campaign has happened without any of us ever having met in person. It’s testament to the spirit of ‘Together We Can’ that the global Vodafone team, their markets and the agency teams have pulled this off.”

Stilling added in-housing digital media-buying “works pretty well” since Vodafone made the move at the end of 2018—a significant step as it reduced the scope of its external media agency at the time.

Handling digital media in-house leads to more integration and greater “speed and learning”, she said. “If you see it in place, it does really make a difference.”

Vodafone's in-house team has seen the “quality” go up and costs come down but demand has also risen because of the “explosion that we all see in digital—with more customised messaging”, Stilling said.

“I would say it is difficult to compare what we had three years ago with what we have now because we need much more output.”