Twitter wants to make content discovery much easier for users and is revamping its mobile app’s camera to encourage more photo and video sharing.

By swiping left on the timeline in the update app, there is now a circular capture button that allows you to take a picture or a looping video of up to two-minutes long.

Speaking to Campaign ahead of the launch, Coleman explained that the company has spent the past year improving how users can interact with, discover and share more content around big events.

While Twitter is popular when people are chatting about breaking news stories or big events, it wants to make it "super easy" for people to see what’s going on without having to know which accounts or hashtags to follow in advance.

"The camera update is tied in with our mission," Coleman said. "Our role has been to build a camera that will really quickly capture what’s happening and get to the audience that wants to talk abut it."

The company is sensitive that some users struggle to find content to engage with aside from big events. Coleman explained: "For TV, if you want to follow the best of the conversation, you will have to follow the best of the Baftas or the official account or hashtag for the show you’re watching. People who are really good at Twitter will do that for the topics they really care about but, for other events, people won’t have their timelines set up for that."

The "big picture", Coleman said, was for the camera to be "really smart". The mobile app can already use geotagging to mark your location while tweeting, but Twitter wants it to then know automatically what event you are at and connect with other users who are interested in that event.

"Twitter has long been good about sharing a spot with the world but it hasn’t been easy to share what’s literally happening in front of you, and to emotionally connect with what’s going on as well," said Coleman.

The changes present a change in strategy for Twitter, which had appeared to have ceded image-sharing as a USP to Instagram and Snapchat.

However, Coleman insisted Twitter would remain distinctive even if its new camera tools were seen as trying to ape those of its more camera-focused rivals.

"Twitter is fairly unique, there are a lot of cameras in the world but we know that people come to Twitter to see and talk about what’s happening. This camera is another tool to serve that and see what their friends are doing." 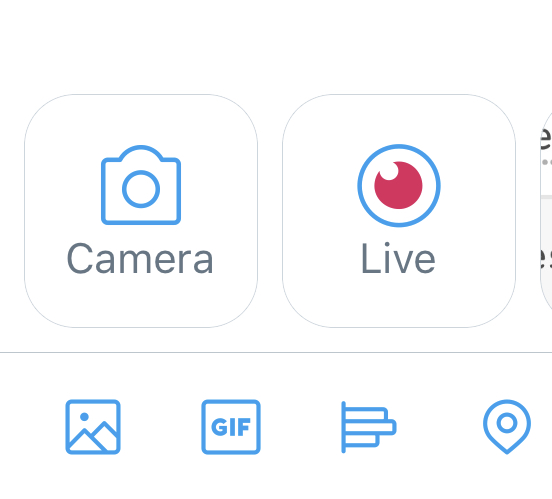 New circular button for live-streaming on the Twttr testing app

While the San Francisco-based company sees "opportunities" in integrating augmented reality into the Twitter camera, Coleman said it is focusing on getting discovery right first.

The new live-streaming function features no Pericope branding in the test version that Campaign used, even though it is still using Periscope’s tech.

Twitter bought the video-streaming company in 2015 and Coleman admitted "this effort is subsuming a lot of Periscope. We’ve been working over time to bring Periscope into Twitter."

Last month the company revealed it was launching a prototype app that it would use to beta test updates among a group of about 2,000 users. This week it launched the test app, called Twttr.

A body-positive model and artist presses brands and ...