The sheer scale of lost adspend, disorganisation and murkiness in the programmatic advertising supply chain has been laid bare in a first-of-its-kind UK report by trade body ISBA and auditors at PwC.

The advertiser-funded ISBA Programmatic Supply Chain Transparency Study found that only a fraction (12%) of 267 million ad impressions, paid for by brands to be served on publishers’ websites, could be accounted for or "matched".

The rest could not be mapped due to low data quality, analysts from PwC found, citing huge difficulties in getting like-for-like data from various players in the ecosystem.

From that fraction of ads that were matched, PwC found that, on average, nearly one in six (15%) of advertising pounds spent on these ads are being lost in the system. This "unknown delta" represents money that is spent on programmatic ads but can’t be found to have been delivered as an ad that an internet user has actually viewed. 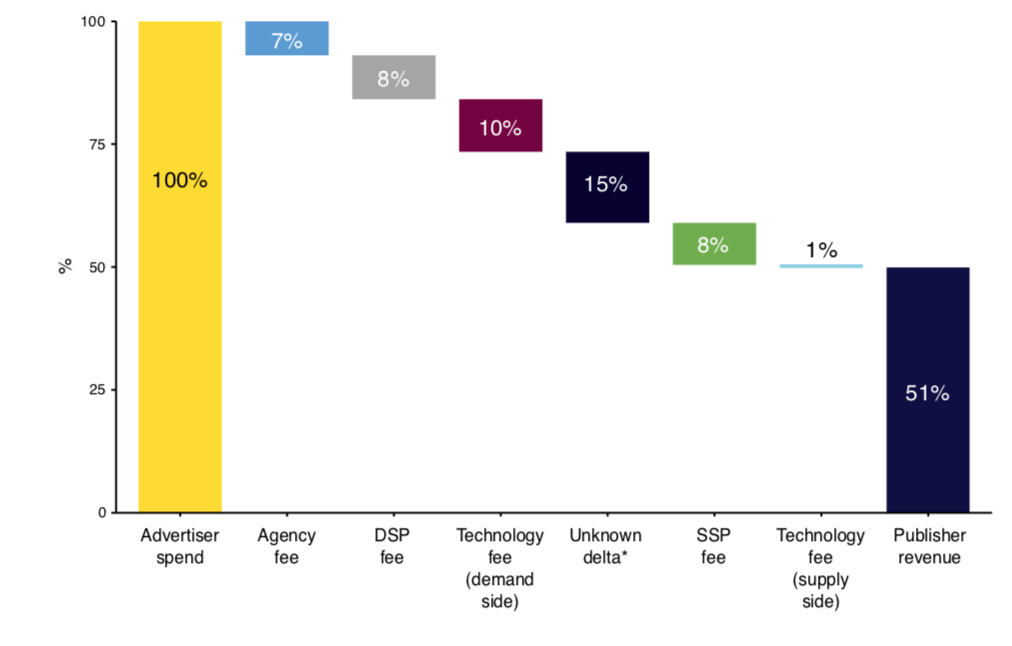 Meanwhile, just over half (51%) of spend is received by publishers, with the remainder going towards various fees charged by demand side platforms and supply side platforms.

However, Sam Tomlinson, partner at PwC, told Campaign that the true amount of unaccounted inventory and spend in the programmatic system is likely to be higher than the report shows, given that this study focused on premium advertisers.

Tomlinson said: "This is a snapshot of the most premium end of programmatic. We think it would be a safe hypothesis that if you looked at unmatched impression on the longer tail of tech vendors, absolutely you would find less money reaching publishers – a larger unknown delta."

While ad fraud may be a significant driver on why programmatic adspend is being lost, Tomlinson stressed that the purpose of the study was to look at matched impressions (impressions would not be matched if lost to fraud).

"We don’t think that programmatic is Machiavellian; we just think it's a mess because of the way it has evolved," he added.

BT, one of 15 advertisers that took part in the research, is now warning that it will cut back on programmatic media spend if the industry does not come up with common standards and more openness.

Graeme Adams, head of media at BT Group, said: "While digital display is an effective sales driver for us, the findings of the study are stark: there is a big hole in the value chain.

"We desperately need to see a common set of standards adopted and more openness in this market, so that every penny spent is accounted for. If this happens, we’ll invest more in the channel; if not, we will cut back and reshape our trading approaches."

The study, run over 15 months in association with the Association of Online Publishers and carried out by PwC, marks the first time that programmatic advertising supply chains – the way in which advertisers and publishers are served by the programmatic ad delivery system – have been mapped from end to end anywhere in the world.

Danny Spears, chief operating officer at The Ozone Project, which handles digital advertising for The Guardian, Reach, the Telegraph and News UK brands, told Campaign that he was not surprised that only 12% of impressions could be matched in the study, given that the supply chain "has been deliberately designed with opacity in mind".

He added: "It's definitely a worry for publishers and it should be for marketers too… Revenue is lost through these mechanics as a result of obfuscation, manipulation, unilateral adjustments and other means of value extraction, and in such a way that neither buyer nor seller knows what really has happened. This is particularly prevalent in open market programmatic, where there is significantly less traceability and accountability than with premium publisher deals."

Spears noted that he sees publishers becoming more selective with the partners they work with and the terms on which they do business. While some work with a small numbers of SSPs, others choose to work with more in order to benefit from a greater volume of ad impressions.

Tomlinson told Campaign: "We would be supportive of publishers using less SSPs and manage them more closely."

ISBA and PwC are making two recommendations to improve transparency in the programatic supply chain: standardisation across a range of contractual and technology areas to facilitate data-sharing and drive transparency; and industry collaboration to further investigate "the unknown delta". 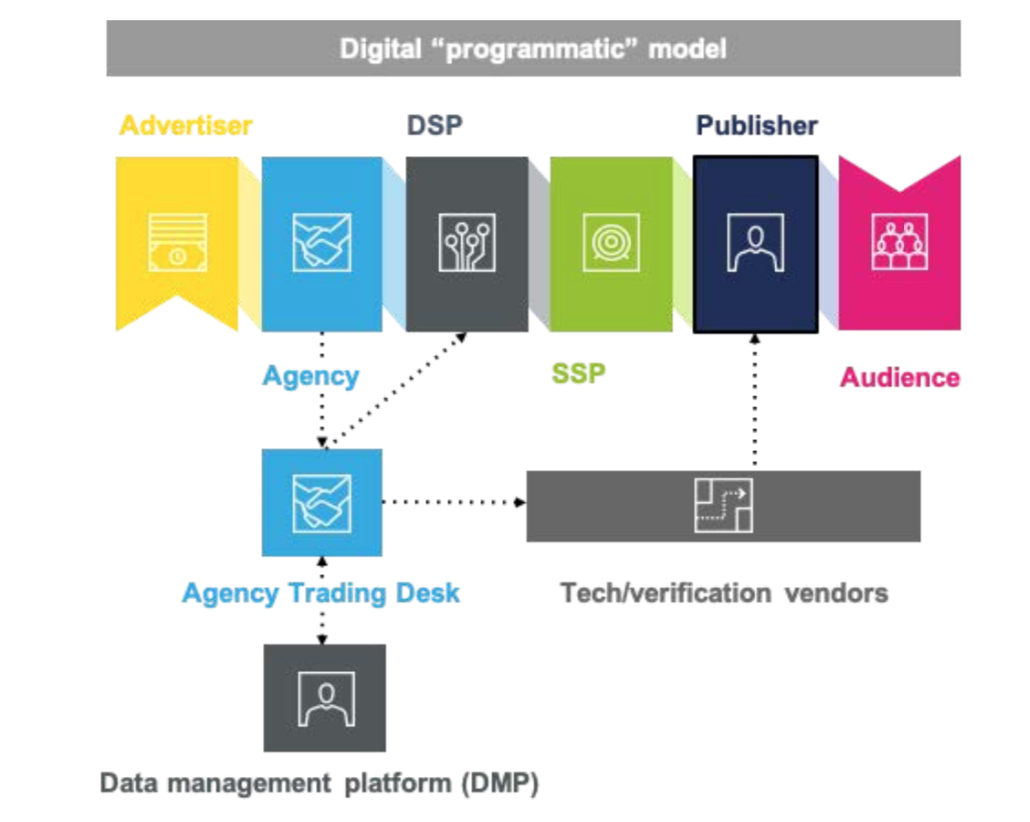 The findings complement a scathing report last summer by the UK data watchdog, the Information Commissioner’s Office, that heavily criticised the real-time bidding trading system. While that report focused on user data protection, it also pointed to a system failure in adtech vendors when it comes to compliance and data handling. Campaigners, chief among them ad-tracker-blocking browser Brave, have warned that this form of ad trading is an industrial violation of the European Union's General Data Protection Regulation.

Johnny Ryan, Brave's chief policy and industry relations officer, said of the latest ISBA report: "[It] forensically confirms that conventional 'adtech' is opaque and largely immeasurable, despite its intrusive tracking.

"Not only are advertisers’ return on investment untraceable, but publishers are haemorrhaging revenue through unaccountable costs, fraud and audience arbitrage. Advertisers are waking up to the need to find more sustainable and accurate ways of marketing online."

The study identified more than a thousand distinct supply chains and, across the 15 advertisers, the PwC team of media/programmatic experts and data scientists could match only 290 chains (31 million impressions) all the way to the 12 publishers.

PwC said its analysts came up against a lack of understanding and consistency among the adtech suppliers as to how they could legally share data and what permissions were needed. They also found a general lack of uniformity on data storage and formatting, and the fact that data captured by a DSP for an impression is not equally captured by SSPs – something that hindered impression matching. 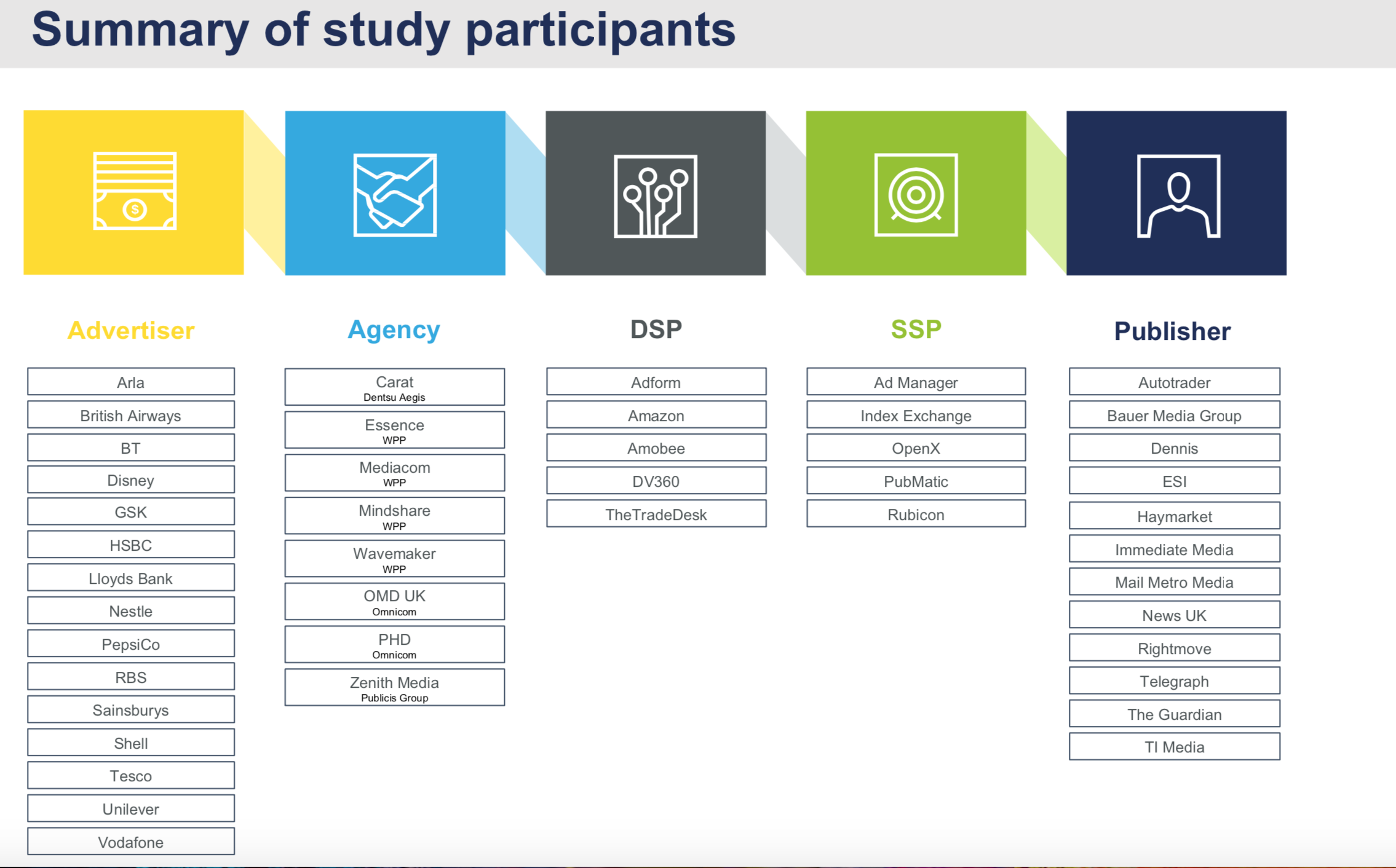 Brands that took part include Unilever, PepsiCo, Tesco and Vodaone, while publishers included News UK (The Sun and The Times), Bauer Media and Haymarket, publisher of Campaign.

ISBA, which represents more than 3,000 brands in the UK, said it will now immediately set up a cross-industry task force that will begin work on "studying the causes of the unknown delta". Separately, ISBA has pledged to shape an independent piece of work on standardisation and data-sharing.

Phil Smith, ISBA’s director-general, added: "The publication of this study marks an important moment in our understanding of online advertising supply chains. It is the first time anywhere in the world that an attempt has been made to map a system which is not capable of being audited… The challenge now is for industry to come together, as they will in the new task force, to drive industry standards and create transparent supply chains to allow companies and consumers to benefit properly from online advertising."