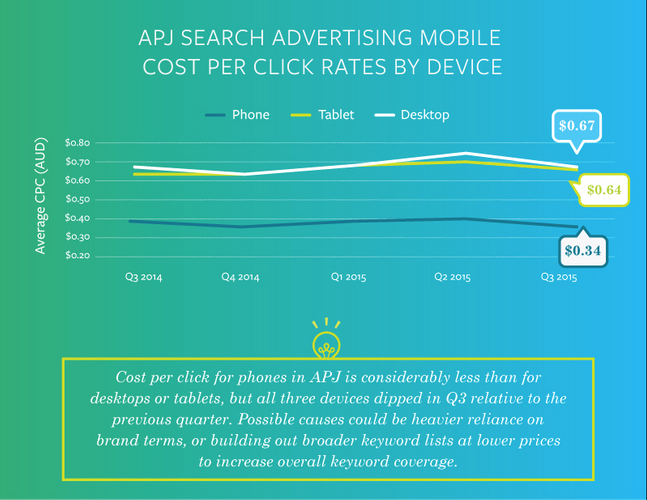 Spend targeted at smartphones and tablets increased by 159 per cent year-over-year (YoY) for social advertising, while spending growth in search advertising jumped 66 per cent in the third quarter ended 30 September.

The rise of mobile has been phenomenal in the past year, according to the digital marketing technology company.

At a global level, paid social advertising continues to grow as new entrants come into the market and existing marketers raise budgets.

This has driven social ad spend up 112 per cent in the past year, supported by the underlying 159 per cent increase in mobile advertising investment.

Overall cost-per-click (CPC) is up 21 per cent in the past year in social advertising, and despite impression levels steadily dropping, the volume of clicks on ads has continued to increase, rising 75 per cent.

Social ad campaigns are continuing to deliver improvements in engagement levels with clickthrough rates climbing steadily over the past five quarters, rising by 174 per cent in the past year.

Chris Costello, director of marketing research for Kenshoo, said the third quarter continued the mobile growth trend from the first half of 2015.

“Consumers rely on mobile devices more than ever, and advanced marketers are following suit with increasingly optimized campaigns which delivered positive results in both paid social and search,” he added. “As publishers expand and refine their mobile offerings, marketers should expect to continue improving performance heading into the holiday season.”

With Facebook recently revising the definition of CPC to focus on link clicks rather than engagement clicks such as likes, comments and shares, the company expects marketers to see improvements in overall campaign effectiveness in coming quarters.

The company also expects recent changes to Facebook's Marketing API, designed to make bidding and optimisation processes simpler, to cause initial fluctuations in CPC as marketers become attuned to these updates.

Overall spend on paid search advertising grew by 8 per cent in the third quarter, fuelled entirely by the 66 per cent rise in budgets allocated to smartphone ads, while search ad spend on desktop and tablet ads was down 3 per cent over the period.

Overall search clicks were up 16 per cent, outpacing growth in impressions (3 per cent) and leading to a 12 per cent rise in CTR across all devices. The increased activity on smartphones meant a rise in the number of ad impressions on phones and a greater than 100 per cent increase in phone clicks compared with 2014.

The increase in phone spend and clicks has helped to drive overall search CPC down by 7 per cent (as clicks on smartphones are priced slightly lower than desktop and tablet clicks).

The data is presented in the Digital Marketing Snapshot, Q3, 2015 infographic, highlighting key quarterly global metrics and benchmarks for paid search and social advertising based on 550 billion impressions, 11 billion clicks and US$6 billion in advertiser spend funnelled through the Kenshoo Infinity Suite.