The most telling slide during Mark Read’s debut investor day showed just how much WPP was struggling before Sir Martin Sorrell stepped down—not that the former chief executive rated one mention during an event that lasted five-and-a-half hours.

Andrew Scott, WPP’s chief operating officer, admitted that only three of its top 10 agencies grew and only 12 of its top 30 clients increased their spend with the group last year.

They are brutal statistics that go a long way to explain why WPP’s share price fell from a peak of £19 to £11—a drop of £8 or more than a third—during Sorrell’s final year in charge.

The stock has tumbled another £3 since Read took over from his former mentor, who is now a disobliging critic on the sidelines.

Return to growth could be a long time coming

Read did not wear a tie, unlike his younger rival, Arthur Sadoun of Publicis Groupe, at his investor day in London in March, as he struck an understated, "contemporary" tone.

He told financial analysts at Sea Containers, WPP’s new headquarters overlooking the Thames, that he wants to turn the advertising agency holding group into a "creative transformation company" for clients.

The truth is that it is WPP that badly needs creative transformation, as Read all but admitted after two years of declining net sales in 2017 and 2018 at a time when the wider ad market has been growing steadily.

Hence Read’s presentation carried the insistent headline "The new WPP" and he unveiled a new company logo, with the letters of the name made up of lots of small, colourful bubbles to symbolise its many parts and its "open", "optimistic", "extraordinary" culture.

He is promising a "strategy for growth" that will focus on four areas: communications (traditional advertising, PR and branding), customer experience, commerce and technology.

Yet growth could be a long time coming. Read pointedly declined to promise a bounceback in 2019 as recent account losses such as Ford’s creative business mean WPP faces a revenue "headwind" of -1% or more.

He only offered to match the organic revenue growth of "peers" by the end of 2021. Analysts repeatedly quizzed him on what that peer growth rate might be (3%? Or 4%?) but he refused to give a number.

Still, Scott promised to spend less money on acquisitions (£200m a year, mainly on "technology and commerce") and to slash the number of offices by putting staff in shared sites, so costs should be lower.

Read’s view is that WPP doesn’t have a cost problem, even though he is cutting 3,500 jobs or about 3% of the 130,000-strong workforce. It’s a revenue growth problem, he says.

He made a persuasive and nuanced case to investors that WPP needs to balance profit margin and sales growth—setting a relatively modest 15% margin target, down from previous heights under Sorrell, but ruling out a cut to the 13% level set by rival Interpublic as he wants WPP to do smarter, higher-value work, not just take out costs.

Betting on being a technology and commerce consultant

Investors know some of Read’s message already because he has been pushing it since April: WPP needs to be simpler to navigate for clients, with fewer stronger agency brands, a more consistent use of technology across the group and a more open, collaborative culture.

He says there will be no more "major agency network mergers" after Wunderman Thompson and VMLY&R—both tie-ups between creative and digital shops, although he wants to ban the word "digital" at WPP because technology should pervade everything.

His big pitch to investors is that the new WPP "gets" tech companies such as Google, Amazon and Alibaba and can work well with them on behalf of clients.

"Technology will be at the heart of WPP’s transformation," one slide declared.

So much so that Read’s vision for WPP sounded at times like he wants it to be more like a technology consultant than creative agency partner, although he stressed he will "put creativity back at the heart of WPP".

Google and Adobe, in particular, featured heavily during the day—both as tech platforms and as WPP clients. (Google’s Matt Brittin, Adobe’s Bridget Perry and Unilever’s Keith Weed joined Read on stage for a softball chat at one point.) 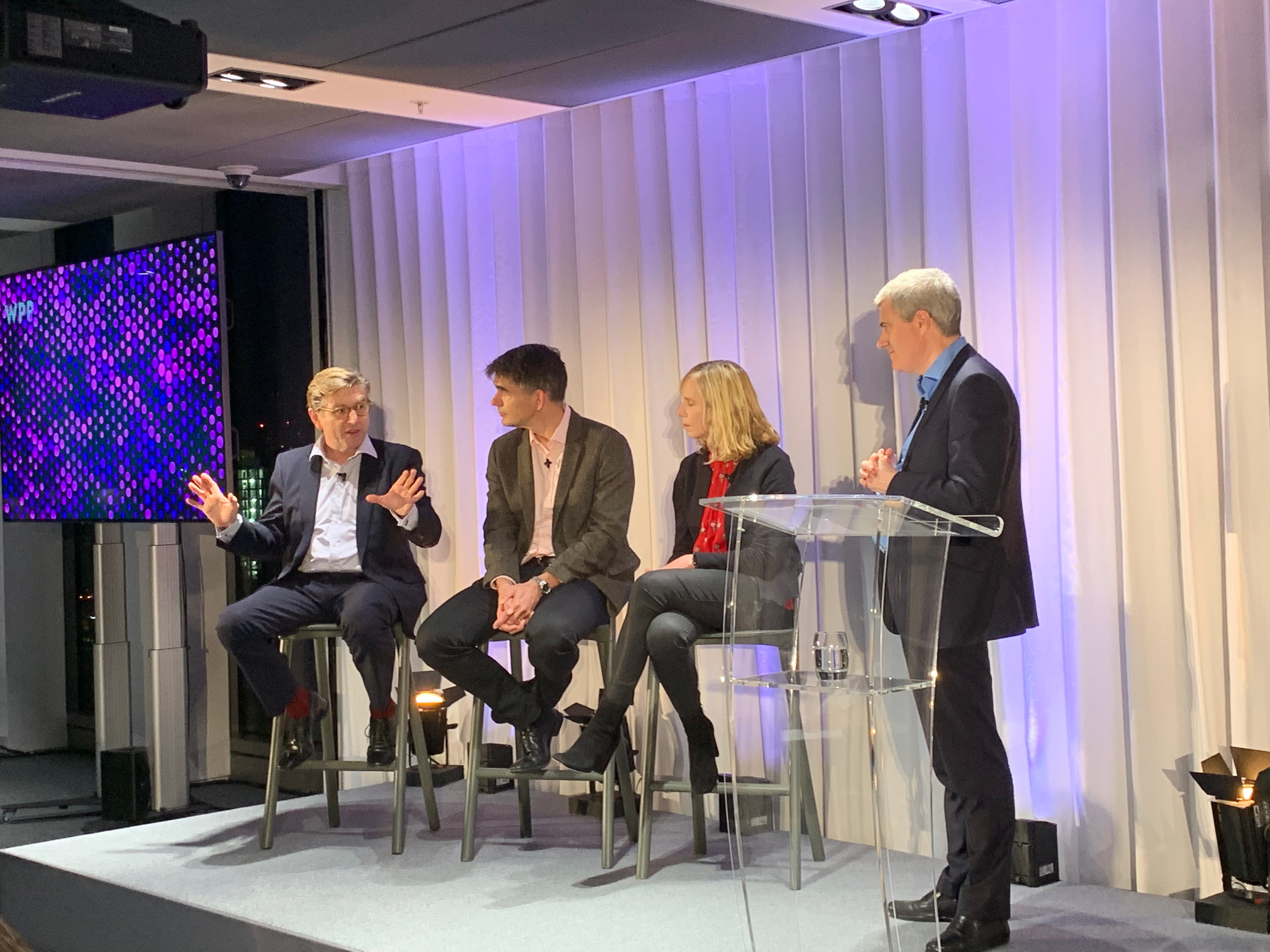 Stephan Pretorius, the newly appointed chief technology officer, who previously worked with Read at Wunderman, gave an assured performance, explaining how he believes WPP needs to understand data, not own it (hence the sale of Kantar), and it can manage marketing technology better than consulting giants such as Accenture.

Other notable WPP speakers included Christian Juhl, chief executive of digital agency Essence, who talked about how automation can speed up work and allow staff to focus on higher-value tasks; Patrick Xu, WPP China country manager, who showed how the company is working with a lot of new-economy Chinese brands that few in the West know; and Karen Blackett, WPP UK country manager, who vowed to do more to recruit more widely beyond the usual agency talent pool and to improve diversity.

WPP agency leaders showed a lot of videos about their campaign work, but it began to feel repetitive after more than a dozen clips and Read and his team said little about how they have been winning new clients—a key issue when it has been losing revenue.

There was no mention about how Wunderman, rather than J Walter Thompson, led the successful defence of Shell earlier this year, or how MediaCom worked with Wunderman to expand its Mars’ remit.

It also felt like a missed opportunity to showcase personalised, dynamic creative—a huge boom area (and something that Publicis Groupe did well, with examples from Experian and BT, at its investor day).

There is never time to include everything, but it was notable which parts of WPP received little or no attention—particularly creative networks Ogilvy and Grey, media buying unit Group M and its big agencies MediaCom, Mindshare and Wavemaker, as well as the PR and branding divisions.

WPP is talking up creativity but John O’Keefe, the worldwide creative director, wasn’t on stage. Roberto Quarta, the chairman who won the boardroom battle against Sorrell, was absent.

The companies and clients that Read highlighted felt like what he wants WPP to be, not the reality of where it is now, and he has yet to make any big, external hires that will give a clue about what his new management team will really look like.

It is still early days, since Read is only three months into his tenure as chief executive. Some WPP colleagues say he needs to pump up the energy and inspiration levels, but body language and tone of voice depend a lot on confidence and momentum.

When we look back in a few years, this moment will just feel like part of the immediate post-Sorrell blur.

Investors were relieved that Read promised to hold the dividend, rather than cut it, and he did not have worse news on revenue growth—sending the shares up 5% to a still-modest £8.50.

Ian Whittaker, an analyst at Liberum Capital, who attended the investor day, declared at the end: "This is not a company falling apart."

But that verdict is a good indication of how far WPP has fallen. Going back to that slide that Scott showed, WPP hopes that more than eight of its top 10 agencies and more than 20 of its top 30 clients will be growing by 2021.

Rebuilding and reshaping WPP is going to be slow.