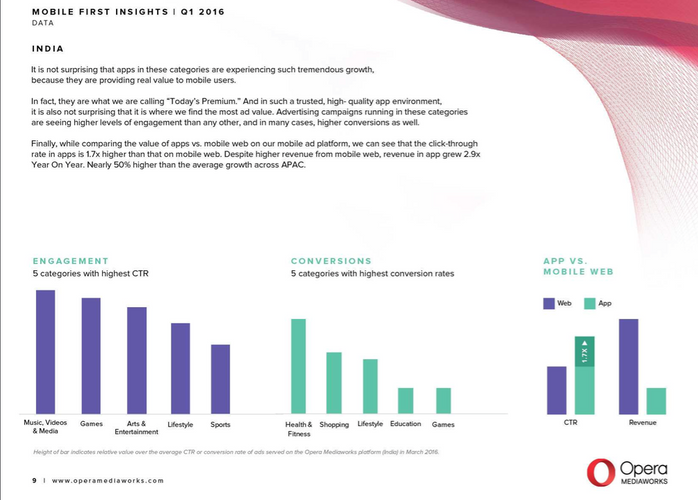 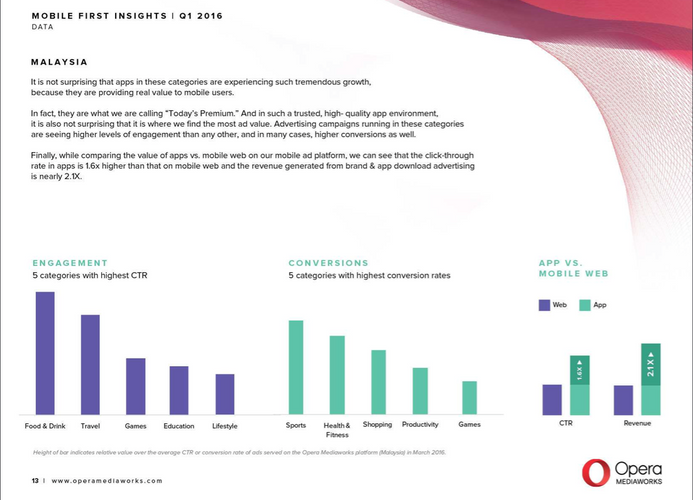 ASIA PACIFIC - In-app advertising is overtaking the mobile web channel across almost all Asia Pacific (APAC) markets, according to a new report by Opera Mediaworks.

Clickthrough on apps was found to be between 1.3 times to twice as high as mobile web clickthrough in all surveyed countries.

App advertising revenue surpassed the mobile web channel across most APAC markets, by as much as 13 times in Singapore and Thailand. Only in India and Indonesia is revenue still higher from mobile web.

Vikas Gulati, Asia MD at Opera Mediaworks, said that it is “fascinating” to see that some trends, such as high usage of gaming, are reflected across almost all Asia Pacific markets, despite the range of cultural, social and economic factors that vary between countries in the region.

Other report highlights include:

Looking at data from the top 100 apps that use Opera’s mobile ad platform to monetize their traffic, the report found that mobile users in Asia Pacific are spending about 46 minutes each in each of these popular apps—longer than the global average of 30 minutes.

The average session length of mobile users in Asia Pacific was 9.6 minutes, also longer than the global average of 8.5 minutes.

However, two markets showed differing results: India, where app usage is concentrated in the category of Music, Video and Media; and Indonesia, where a tech-savvy youth market is driving high usage of Technology and Computing apps.

However, the ads on Game apps do not necessarily have the highest conversion rates nor enjoy the highest click-through rates. Ads on Sports and Health & Fitness convert better than other categories in most APAC countries, except Australia where ads on Shopping convert the best.

SDK technology is key for targeting

Technology can mean the difference between a poorly targeted campaign and a highly accurate one, the report found.

Advertisers that work with a mobile ad platform—as opposed to directly with a media company—must be assured of direct SDK (software development kit) access in order to increase the likelihood of reaching highly targeted audiences.

“It’s really about creating a trusted relationship between publisher and advertiser, which ultimately leads to greater opportunity for optimization and better outcomes against advertiser KPIs,” said Gulati.

The report shares two mobile advertising campaigns that are prime examples of purpose-built creative, that is, creative solely made for mobile, which often leverages the native hardware and software capabilities that are built into mobile devices.

Mobile ad-blocking has invaded Asia and it's here ...