To celebrate the launch of animated series Arcane, based on the universe in the League of Legends video game, Riot Games created a global brand campaign that went up in flames.

Experiential activations were unveiled in a phased approach across Paris, London, Madrid, Istanbul, Singapore and Los Angeles. In phase one, hoardings went up in the six cities, with AR components that allowed passers-by to learn about unique artefacts known as "Hextech'', which would ostensibly be housed in the stores upon opening.

In phase two the hoardings come down and the fascia of the stores was revealed, complete with interactive window displays that enabled people to use their mobile phones and gesture controls to play games.

This serial approach mirrored the phased release of the show, which premiered on Netflix globally on 6 November, with episodes released weekly. 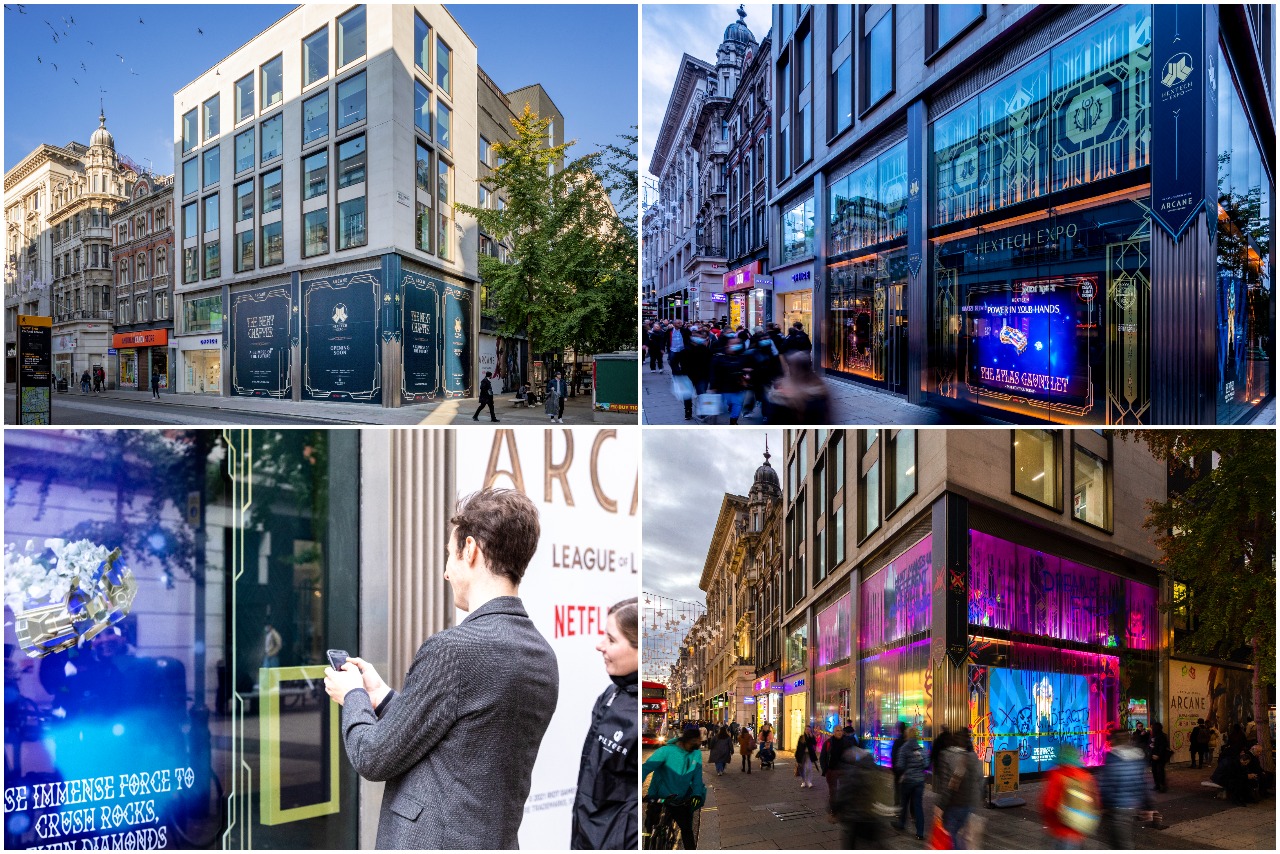 Despite Riot Games wanting a large-scale global project, the team at We Are Collider were meticulous about the smaller details. The first iteration of League of Legends was released in 2009, since when it has gone on to become one of the most-played PC games globally, with a fanbase that has dedicated years to competing. According to SuperData's Year in Review report, League of Legends generated $1.75 billion in revenue for developer Riot Games in 2020. The brand was keen to deliver a project that would live up to fans' expectations.

Talking about her time producing the Arcane campaign for Riot Games, Natasha Blevins, creative director at We Are Collider, says there was a "go big or go home" approach coupled with a focus on delivering a level of detail the most dedicated fans would admire.

She adds: "As well as going big, we had to go unbelievably small and unbelievably detailed because our community is so engaged. For many of them, they've been around this game for decades. We had to be really clear that we would stand up to that kind of microscopic scrutiny by the community. So if anything was wrong in terms of the language we used, or the characters, we would be called out as fakes and that would have had a detrimental effect on Riot Games.

"To that extent, I feel like I could go on Mastermind now and choose the subject 'Arcane the series' [as my special subject], because all of us watched it several times at different speeds, sometimes going frame by frame."

After close analysis of the show, Ian Coles, creative studio lead at We Are Collider, mapped out the different visual styles of protagonist Jinx, who is played by Ella Purnell. Jinx starts off very childlike so the letters that she writes are open and lowercase and very free. By the end of the series, she's an angry young woman and her handwriting has become capital letters in scrawl. Coles was able to draw upon this visual language that changes through the episodes, reflecting the changes across the experiential stores, therefore giving the activations a sense of authenticity. 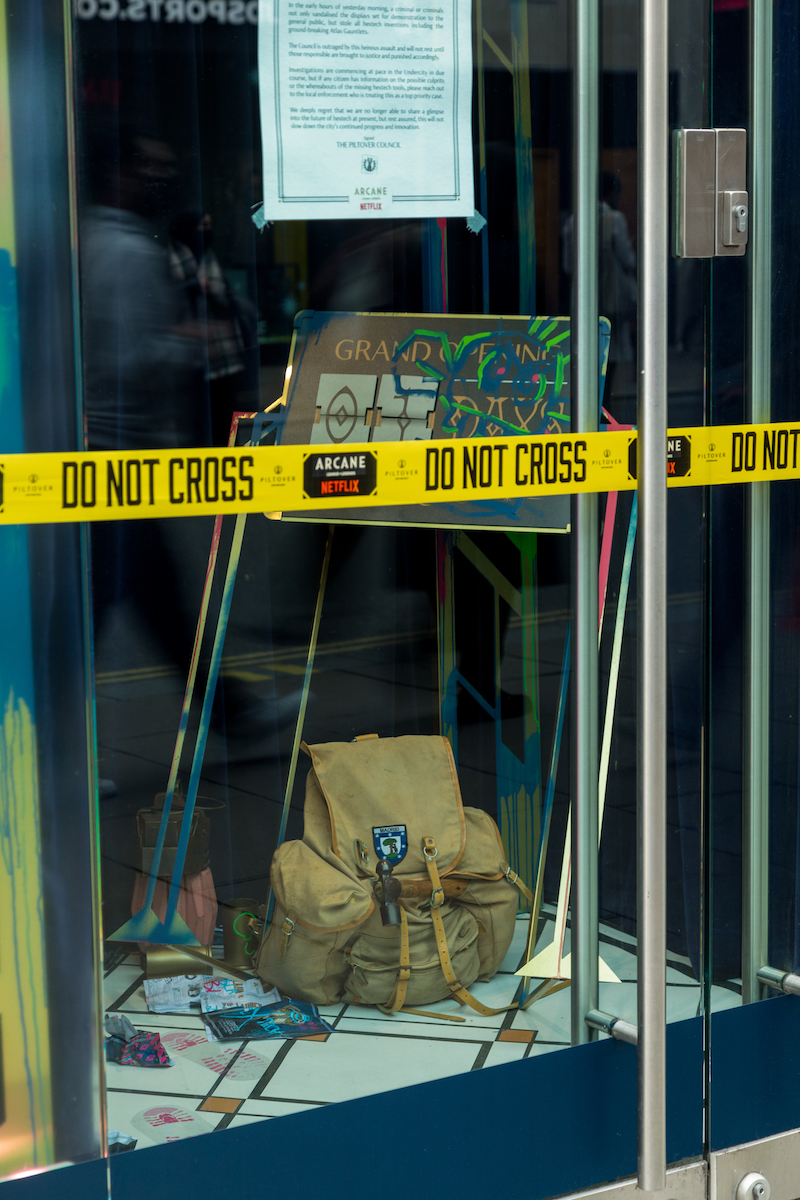 On social media, visitors were able to talk about the details they had noticed and make comparisons between each of the stores. The stores even contained teasers as to where the next destruction was going to happen.

Belvins says: "In the London store, left just inside the door was a backpack that had a little hand-stitched Madrid pin badge on it with a hammer, because Madrid was very much going to be about smashing glass. So there are all these clues woven throughout for the community. You don't need to lay it all out for them. You just need to put in a few breadcrumbs and they will grab it with both hands and run with it. They are the most engaged, passionate, committed audience I've ever worked with."

The activations took place over four days at each destination: in Paris from 4 to 7 November; London from 6 to 9 November; Madrid from 8 to 11 November; Istanbul from 11 to 14 November; Singapore from 14 to 17 November; and Los Angeles from 17 to 20 November. The destruction occurred on the final day of the display and was live for about 24 hours.

There are elements from the destroyed activation that people were able to take away with them as souvenirs, such as leaflets that have been destroyed and trampled over and cordon tape. In LA the activity included a smashed up yellow taxi, a fallen lamppost and pyrotechnics.

But the pop-ups were always designed as something that might be seen in person by a few, but engaged with on social media by many. The campaign was launched by lighting up the Burj Khalifa in Dubai, and a YouTube video of the stunt has been viewed more than 600,000 times.

Mark Cox, European director of brand at Riot Games, says: "It touches a small number of players but ultimately the digital reach of that gets all the other players super excited there behind the screen. So we felt it was a great way to do something innovative as we bring a new entertainment product to the players. It's allowed us to really step up those boundaries and break the norm. I think the Burj Khalifa [in Dubai] is a great example of that.

"The Burj is the tallest building in the world and we put an Arcane ad on it. That was the statement that players saw and it made them just realise 'Wow, this game is the thing I invested in for the last seven years and some people didn't understand.' Now they have people saying: 'I saw that League of Legends thing on the Burj Khalifa or on the Pyramids of Giza in Egypt.' It begins to establish credibility for the passion they've had for many years and others have never really understood. It's a celebration for the players to see their universe spill out into the real world and other people take note and actually understand the size and scale of League of Legends." 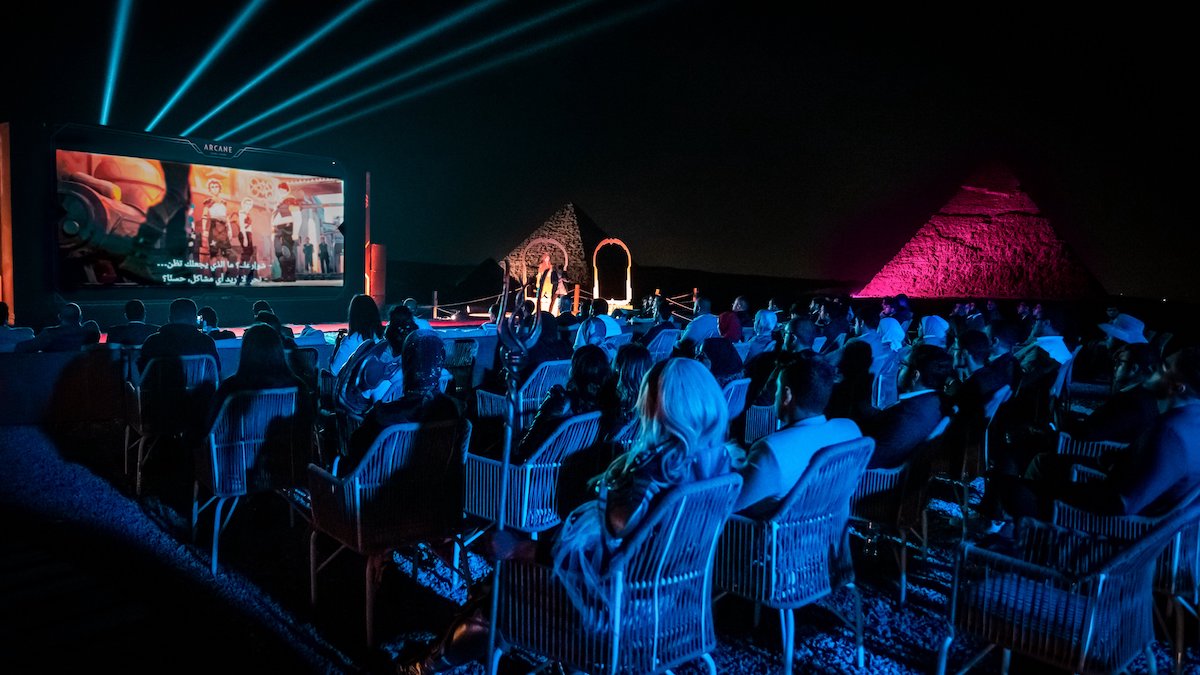 A creative toolkit allowed regional teams across Europe (Berlin, Prague, Moscow) to deliver the creative concept through a range of out-of-home spots including billboards and murals.

Tracy Sorgiovanni, director at We Are Collider, adds: "This is such a great example of something that we're not doing to drive people to a live activation. We're doing it to create content that will engage the community online. It's an experienced by few seen by many strategy, which I think is going to be quite key to the future of experiential in a post-covid digitally focused world."

Hennessy and NBA sail through London on floating ...