New research from Edelman shows that a majority of consumers (59% of respondents) now view geopolitics as a top priority for business. Edelman surveyed 14,000 consumers across 14 countries over the past month.

“The CEO is expected to be the face of the new geopolitical corporation,” said Richard Edelman, the agency’s global chief executive. “Over 60% of respondents are saying that the CEO should shape policy debates on continuing to do business in Russia.”

The special Trust Barometer survey found 47% of customers had bought or boycotted brands based on the parent company’s response to Russia’s invasion of Ukraine. And nearly everyone surveyed (95%) expected businesses to act in response to an unprovoked invasion, from applying political and economic pressure through to publicly speaking out against the aggressor. 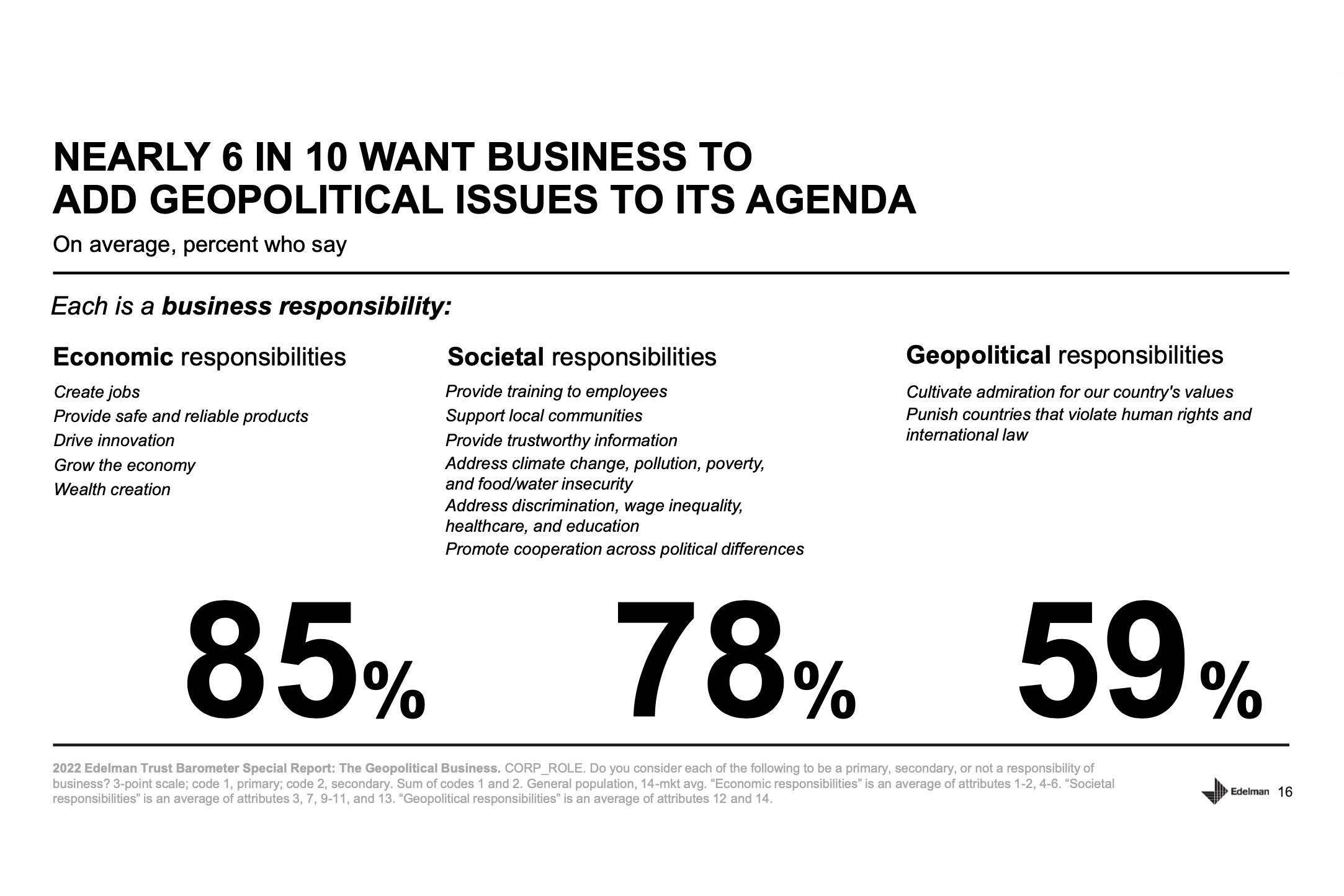 Two and a half thousand political, business and media leaders are gathering in Davos this week, where responses to the Ukraine war will be high on the agenda.

More than 1,000 western companies have ceased operations in Russia since the invasion began in late February, some taking a ‘leadership’ decision early on, others pulling out after consumer and media pressure to do so. McDonald’s recently announced that it was selling its entire operation in Russia.

And Edelman’s research suggests such consumer demands on brands will be permanent and extend beyond geopolitics, towards stronger positions on climate change. 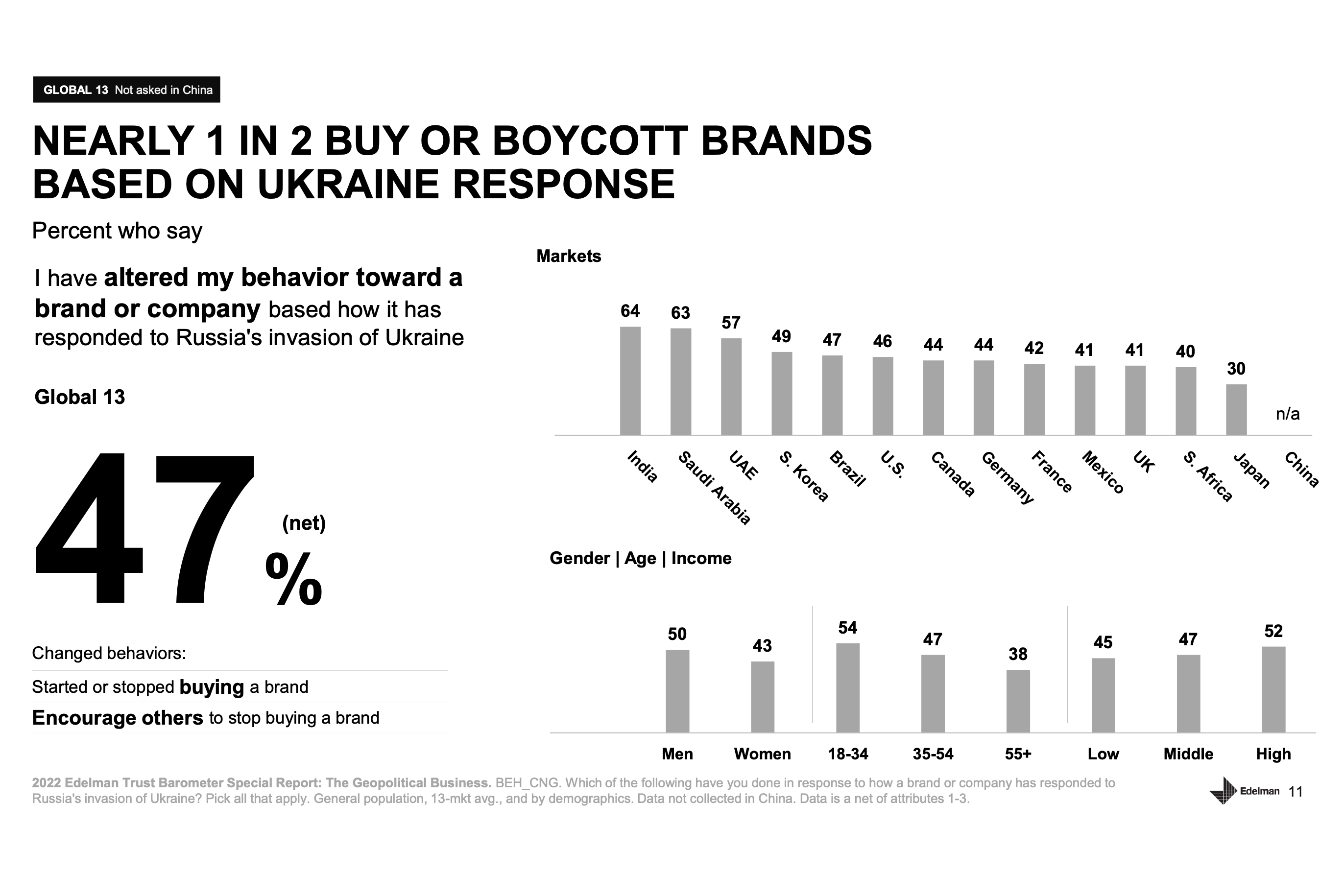 When consumers were asked what the first order of business today was, they responded ‘financial stability and economic performance’ (85%), but 78% of respondents also now believe improvement of societal issues to be a primary function of businesses and brands.

Edelman admitted there would be inevitable trade-offs among economic, societal and geopolitical objectives; the smart CEO will make decisions based on both ability to do business and being aligned with corporate values. 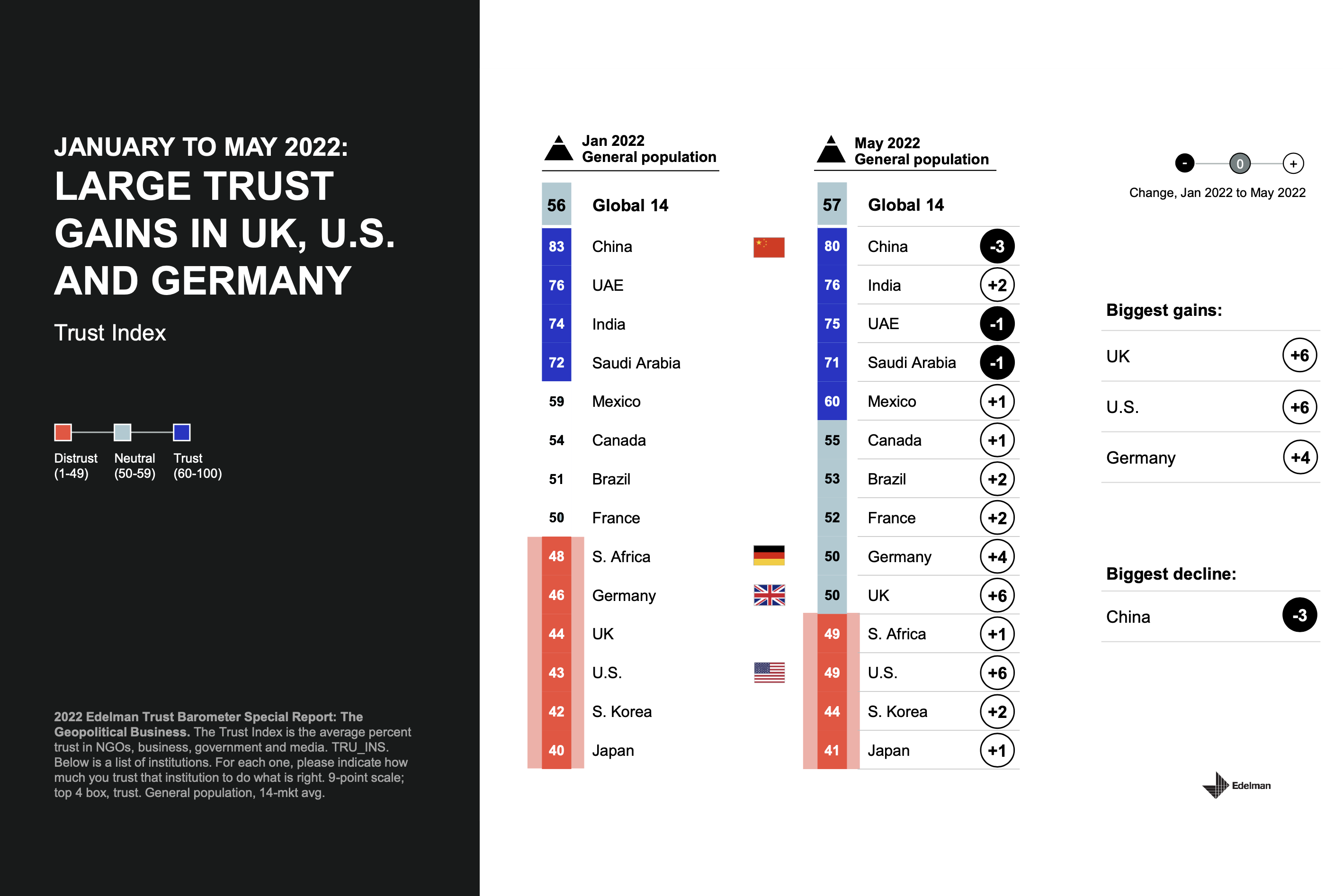 Edelman, which published its main annual Trust Barometer at the beginning of this year, found that generally, trust in ‘developed democracies’ had collapsed in January. But this special survey, timed for Davos 2022, reveals that trust may now have bounced back including in the US (+6 points); UK (+6); Germany (+4) and France (+2). Conversely, China dropped three points.

There was a bump in trust in all four main societal institutions, led by government (up three to 56%) but business is still most-trusted at 62%.

“But there is a huge watch-out,” warned Edelman. “The trust gains are largely among those in the top quartile of income earners, while the lowest quartile has remained stagnant; as a result the income-based trust divide (17 points) continues to widen. Trust among high-income individuals rose three points compared to just one point among low-income respondents.”

Edelman to cut 390 staff globally due to pandemic ...