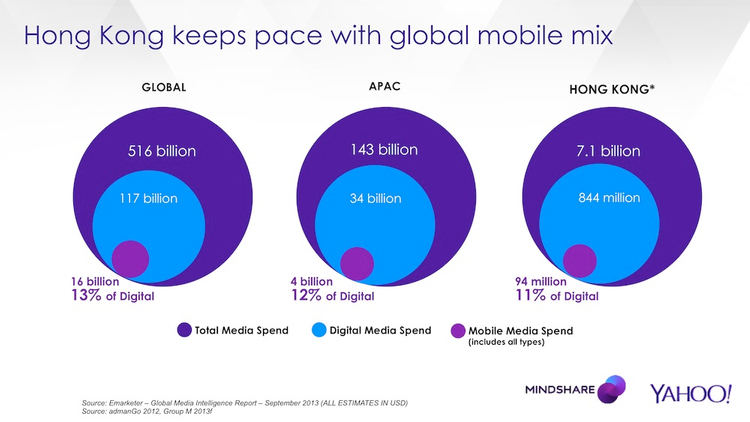 You’re in a store looking at an item, maybe a new gadget or just a shirt. You want it but you don’t buy it. Instead you take out your phone and start browsing for information about it: price comparisons, product reviews, social media opinions, SMS input from friends and family. All that digital information influences your purchase. After that investigation you might make an in-store purchase or you may just go home instead, fire up the desktop, and order the item online. But either way, you made your choice while looking at your phone.

If that scenario sounds familiar then you are a Hong Kong consumer. The situation isn’t unusual, according to Mindshare’s latest research on mobile activity in the city. It’s closer to the norm.

The study, conducted in conjunction with Yahoo and TNS, took a granular look at mobile behaviour in Hong Kong and other Asia markets and found the former British colony is online more than any other market. New York may be the city that never sleeps, but Hong Kong is always on.

What that means for marketers, said Mindshare’s Deepika Nikhilender is to get “a big win, not only do brands need to do a better job integrating mobile into their overall plan, they need to expand the ways they use it.”

If your site isn’t mobile friendly, you’re missing a major influence opportunity. The most convincing web presence is moot if it won’t load well on a smartphone. And if you are ignoring social networks as a branding channel then you've left another chance to sway buying decisions on the table.

To demonstrate how vital mobile is in the city, Nikhilender explained that Mindshare's research shows Hong Kongers watch 140 minutes of TV per day on average. But they look at the small screen (smartphone, phablet or tablet) for 139 minutes. And a lot of that time overlaps. So add it all up and those little handheld screens actually carry more clout then the big one in the living room. If you are dividing your attention between them, then the more interactive one is likely to have more sway over you. Part of why mobile is so popular is because it is a more immersive and richer user experience.

Yet even though consumers give their devices so much scrutiny, marketers are still treating mobile as an ancillary, or worse entirely separate, strategy. Mindshare found brands only spend about 11 per cent of their digital budgets on mobile in Hong Kong, which suggests a significant mismatch between influencing power and tactical deployment. There’s a lot of opportunity left to explore.

Marketers mobile spending in Hong Kong is in line with the rest of the region and the world. Globally only about 13 per cent of the average digital budget goes to the segment.

“The situation is similar to when companies first started adding websites to their overall marketing strategy," Nikhilender said. "There wasn’t a lot of clarity on how to use it, and the full integration wasn’t there. Most are much better about it today but we’re seeing the dynamic repeat itself in mobile."

Another point she and Paul Gibbins, Mindshare Leader Hong Kong, emphasised is that saying ‘There’s an app for that’ is not a sufficient mobile strategy. Consumers in Hong Kong, but also across the region, use their phones, phablets and tablets in such an integrated way that parking your strategy in an app is just as likely to isolate you as boost exposure. “There are so many thousands of apps out there," Gibbons said. "Adding to that noise is not a best practice. It’s time to expand the way we use mobile as a marketing tool.”

Another dichotomy for marketers to contemplate in Hong Kong specifically is that the populace has a reputation for loving a bargain. Coupons or discount offers get a lot of tapping attention, with high clickthroughs but after questioning survey subjects, Mindshare found those offers came in low for creating positive brand impressions. Online content and games fared much better for influencing.

And that brings us back to the store. The feedback mobile users collect while they are standing right in front of a product and looking at their phone holds significant sway in the buying decision. They may not buy the item on their mobile (there are structural and cultural reasons for that) but they are quite likely to make up their mind about it. A sizable 85 per cent of Hong Kong subjects use their mobile for pre-purchase research. “That is the point where influence matters,” Nikhilender emphasised.

The trap marketers may fall into is believing that because 78 per cent of users still ultimately make purchases via a desktop computer, that means that the mobile piece is not significant. However, few would argue that TV is a poor marketing tool despite the fact that actual sales don’t come through it. The shift Mindshare’s research highlights is the scale of influence has begun to tip toward mobile devices. Prime time for tablet use, entertainment, communicating or planning, is the same time slot as for TV. And since you can chat, watch and game all at the same time on a tablet, switching between things instantly, there are many more ways for marketers to integrate into the content flow.

Mobile is turning out to be less of a singular channel or a segment, and more of an intrinsic dimension of modern life, especially in Hong Kong. Now there’s data that proves it. So how will you use it?

Mindshare dominates in new business, can step up in ...