Virgil Abloh, co-founder and CEO of streetwear label Off-White and menswear artistic director at Louis Vuitton, died on Sunday, according to a verified Instagram post. He was 41.

According to the post, Abloh passed after a two-year battle with a rare form of heart cancer called cardiac angiosarcoma. He is survived by his wife Shannon Abloh, children Lowe Abloh and Grey Abloh, his sister Edwina Abloh and his parents Nee and Eunice Abloh.

“He chose to endure his battle privately since his diagnosis in 2019, undergoing numerous challenging treatments, all while helming several significant institutions that span fashion, art, and culture,” the Instagram post read. “Through it all, his work ethic, infinite curiosity, and optimism never wavered.

“Virgil was driven by his dedication to his craft and to his mission to open doors for others and create pathways for greater equality in art and design. He often said, ‘Everything I do is for the 17-year-old version of myself,’ believing deeply in the power of art to inspire future generations,” the post continued.

Following the news, Abloh’s bespoke label Off-White dedicated its website homepage to the design and responded on social media. 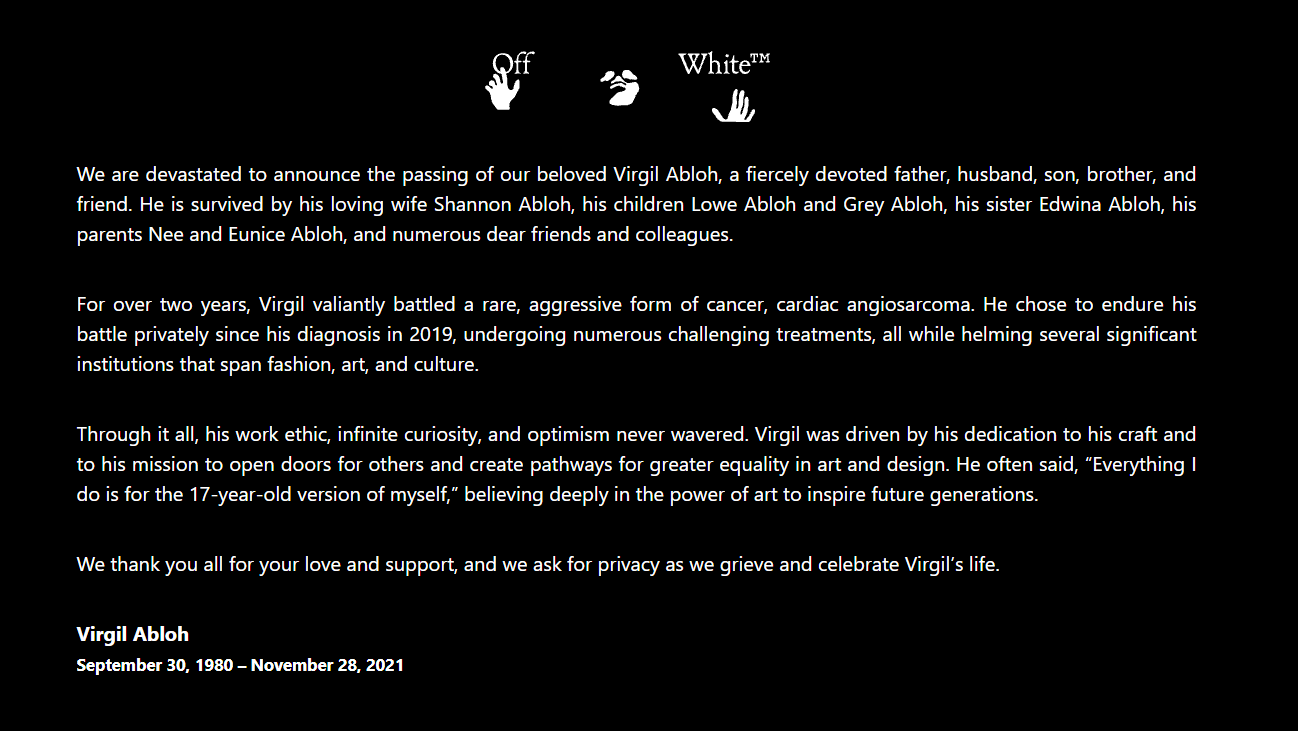 Louis Vuitton’s CEO, Bernard Arnault said in a statement: “We are all shocked by this terrible news. Virgil was not only a genius designer and a visionary, he was also a man with a beautiful soul and great wisdom. The LVMH family joins me in this moment of great sorrow and we are all thinking of his loved ones on the passing of their husband, father, brother, son and friend.”

LVMH, Louis Vuitton and Off White are devastated to announce the passing of Virgil Abloh, on Sunday, November 28th, of cancer, which he had been battling privately for several years. pic.twitter.com/9JkyCcBYXm

Making history as Louis Vuitton’s first Black artistic director in 2018, Abloh set new standards in art and fashion from the start of his career.

Starting in 2009 as an intern at Fendi in Rome, Abloh catapulted into the world of luxury alongside music and fashion artist Kanye West, who named him creative director of his creative agency, Donda, in 2010.

There he designed award-winning album covers and other work for West, including the cover for Grammy-award winning album “Watch the Throne,” which West created with rapper Jay-Z.

He then founded Pyrex Vision in 2011, a streetwear label that added a twist to high end fashion. It would later rebrand as Off-White, the bespoke streetwear brand that would shape Abloh’s legacy as a star fashion collaborator.

Among partnerships with brands such as Ikea, Jimmy Choo, Moncler, Warby Parker, Sunglass Hut, Converse and Dr. Martens, one of Abloh's most notable collaborations is his contribution to footwear through numerous releases with Nike.

Off White x Nike is credited with merging the worlds of streetwear and high fashion, a style Abloh carried with him as artistic director of menswear at Louis Vuitton.

At LVMH, Abloh is credited with challenging gender boundaries in men’s fashion and attracting a younger demographic through innovative collections that merged streetwear and high fashion. Celebrities that donned his designs include Chadwick Boseman, who also died of colon cancer in 2020, Michael B. Jordan and Hailey Bieber, who’s wedding dress was customized by Abloh.

Since the news, several celebrities have paid homage to Abloh on social media.