The ad-blocking debate has become increasingly ill-tempered in tone, exacerbated by companies like Three wading into the discussion. The mobile network, owned by Hutchison Whampoa, will soon allow its 80m customers to block ads at network level, via a partnership with start-up Shine.

The latter’s software can block 90% of ads, according to Three chief marketing officer Tom Malleschitz, as well as cookies, ad trackers and analytics. Shine is partly funded by Horizon Ventures, the investment fund of Li Ka-Shing – who also controls Hutchison Whampoa.

Malleschitz said the decision to offer ad-blocking came after the company identified ads as accounting for at least 20% of a user’s monthly data usage.

"The customer shouldn’t pay for ads," he says. "We don’t know how to pull this off, but it’s an ambition."

Industry insiders believe operators that lost out in the mobile ad gold rush are now looking to profit in some way.

Speaking at Mobile World Congress (MWC), M&C Saatchi Mobile chief executive James Hilton said: "Why are operators blocking ads? Are they consumer-centric, [is that] their full reason? One of the reasons is they are struggling to deal with the bandwidth. Ads take up huge amounts… operators pay the price. They will do anything they can to reduce bandwidth requirements."

Whatever its motivation, Three’s move will force the industry to hurry to a consensus as the issue becomes mainstream.

Prompted by Apple’s decision last year to allow ad-blocking extensions on Safari in iOS 9, the IAB announced new ‘LEAN’ principles that will set the standard for digital ads. LEAN, which stands for "Light, Encrypted, Ad choice supported and Non-invasive ads", marks the IAB’s cross-industry effort to bring ad-blocking to some kind of conclusion. 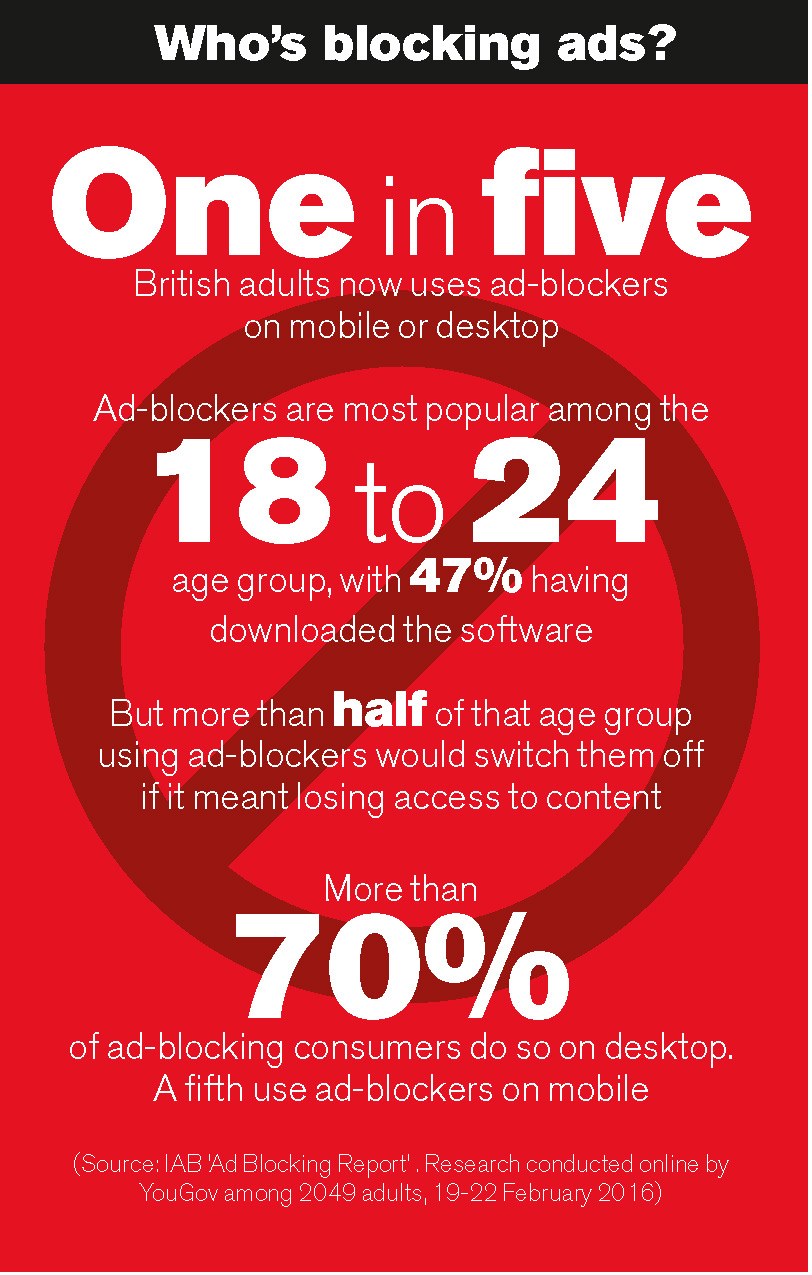 The initiative represents a mea culpa. Many in the industry – particularly marketers – realise that the blame for ad-blocking lies with the ecosystem rather than any one aspect of it. Ad tech has taken the brunt of the blame, but insiders note that it’s publishers who consent to intrusive units on their sites, and agencies and marketers who are responsible for bad creative.

As outgoing Post Office chief marketing officer Pete Markey said, when speaking at ISBA’s annual conference: "This is about evolution and the natural order of things shaking out. It’s a challenge and opportunity.

"For me as an advertiser, this is all about raising the bar. There’s been lots of sloppy advertising in the past, and very bad placement and creative that partly, but not completely, has led to this issue emerging. People are avoiding content that isn’t great and isn’t relevant to them. What that forces me to do as an advertiser is raise the bar."

Among the questions the industry has to resolve is who is responsible for bad ads – publisher, advertiser, ad network or some other player.

Google and Yahoo, both hugely reliant on ad revenue, recently played up their efforts in rooting out low-quality ads. In January, Google said it had eliminated 780m ‘bad ads’ in 2015, defined as those carrying malware, leading to phishing sites or promoting fake goods. It’s also hired more than 1000 people to aid the clean-up of desktop-browser and in-app advertising.

At MWC, Yahoo’s vice-president for EMEA, Nick Hugh, highlighted the company’s move away from display ads on mobile to native advertising, and said it encouraged consumers to flag up bad ads. "That’s the type of direct consumer relationship you have to have, and that’s how you drive consumer engagement," he said.

Hugh contended that blunt instruments like network-level ad-blockers threatened the free internet. "You’re blocking at a network level, but actually at a publisher or property level, some [ads] are very good. If you block everyone, you destroy the value exchange and ecosystem."

He added: "I don’t think we have loads of time to figure it out, because once a consumer starts blocking ads, they don’t uninstall [ad-blocking software]."

When the industry talks about solving ad-blocking, it also often talks about the need for "consumer education" – usually without consumers in the room.

This reflects a view that consumers don’t fully understand the ‘value exchange’ of the internet – free content in exchange for ads and attention.

But the data on ad-blocking suggests this is a myth. In its FAQs on ad-blocking, the IAB says it has found that most consumers wouldn’t voluntarily uninstall ad-blockers even in the full knowledge that advertising funds content.

This might be why The New York Times, among other major publications, has resorted to pop-ups asking ad-blocking readers to whitelist its site or else subscribe (which still exposes them to ads).

It has never been clear to the average consumer how or why a particular ad seems to follow them around the internet, why it is so difficult to find the button to close pop-ups (particularly on mobile screens), or what data is handed to advertisers and by whom. The digital ad market is so complicated, it’s little wonder so many consumers turn to blunt instruments.

Beyond better creative and greater relevance, then, it might be time for the industry to commit to making an improved user experience a priority.

As Nestlé’s global head of digital and social media, Pete Blackshaw, says: "There’s a huge amount of complexity out there. There are opportunities to think through how we communicate that value exchange.

"One thing we’ve attempted, with other big advertisers and retailers, is thinking about consumer-engagement principles – really stepping up the game in terms of how we communicate what we’re doing online. It’s thinking more critically about transparency."

This article was first published in Marketing's April 2016 issue

The first year of GDPR saw the carrot; next comes ...

Are your campaigns out of sync with consumers?