Luxury retailers are usually among the first to feel the pinch during periods of economic stress, like the prolonged Covid-19 outbreak. So little wonder then that the jewellery industry in China shrank by 4.7% compared to broader declines in household consumption.

But as the Chinese economy rebounds sharply, with the IMF predicting 8.1% growth in 2021, jewellery retailer Chow Tai Fook is looking ahead to wider growth across the country’s geographical regions.

In a presentation to Campaign’s Digital360 conference, Surrey Pau, deputy general manager of Chow Tai Fook Jewellery Group, responsible for market expansion, explained how and why the brand intends to seize opportunities in China’s fourth-and-fifth-tier cities, despite a natural bias in the sector towards selling luxury items to tier-one markets. 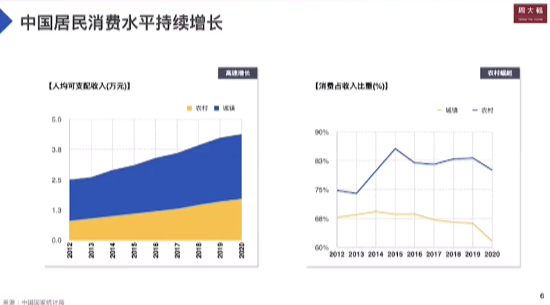 “Some people believe that in rural areas you don’t have much of an income, that you rely heavily on agriculture and have a very simple economic structure," Pau said. "However we believe that is just a myth."

Comparing household consumption and spending trends in rural and urban areas, Pau sees the countryside soon catching up with cities, helped by government support to rural areas. And along with higher incomes, the brand is seeing people shift to devoting more disposable spending to lifestyle improvements, including cosmetics and jewellery.

The other macrotrend is the massive rise in ecommerce spending. And thanks to recent infrastructure investments in new networks, the digital playing field has been levelled to a great degree in China, Pau argues.

“Even though you're in lower-tier cities, you have access to 5G networks, you can use smartphones and applications such as WeChat mini-programs," Pau contends. "So the online shopping experience is a universal regardless of where you are in China." So while Chow Tai Fook has some 4000 offline stores across China from top-tier to fifth-tier cities, a large part of its lower-tier expansion is being driven online, especially post-Covid. Much of Pau’s presentation was spent describing the jeweller’s various initiatives in connecting its offline and online sales across 80 different platforms and in tapping the consumption habits among its 3.85 million member accounts across China. These included:

Chow Tai Fook found that these technology tools are being utilised universally from all regions in China. And perhaps most interesting is what Pau sees in the data. Looking at customer preferences and employee feedback from the above tools, Pau concluded that “the consumers in rural and urban areas do not show any difference in terms of the selections of brands and products.” Both patterns and usage are much the same.

“We don't see any big difference. That’s our first-hand experience,” Pau said. Paired with expectations of higher growth rates in rural markets in the future, Pau said Chow Tai Fook is a brand unwilling to overlook the significant opportunies in smaller locales.