Sir Martin Sorrell should consider more radical ways to restructure and simplify WPP in response to slowing revenue growth and changing client needs, according to people inside and outside the company.

"The pressures that we’re seeing accelerate the need to simplify what we’ve got," the WPP chief executive admitted, after the company missed revenue targets at its half-year results on 23 August and the share price slumped by 11% in its biggest one-day fall since 1998.

As the world’s biggest ad group, WPP owns more than 160 companies. According to Brian Wieser, an analyst at Pivotal Research Group, "internal M&A" would be a logical way to simplify the group.

Several observers have said WPP could consider merging two or more of its four legacy creative agencies, Ogilvy, J Walter Thompson, Grey and Y&R (each of which has its own P&L), or reducing the agencies that WPP operates outside its top 12 countries globally.

However, a source close to WPP rejected the idea of merging creative agencies as it would destroy shareholder value and pointed out the group already has a simplified structure with WPP managers in more than 50 countries.

Sorrell, who has headed WPP since 1986, has blamed cuts by FMCG companies for the group’s 1.7% slump in net sales in the second quarter. He told investors his strategy of horizontality—getting agencies to "work seamlessly together" to help clients—was now a "critical priority" as FMCGs have made clear they want to use fewer agencies.

"Moving the company figuratively from a vertical to a horizontal structure is the thing we have to totally focus on," he said, stressing the importance of acting like "one company", rather than a collection of agencies.

Sorrell said: "I don’t think you can go in and declare one company overnight. That’s a mistake. To make an omelette, you have to break eggs and I think you risk breaking too many."

Earlier this year, WPP announced it would merge Maxus and MEC to form a new agency, Wavemaker, and it moved Possible and Salmon into Wunderman. The group has also promised to save £150m by merging IT and finance functions across the group’s agencies over three years. Scott Spirit, WPP’s chief digital officer, is said to be advising Sorrell. 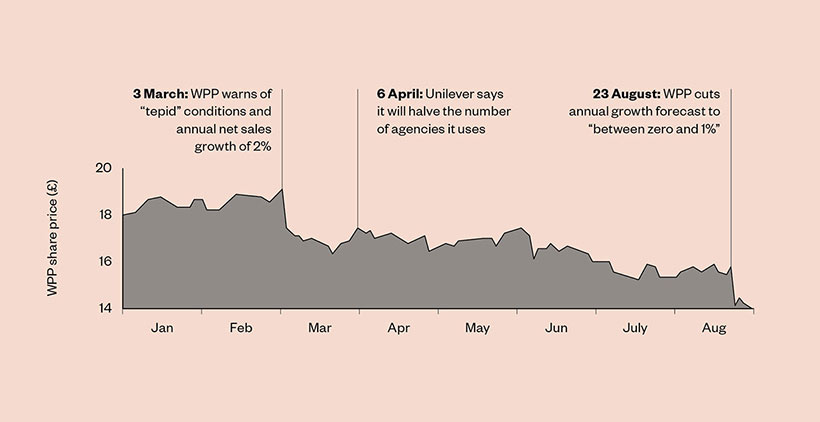 Privately, some WPP insiders have expressed frustration that Sorrell has not carried out a group-wide restructure or been more radical.

At the start of September, WPP’s top leaders met in Silicon Valley to discuss strategy. Speaking ahead of the meeting, one long-serving leader within WPP said: "Martin is more worried than he has been for a long time."

Investors were spooked in August when WPP cut its annual growth forecast to "between zero and 1%", even though Interpublic and Dentsu had already warned of cuts by FMCGs.

Paul Richards, an analyst at Numis Securities, said: "The genie is out of the bottle on structural pressures—with Google, Facebook and Amazon [bypassing agencies] and the rise of the management consultants. It is making people nervous about the agency sector."

Richards added WPP "has had a lot of success with horizontality", but noted it is also a "complicated" business that is "like a city" with 200,000 staff and many different divisions.

WPP has faced repeated questions in recent years about succession planning for Sorrell, 72, but analysts expect him to retain investors’ confidence. Wieser said: "So long as all agency holding companies are facing the same headwinds, no investor will assign WPP’s problems to current management."

WPP’s stock market value has dropped by about 25% to £18 billion in six months. Sorrell told Campaign in June that speculation that he might be interested in a merger or tie-up with Accenture was "rubbish". One ally said: "He doesn’t need to sell it. What he does care about is creating a legacy for WPP and restructuring it to recognise the new dynamics in the industry."