WPP’s biggest media agency topped the list in Recma’s New Biz Balance report after posting a balance of $1.49 billion, which was achieved after winning $2.76 billion in new business and losing $1.27 billion.

MediaCom’s biggest account wins last year were Mars ($1.8 billion), which was consolidated into one agency after buying was previously shared with Omnicom and Publicis Groupe, and Adidas ($300m).

Globally, MediaCom also retained the Shell business after a competitive pitch, along with Sky in the UK. The agency also retained $1.52 billion in accounts that went to pitch last year, but this number does not affect the Recma rankings.

Publicis Groupe’s Spark Foundry was a distant second in the agency league, with a $692 million net balance, while OMD was third with $508 million. 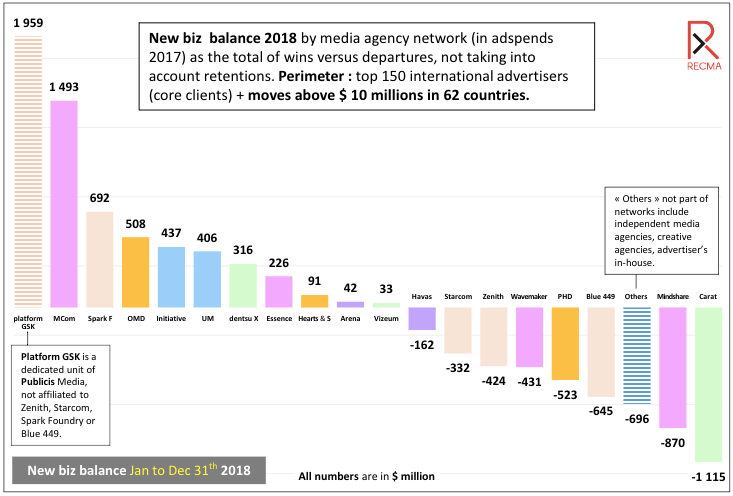 The worst performer in 2018 was Dentsu Aegis Network’s Carat, which registered a negative balance of $1.12 billion.

In contrast to 2017, when it was the best-performing network, Dentsu Aegis Network's new-business balance came in at -$820 million last year, with small positive balances for Dentsu X ($316 million) and Vizeum ($33m) dwarfed by Carat’s negative figure.

Publicis finished top of the networks with a balance of $1.25 billion, thanks to its dedicated unit for GlaxoSmithKline, Platform GSK, which brought in $2 billion in media billings alone. 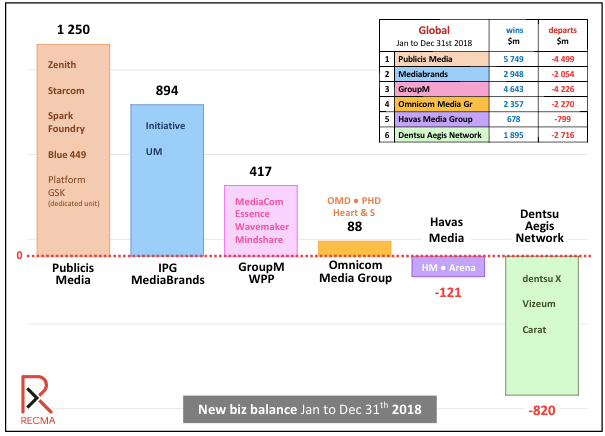 Without GSK, Publicis would have recorded a negative balance. Apart from Spark Foundry, all of Publicis’ media shops lost more in new-business billings than they gained, including Blue 499 (-$645 million), Zenith (-$424 million) and Starcom (-$332 million).