Muslims across Southeast Asia today are living vastly different lives than their parents did, driven mostly by a resurgence of faith and the spread of Western-style consumerism.

The New Muslim Consumer report by Wunderman Thompson Intelligence, in collaboration with VMLY&R Malaysia’s Muslim Intel Lab, looks into the lives and identities of the 250 million Muslims who live in Southeast Asia and highlights the changing traits of Muslim consumerism, why brands should take note, and the pitfalls to avoid.

The report, drawing on original survey data from 1,000 consumers in Indonesia and Malaysia, found that for a single generation, the idea of halal has gone from being mostly about food – namely avoiding pork and alcohol – to include travel, fashion, banking, education and more. In fact, halal was found to be the most important factor when it comes to buying products with Muslim consumers increasingly looking for a halal lifestyle. 91% said it is very important, ahead even of value for money (68%), high quality (61%) or being good for the planet (48%).

Consumers were surveyed for their views across a range of categories. Among them banking, for which 61% of respondents said having an Islamic banking or investment product is very important. On the travel front, while Muslim travellers are keen to explore new destinations, they want easy access to halal food, with 77% of respondents saying whether they can eat halal food factors ahead of cost (73%). The report also found that Muslims are using technology to further their halal lifestyle, including using mobile apps. Payment apps like GoPay, Ovo and ShopeePay are the most popular in Indonesia while ShopeePay, Touch ‘n Go and MAE (Maybank) are top in Malaysia – and there’s high interest in buy now, pay later options.

When asked about the new frontier of Web3 and the metaverse, the majority of Muslims are interested in the idea of Muslim spaces in the metaverse, but many also worry that the metaverse may be incompatible with Islamic lifestyle and teaching. 85% say they would like metaverse spaces made for Muslims. 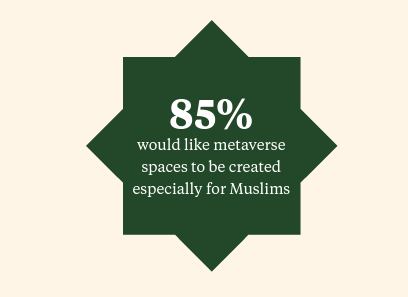 Men are still largely the decision makers when it comes to large purchases, while women have more say over daily purchases and holiday destinations. Females are breadwinners in only 42% of Muslim households.

Spirituality was found to be most important in life. 91% of respondents said having a strong relationship with Allah is very important, on par with health (91%) and followed closely by family (89%). A third of consumers said they are more observant than their parents were at their age; 45% said they are just as observant and just 21% said they are less observant.

“Muslim consumers are increasingly overlaying their religious beliefs on purchase decisions, and how they do so is constantly evolving. New technologies bring new questions – for example, is the metaverse halal?” says Chen May Yee, APAC director for Wunderman Thompson Intelligence. “Our report explores this and also notes that not everything needs a halal stamp. In fact, consumers recognise tokenism when they see it.”

Safa Arshadullah, writer and researcher at Wunderman Thompson Intelligence APAC says: “Southeast Asia is more than just a Muslim market—it’s a testing ground for the newest global trends. What happens here inspires Muslims around the world to consistently intertwine faith and function in innovative ways.”