The month-long fasting period of Ramadan—which kicks off this year on April 13—is a time where practising Muslims bask in devotion, reflection and restraint. But we live in a (mostly) capitalist world. So, of course, it’s also evolved into a period of mass consumerism and flashy marketing. In Muslim-majority markets such as Malaysia and Indonesia, adspend increases during the holy month, culminating with the grand celebration of Eid al-Fitr to mark the end of Ramadan.

A recent report by Virtue, the creative agency owned by Vice, highlights that Ramadan is also a month that cultural clichés come out of the woodwork. “Almost every ad features an overly glamorised picturesque family gathering around a table, ready for iftar or sahur. We’ve gotten used to seeing assiduous ‘housewives’ who fast with a big smile on their faces, preparing enough food to feed a battalion,” the report reads.

Ads often ignore the spiritual component of Ramadan and instead focus on fasting as an endurance or a “hunger competition”. The report added that these depictions are far from reality, and instead of adding to culture, they misconstrue it.

So how then can marketers be more conscious about subverting Ramadan tropes and positively contributing to culture? Strategy experts at Virtue and Vice speak about four facets of culture that can be shaped by Ramadan marketing.

During Ramadan, it’s not unusual for hotels and restaurants to display lavish piles of food across long buffet tables. Ads and TV shows, meanwhile, often portray families surrounded by dozens of dishes when breaking fast, establishing it as a ‘social norm’.

But iftar buffets and the imagery of extremely full tables come with a price. In Malaysia alone, over 4,000 tonnes of edible food is thrown away in landfills every day during Ramadan, and when accumulated over the course of a month, could feed up to 2.97 million people three times daily.

Adding to that, foods that are especially prepared and purchased during this month tend to be made up of meats such as beef, mutton and chicken, and enough scientific studies already show the adverse, long-term impact of excessive meat consumption to climate change. Lavish buffets such as these are common during Ramadan (Shutterstock)


Alvaro Bretel, head of strategy for the MEA region at Virtue, tells Campaign Asia-Pacific that he hasn’t yet come across Ramadan campaigns that call out food waste rather than promoting abundance, or those that offer suggestions on reducing waste during this period. Waste, he says, is not something that should only be addressed by FMCG or food brands but can be seen as a systemic issue for all to address.

“For example, ads in any category tend to portray tables with a lot of food. So, as a brand, you might be perpetuating this issue by [suggesting] that this is how your table should look like,” he says. “A lot of it has to do with the things that brands choose not to do or not to show.”

Food brands, on the other hand, can take a more proactive approach to perhaps come up with activations to educate people about food waste, or come up with recipes that make use of leftovers. Marketers can also provide tools for consumers to be able to share their food with others, especially with those who need it more—in itself tapping into the spirit of Ramadan.

Think of a Ramadan ad that features a feast, and chances are a woman is seen or implied to have laboured over a variety of dishes in the kitchen, only to have her family marvel at the sight before them. The report says: “This already existing cultural burden on women, which has seen a positive change in the past few years, is still perpetuated by entertainment and advertising”.

Saad Alabbassi, strategist at Vice, told Campaign Asia-Pacific that gender roles tend to favour conservativism, especially during Ramadan. The mother, wife or daughter is expected to shoulder all responsibilities when it comes to cooking for iftar, including cleaning up after a meal or going back into the kitchen to make dessert, relegating her to an “unending cycle of chores”. 
Marketers, he says, should be thinking about more progressive gender roles in their material instead of singling out women as sole contributors in the kitchen. “A lot of people are interested in cooking, and it could be portrayed as a family activity between all family members, even kids,” he says. “Ramadan is a time for reflection, spirituality and being with family, but in reality, women are just cooking endlessly for 30 days.”

On this note, Bretel adds that we need to start viewing advertising and marketing as an industry of culture that pushes and betters, rather than one that merely reflects real life. Marketers can start asking the question: Where do you see culture moving or evolving?

He says: “So instead of focusing on what the mainstream is doing, you focus on the edges of culture. So for instance, why is ‘togetherness’ during Ramadan only manifested on the dining table and not in the kitchen as well? Sure, brands might not have the omnipotent power to actually change culture, but it’s a grain of sand towards [the evolution of culture].”

With the pandemic having taken a toll on mental health, brands would do well to address societal expectations of “putting up a front” during festive periods, according to Alabbassi. “[So much of Ramadan marketing] is about the glitz and the glamour, the tents and the gatherings where you have to look your best and socialise with other people. It becomes an added layer, especially for those already dealing with mental difficulties,” he says.

For some Muslims, fasting, socialising, praying and reflecting become things they might feel obligated or pressured to perform seamlessly in a traditional familial setting, even if already dealing with mental struggles. And the visions of utopia and exaggerated happiness that marketers veer towards don’t do anything to alleviate these pressures. And of course, mental health can also intersect with factors such as gender and race—something that brands are not fully reflecting in their marketing. 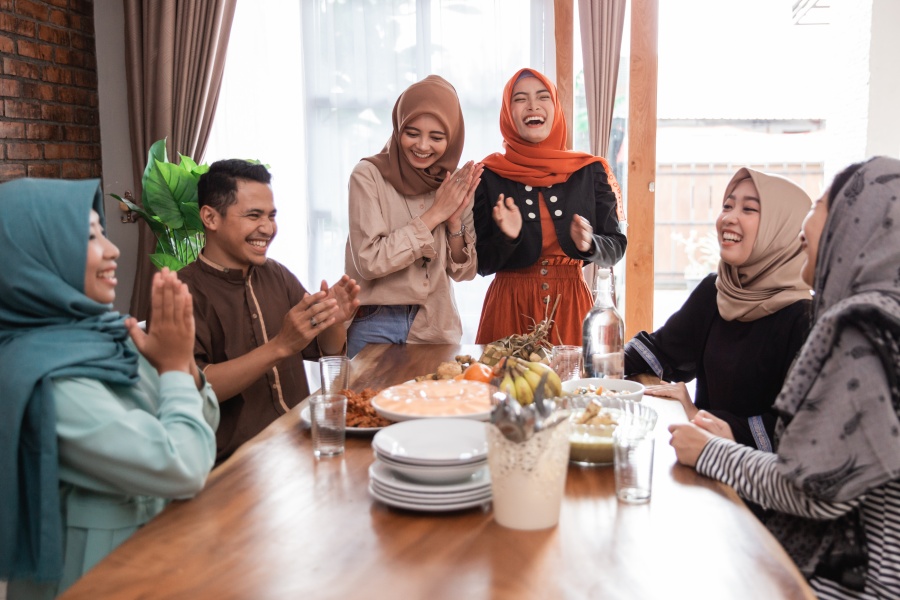 
Interestingly, mental health also ties nicely into Ramadan-related values of listening to each other, reflection, and spirituality. “Why are [marketers] neglecting the part that mental health fits perfectly [into Ramadan values]? Why are we still shying away from expressing that?” Alabbassi adds.

Bretel chips in: “Mental health is such a big issue, but we as people working in advertising tend to shy away from it because we feel it's too strong. But if you have the power and the audience and the reach, what can you lose from talking about it?”

It may be easier for marketers to see people solely as consumers, and negate the humanity behind the consumer. But Bretel argues that creative work can be much richer and more complex if consumers are viewed as layered and multi-faceted. In the context of Ramadan, this could mean brands having conversations about the social and moral issues Muslims may face such as the generational gap between young consumers and their parents; societal pressures as young Muslims; and questions on identity and belonging in particular markets.

According to research, Muslims are the world’s fastest-growing religious group. The number of Muslims globally is projected to grow more than twice as fast as the overall world population between 2015 and 2060 and, in the second half of this century, Muslims will likely surpass Christians as the world’s largest religious group.

Yet, brands tend to focus on Ramadan from a purely religious perspective rather than a cultural one. Virtue’s report emphasises that Ramadan values—such as humility, introspection and reflection—can be beneficial to everyone, observers and non-observes alike. Plus, focussing on Ramadan as a cultural event gives brands the opportunity to deliver their message to a broader audience.

“The key thing about Ramadan is that it’s not just about abstinence, fasting and food, it's way more than that,” says Alabbassi. “It’s a culturally impactful occasion more than just what is perceived by the media. There’s a gap where we can introduce [people] to the concept of Ramadan. What is the meaning of Ramadan? What values do Ramadan bring? What can we learn from Ramadan?” 
The sea of sameness in Ramadan marketing could also be down to brands thinking that they need to be present during the big calendar events of the year. Bretel says that if marketers stopped seeing Ramadan as merely a tactical period to advertise and look at it as an opportunity to build their brand and drive conversations, it could progress the quality of work.

“Going back to the issues that the industry has, advertising is taught to interrupt and fill spaces, rather than thinking about, ‘Hey, we can add value here and we can give people something that they will truly be interested in’,” says Bretel. “We're too focused on filling those spaces. So obviously, we’re going to keep on being a hated industry.”

During Ramadan and Eid, if marketers begin to perceive their brands as beyond serving business objectives, but also as cultural products, it will surely begin to move the needle and eventually provide consumers—Muslim and otherwise—the ads they deserve.