In 1973 Burton G. Malkiel launched his now infamous book, A Random Walk Down Wall Street, where he declared that a “blindfolded monkey throwing darts at a newspaper's financial pages could select a portfolio that would do just as well as one carefully selected by experts”. His approach went on to change how people managed their portfolio and challenged the idea that only the experts knew what worked.

Fast-forward to 2021 and Cannes Lions and what has that quote got to do with advertising? Well, having just put the winners from the Film category through the System1 Ad Test, they scored on average 2.1 stars out of 5. That makes them slightly less effective than the average TV ad. Ads selected by the world’s greatest advertising awards perform no better than a random selection of ads from the System1 database.

This isn’t a new trend. System1 started testing every Cannes winner for predicted effectiveness in 2019, exploring ordinary people’s emotional response to the work. We discovered a concerning trend – over the course of the 2010s, Lions winners performed less and less well with the public. As work by Peter Field that same year also found, effectiveness was falling.

A lot of this year’s winners aim higher and deeper – looking to provoke, to campaign, to drive social purpose, and to be something more than “just” an ad. Jurors love that – but audiences don’t always feel the same. It’s striking how often hard-hitting, creative, undeniably powerful work like Beats By Dre’s “You Love Me” or Essity’s “#wombstories” scores poorly with viewers both of which got a 1 Star rating. 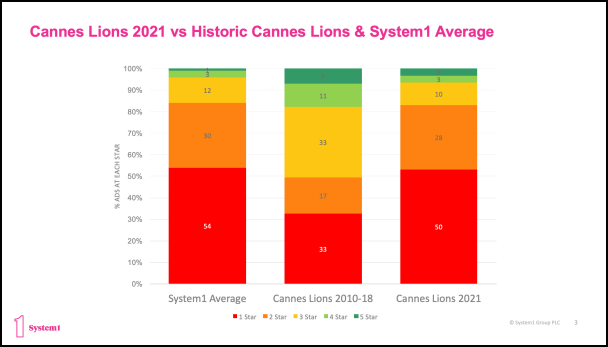 I think there are a couple of reasons why brands are looking beyond advertising.

First, the idea that this year is different. In a year where the news was dominated by Covid-19 worldwide, and the Black Lives Matter protests in the US and elsewhere, it might seem naive to expect ads to uplift, let alone entertain. A low-scoring Cannes winner like Facebook’s “Never Lost” addresses the pandemic head-on and tries to offer hope and connectivity among the confusion, but there’s unavoidable sadness and fear in there, too. However, what we have seen throughout last year is that people needed uplifting not reminding.

Second, the idea that part of a brand’s job now is to lead conversations on tough issues. For instance, “#wombstories” explicitly acknowledges that emotions around wombs, periods, pregnancy and fertility are extremely complicated, and stands for speaking out and telling stories, not just making people feel good. There could be different views between women and men because as we saw when we tested the Holland & Barrett's "Me. No. Pause." ad there was a significant uplift of 2 stars when tested among older women.

Good for society and good for business

However, perhaps we should remind ourselves that advertising exists to build brands and sell products – the reason we test ads in the first place is to predict how effective it will be at doing this. By our numbers, the ads the industry loves most aren’t doing this job well. But it doesn’t have to be that way as the recent Feeling Seen report by ITV, System1 and DECA proves. The report spotlights work that does well among the audience as a whole but even better among marginalised or minority groups featured in the ads.

An ad like IKEA’s “Hurray, For The Wonderful Everyday”, for instance, scored well with a general audience but got sky-high ratings from a black, British demographic sample, precisely because it celebrates joy and black family life and shows it as normal. There were so many more wonderful examples of effective advertising that represented minority groups. What these ads did was celebrate lives and culture and leave the audience feeling good.

Overall, from the sample of 30 ads, they scored 2.8 stars and amongst the represented groups this was boosted to 3.5 stars, proving that what is good for society is also good for business.

Another trend, perhaps exaggerated by the pandemic, is the sense that advertising now needs to move faster and concentrate on the short term. The System1 test includes a short-term effectiveness predictor (Spike) as well as the long-term Star Rating, and it’s true that some ads this year do really well in that area. The most controversial ad of the year, Burger King’s “Moldy Whopper”, predictably tanks on emotional response but performs outstandingly on short-term impact, and that’s probably just the way BK would want it.

The Lions that bite

So why aren’t juries picking effective ads for awards? As “Bob Ross” proves, they sometimes do. The Mountain Dew Ad, which scored 4.1 stars, was a brilliant example of an effective use of a brand's fluent devices, in this case the bright green bottle and mountain snow scene, combined with a simple story and uplifting music – all delivered in just 30 seconds compared to the typical three-minute film of many Cannes winners.

But they aren’t giving those ads the top awards. When we looked at the tests by type of award, we found that the Bronze winners scored 2.5 stars on average, and the work getting Silver or higher only got 1.7 stars. In other words, Cannes judges do sometimes recognise effective, well-liked ads – but feel, for whatever reason, that they don’t deserve the top-tier awards.

The Grand Prix winner, Nike, turns out to be a great example of this. “You Can’t Stop Us”, with its fantastic split-screen special effects, is actually one of the highest-scoring Grand Prix winners of recent years. But down in the Bronze tier is another Nike ad, “You Can’t Stop Sisters”, which tells the story of Venus and Serena Williams, and is the only ad in 2021 to get the maximum 5-star score from viewers.

They’re both excellent ads, but when you show them to people it’s the extraordinary human achievements of the Williams sisters that spark greater joy and awe than technical wizardry. The challenge for Cannes is to help juries see that.

There was one exception, however, and that was the Grand Prix for Strategy, which was won by Cheetos, scoring a very strong 4.8 stars and exceptional spike. This is a reminder of how it should be done and straight out of Orlando Wood’s Lemon. An ownable insight about the brand, a strong brand idea, a rare use of humour, and, of course, the perfect soundtrack. It really is a case of "you can’t touch this".

With so many ads making a loud noise this year, but lacking that all-important commercial bite, it’s good to see that there are still some strong examples.

So where next? The recent IPA Bellwether and AA/Warc Advertising Expenditure reports show advertising budgets are rising strongly and confidence is returning. This should be the moment to invest in longer-term thinking that delivers commercial results. As someone said to me recently: “Every ad brief comes with a side order of world peace.” So perhaps it’s time to add a side order of results alongside.

A note about methodology

System1 tested all 36 Cannes Lion Film winners across the UK and US and compared the scores to the Test Your Ad database of 50,000 ads and a previous study of 46 Cannes Lion winners conducted in 2019. Star Rating measures the emotional response to the ad and has been validated by the IPA to predict long-term market share gain. Spike Rating uses emotional intensity and speed of branding to measure the likelihood of short-term sales success.