It was a rare insight into the creative agency struggle. At WPP’s recent Capital Markets Day, the holding company showed the relative growth of its agencies.

Today, three of the four agencies (Grey, JWT and Y&R) have been merged with WPP’s more digitally focused shops, leaving Ogilvy, which already had broader capabilities like PR and CRM. 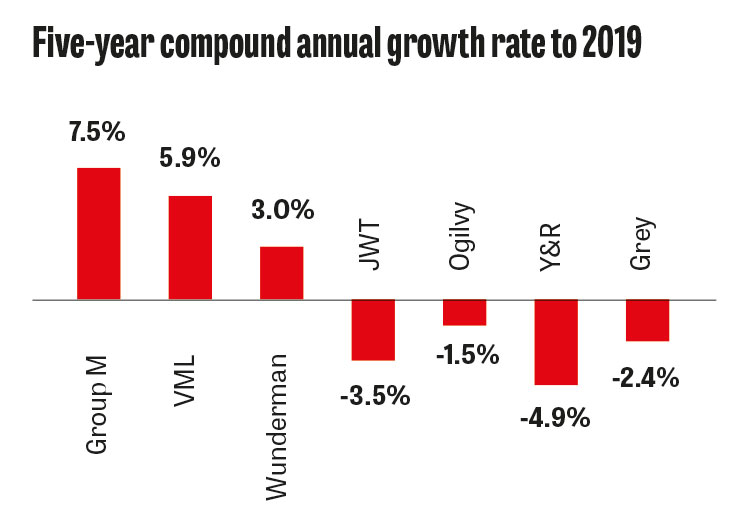 So why did the agencies perform so poorly? And does it show that the standalone creative agency is in terminal decline?

According to WPP chief executive Mark Read, creative agencies simply found it tougher to adapt to the digital landscape. While media agencies easily reallocated client budget into digital channels, clients were now asking for things creative agencies did not have the technical expertise to deliver, such as websites and CRM.

“You can only conclude that they didn’t reinvent their offer quickly enough,” Read says.

This is a concern for agencies across the industry facing the double hit of digital transformation, which is radically altering client requirements, and clients (and their strengthened procurement departments) asking for more work for less money. As Kingston Smith’s partner Esther Carder says, “Profitability hasn’t recovered since the 2008 crash. It hasn’t been an easy time for agencies to make money.”

Yet many agencies have succeeded, like Adam & Eve/DDB, which experienced rapid growth over the same period. “I don’t think it’s right to say creative agencies are in decline. Some of them are, some aren’t,” James Murphy, founder of NCA and A&E, says. “There isn’t a shortage of opportunities for creative agencies to grow. But there’s a shortage of the talent that can convert those opportunities into growth.”

Some argue that certain factors stifling growth are specific to holding companies. Mother’s global chief executive, Michael Wall, cites the large management tier and cost base that makes listed agencies less agile and adaptable. Quarterly reporting can also create short-termism as agencies aim for a centrally decided revenue target at all costs, which can lead to chasing business that is not very profitable or the right fit.

Independent agencies do appear to have performed better over a similar period. The 15 independents in Moore Kingston Smith’s annual survey of agency performance showed a collective compound annual growth rate of 6% from 2015-19 with a third showing individual decline. In comparison, this figure was just 1% for the 20 agencies owned by listed groups, with half showing a decline.

Read says the holding company structure is not the problem. If that were true, WPP’s media and digital agencies would also be doing badly. “It’s the way the businesses were set up and the expertise of the people,” he adds.

“Creative agencies are presenting a big old conundrum to the holding companies,” Larissa Vince, chief executive of Now, says. “They operate in a declining market, but are full of brilliant people with important client relationships. Can they merge their way to more positive numbers? Or would they be better to accept that creative agencies bring a different kind of benefit to the overall offering?”

Ownership aside, everyone agrees that growth is crucial to attract the right people, clients and revenue. The only way to do that, Read says, “is if they reinvent their offer with ideas at the heart”.

So what can creative agencies do to strike back?

WPP’s answer is to broaden its offer by combining companies. Since VMLY&R was created, it increased its quarterly like-for-like net sales growth from minus 10% to about 5% in Q1 2020. Although this is now in negative figures after Covid.

But this requires agencies to let go of their egos around the type of work they want to create. “For far too long, lots of creative agencies have applied their creativity to what they are interested in rather than what the client needs,” Magnus Djaba, global president of Saatchi & Saatchi, says. “This binary obsession with media channels is a noughties conversation. We apply just as much passion, chutzpah and belief into every single element of the funnel. When you do that, what I see is growth.”

Read agrees clients want creativity expressed “as an idea, not a 30-second ad”. The prize for those who break free from specific channels is “a golden age of creativity”, where “ideas can take many forms from the Fearless Girl [pictured above] to [Burger King’s] mouldy Whopper ad”.

Ultimately, the real test is whether creative agencies are producing high-quality work with significant impact for clients. “Our biggest value is the work. Get that right and you have the right to ask for a fair price,” Wall says.

As Djaba puts it: “Prove that creativity is the most powerful business tool, change things with creativity and do it first. If you keep doing that, you’ll be alright.”