First launched in 2021, the F-List from Clean Creatives and Australia-based climate advocacy group Comms Declare is a comprehensive list of agencies with fossil fuel clients on their books. The second edition of the annual list dropped today and it names 239 agencies, representing all the major eight holding companies, working alongside oil, gas and coal companies.

Following last year’s report, the F-List 2022 focuses on Latin America and the Asia-Pacific regions. It evaluates sustainability statements from agencies and compares them with the records of their clients. The report also reveals agencies actively under contract with the fossil fuel industry to aid them in covert attempts to greenwash.

In the investigation process, Clean Creatives found that most agencies had no references to fossil fuel clients on their front end—websites, banners, marketing materials among others. And despite the sustainability commitments and net-zero pledges most have made, the research teams used web archives to uncover links with Big Oil.

Talking about the rising extreme weather conditions around the world and the current destruction in Puerto Rico as hurricane Fiona rips through the country, Duncan Meisel, executive director at Clean Creatives, warns that the time for half-measure is over: “Advertising and PR companies have had decades of warnings that their relationships with fossil fuel companies are harming their reputation, and their clean clients. Until now, executives have chosen to ignore those warnings, with serious consequences for the planet, and their ability to attract and retain young talent.”

He adds: “Hundreds of agencies have pledged not to work with fossil fuels because working with polluters is bad for business, and bad for the planet.”

Within the ad industry, the movement to ditch Big Oil is growing. Mustache, a New York-based midsize agency owned by Cognizant, signed a pledge in 2021 to snap ties with any fossil fuel clients. The firm has publicly announced they will not be budged even if Shell comes up with a US$1 million contract.

Recently, France become the first European country to ban advertisements for fossil fuels. The ban implies that there will be no longer be any promotion of petroleum-based energy products, energy from the combustion of coal, and hydrogen-containing carbons in France. Elsewhere in Europe, Amsterdam has banned ads for fossil fuels, air travel, and foreign holidays. Pursuing similar strategies is the city of Sydney, Australia, they are the the first urban center in APAC to pledge a ban on all kinds of fossil fuel advertising.

To divert the attention of Climate Week attendees, Clean Creatives has installed posters around Manhattan that highlight the ties between major advertising and PR agencies and their fossil fuel clients. Key findings from this year’s F-List below: 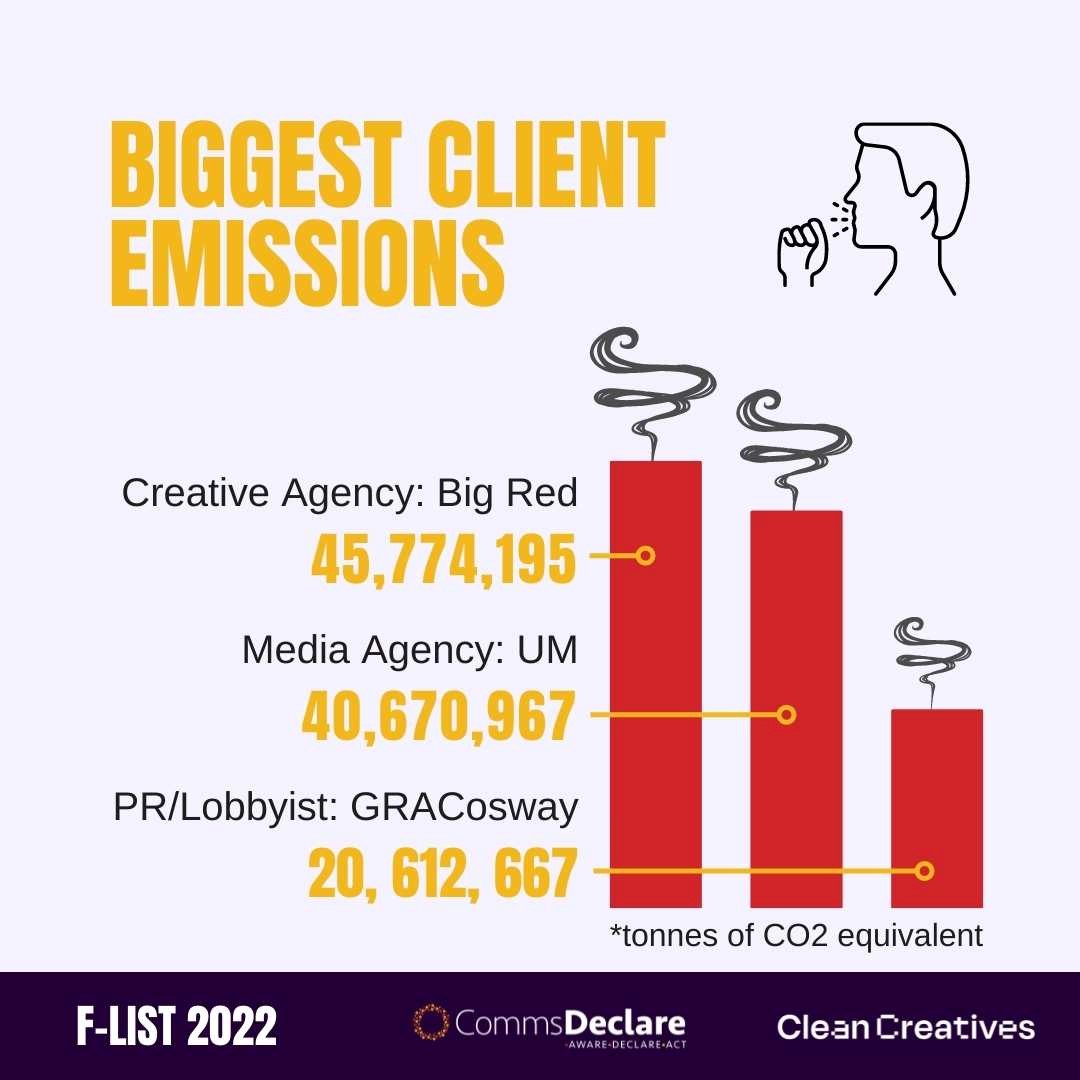 Coal giant Glencore has been called out for its PR blitz—their campaigns trumpet EVs, solar panels and wind turbines—with no mention of Glencore’s primary business: coal. Comms Declare says that Bastion Creative is behind the campaign. This complaint follows the barring of two employees of Anacta Strategies from lobbying the Queensland government. Glencore secured a lucrative bailout while employing Anacta.

Belinda Noble, founder of Comms Declare, says, “At least nine Australian advertising and PR agencies are helping coal giant Glencore portray itself as part of a clean energy future while the company is actually expanding coal operations. Agency executives need to wake up and realise they are actively helping the corporations creating global warming, which is generating unprecedented disasters around the globe.”