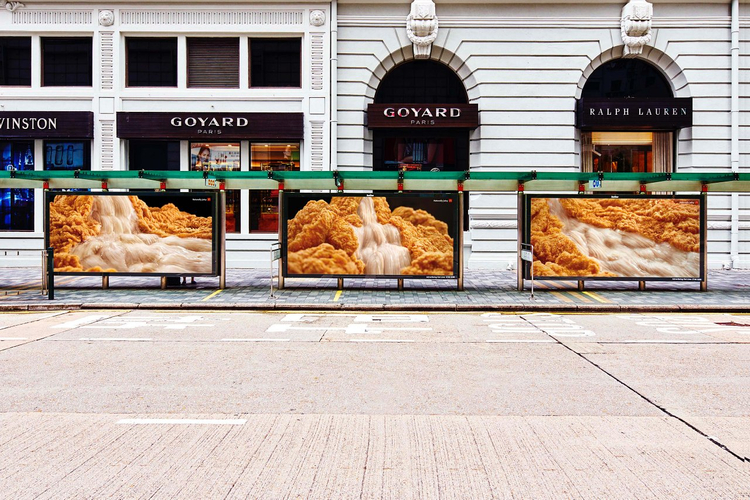 Today is International Fried Chicken Day. But of course you didn't need Ad Nut to tell you that. No doubt like most of the world's population you sprang out of bed very early this morning—well before the crowing of the first rooster—because you were eager to get started on a full day of fun activities pertaining to preparing and partaking in poultry parts.

The people of McDonald's are also eager to celebrate IFCD, even though this treasured holiday is more closely associated with KFC (which in fact claims to have invented it).

But we're talking about McDonald's, not KFC. Please don't get confused! Not even when you see the out-of-home ads above—the McDonald's out-of-home ads above—which may very well remind you of some rather famous KFC ads from the last couple of years. You know, the ones for which Ogilvy Hong Kong won awards at, like, all of the awards shows.

You see, those ads were about the crispy (and spicy) nature of fried chicken. And McDonald's, along with its agency DDB Group Hong Kong, has found that Hong Kong people care far more about the juiciness of fried chicken than they do about its crispiness. In fact, 71% of 226 respondents to a June survey rated juiciness as the most important and appealing fried-chicken attribute, according to DDB.

Thus this IFCD campaign, which plays up the moistness aspect in print and outdoor ads (above) and social media stuff (below). The agency optimistically asserts that Hong Kongers will henceforth refer to this day as “International Juicy Chicken Day”.

Ad Nut submits that despite the best efforts of both McDonald's and KFC, people will continue to refer to this day as "July 6". But at the same time, Ad Nut can't begrudge McDonald's for trying to get some notice on a day its rival 'owns'. Nor can Ad Nut blame DDB for choosing to play off of Ogilvy's famous ads in doing so. It's all in good fun, and Ad Nut wholeheartedly supports agencies clapping back at each other through their work.

Mind you, neither the agency nor the brand has admitted that this is what they're up to. The press materials don't mention KFC at all, of course, and DDB hasn't yet responded to a direct request to confirm, deny, or decline to comment about whether the similarity is purposeful.*

But of course it is.

Which brings us to the actual work. To be diplomatic about it, Ad Nut finds the images more disturbing than appetising. As one who consumes mainly nuts and seeds, Ad Nut may not be the best judge. But Ad Nut's more carnivorous colleagues at Campaign Asia-Pacific agreed they found the pictures a bit offputting. One even said these "waterfalls of white meat" might "haunt me in my sleep".

But what do they know? The brand says its HK outlets sell 60 million McWings a year and adds that it moved 10 million units of a bone-in-chicken product in the first four months since it launched late last year. Those are some juicy numbers.

*Update: As expected, the agency has now declined to comment.