whatsapp 0 whatsapp 0 Facebook 0 Tweet 0 linkedin 0
On 11 November, Maruti Suzuki created a lot of buzz on social media for an eight-page print ad in The Times of India. At a time when print has been written off by many, Maruti Suzuki proved with this ad, that innovations on the medium still work. 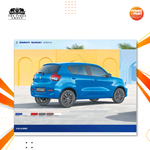 Audi Q2 takes users on a drive through Instagram filter