When we published the last FutureBrand Index in 2018, we were looking at how brands were faring a decade after the worst financial crisis in living memory. This week, we launched the 2020 index in the midst of the worst health crisis in a century.

The index takes PwC's list of the Global Top 100 Companies by market capitalisation, and re-orders them based on brand perception strength. With all the research undertaken during lockdown, it tells us how the perception of major brands has been shifting since the outbreak of the pandemic and we see three mega-trends that look set to determine which companies thrive, post-Covid.

1. The rise of companies making themselves fundamental to life in the future

The companies that have shone in this year’s FutureBrand Index are the ones building the platforms and infrastructures that anticipate human behaviour in the future. Companies such as Tesla and Apple are being joined by the likes of energy company Nextera and ASML, which supplies parts to the semiconductor industry, in setting new standards in their respective sectors. 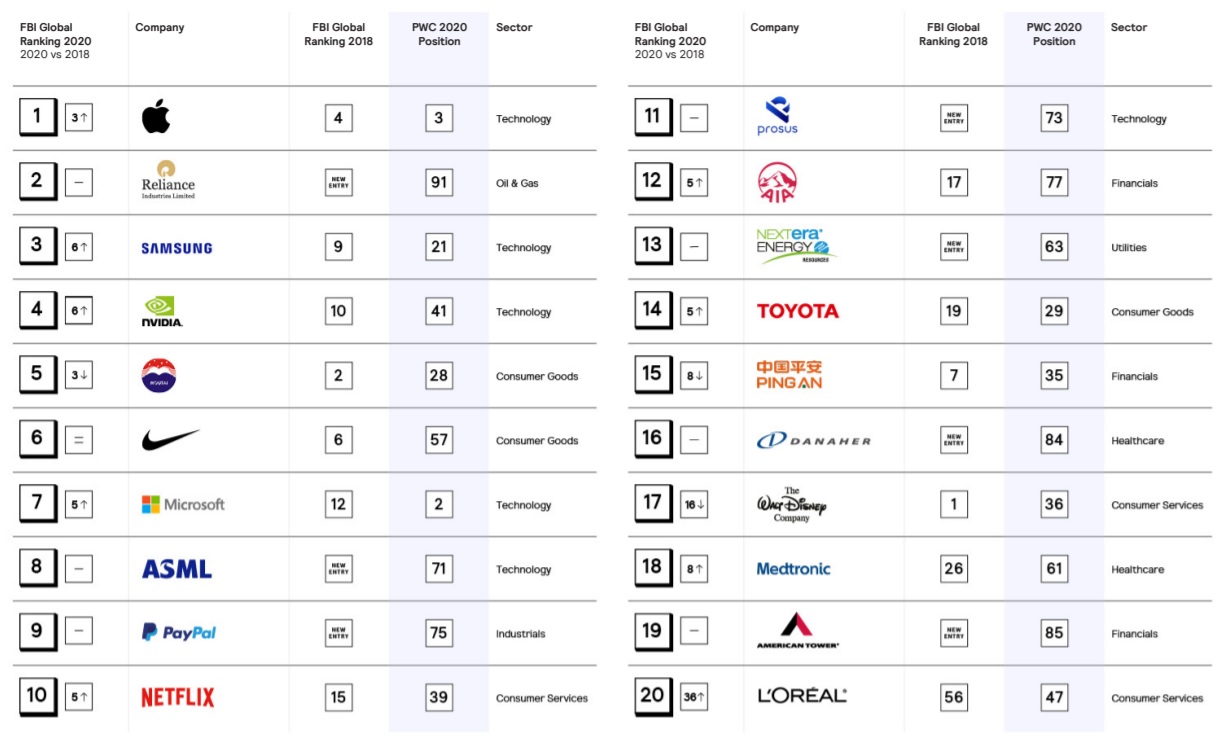 Netflix has risen to number 10 in the Index, eclipsing the mighty Walt Disney Company, which has fallen from the top spot to number 17. What makes Netflix the leading entertainment brand in the world is how it has successfully anticipated what people will want, how they will want it and, importantly, delivering it when demand has been at its highest.

Similarly, PayPal is a rising star because it has quietly been shaping the way we pay for things to the point where responders in our research regard it as not just reliable and trustworthy but playing a vital role in their daily lives. The pandemic just accelerated this.

2. The rise of companies that connect purpose and profit

Where once brand purpose was about doing something good to offset the bad—often eroding profit in the process—we've seen it unashamedly become a real driver of profit through aligned experiences for our top performing brands. 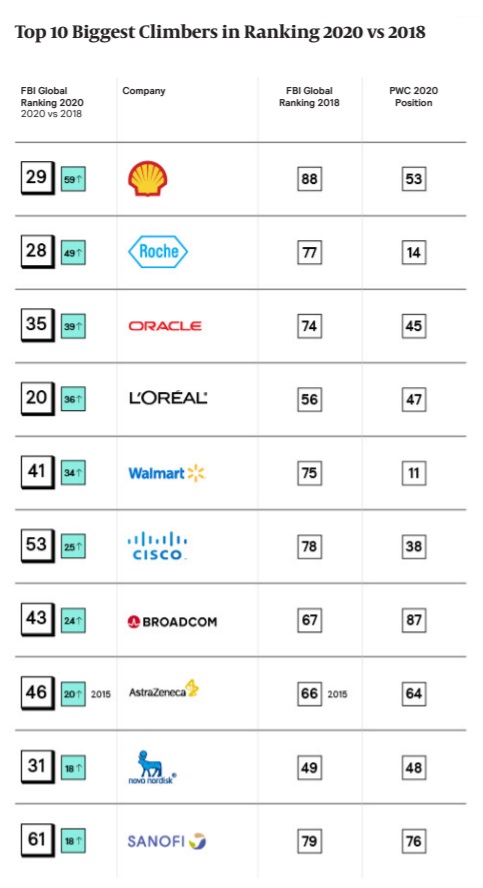 US retail giant Walmart, climbing 34 places in the rankings, had a fast, proactive response to the pandemic that seamlessly brought together purpose, experience and profit. It implemented an emergency-leave programme, provided additional time off for employees, paid nearly $180 million in cash bonuses to staff and hired 200,000 more employees. This was not only the right thing to do for staff, it also ensured they could deliver the best possible service experience to shoppers fearing the worst.

L’Oréal, another major success story in this year’s index, took an alternative approach that showed the brand’s human side while still shifting product. By pivoting to make hand sanitiser it invested in future profits via goodwill, while at the same time, underlining its everyday indispensability and availability for people stuck in lockdown via Eva Longoria dyeing her own hair at home.

3. The rise of individualism as the ultimate mark of a leader

Another interesting theme to emerge from the index is a new requirement for leaders not only to do the right thing but also to do so in their own, unique way.

We saw that a common trait uniting the big winners was their ability to express an individual take on the world that distinguishes them from competitors. Whether acting unconventionally in order to do the right thing or forging entirely different paths from rivals to shore up success, this demands a specific type of leader.

Elon Musk has a unique way of doing things but then so, too, does Satya Nadella at Microsoft (number 7) who is known for his positive, open and empathetic leadership style, which has been cited as a major reason for the brand’s successful transformation.

Meanwhile, Maria Eitel, president and chief executive of the Nike Foundation, is another pioneering leader whose personal commitment to equality has likely contributed to Nike staying high in the index this year, at number 6.

For creative industry businesses, these shifts represent a chance to increase our influence on how companies and brands behave, inside and out, not just what they say or how they look. The better able we are to align brand and experience and creativity with commerce, then the more resilient we will make our industry as well as those of our clients.

Consumers ready for ‘Made in China’: FutureBrand