Who doesn't love a good funnel?

Today, we're going to make a nice colorful funnel using the latest data from some of the ad industry's most reliable sources to trace a dollar spent for programmatically-bought display advertising on its exciting journey from your pocket to the bank accounts of middlemen, con men, crooks, and the Bermuda Triangle.

Adtech was created to make the buying and selling of online advertising so much more efficient. Today, about $350 billion dollars is spent on online advertising. 70%+ of it is bought programmatically. It turns out it has been wonderfully efficient for the lads and lassies in the adtech industry. Not so efficient for losers like you and me. Let's see how it's working... 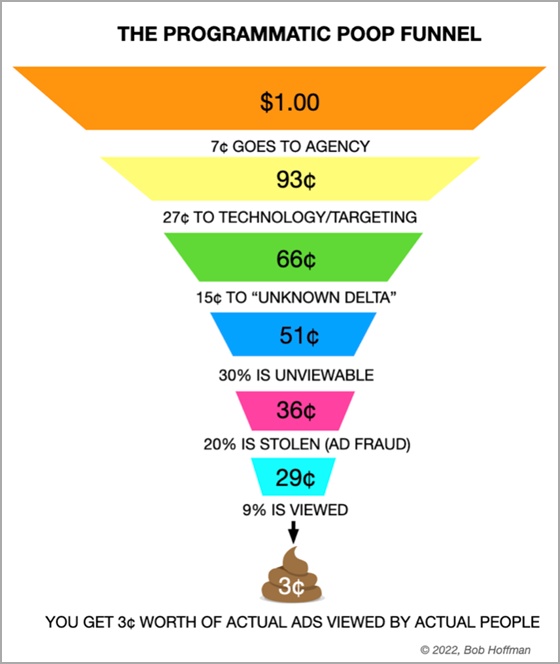 As the above graphic shows...

As I'm sure you know, no one in the comical online "metrics" business can agree on anything. Consequently, to minimize the torrent of abuse I'm going to get from agency and adtech apologists, I have taken the numbers in the above illustration from the most reliable sources I could find:

Oh, and be sure to ask your agency about these numbers. And when they say, "We have systems in place..." ask to see the systems, have them explained to you, and get their version of how much value you're getting from a programmatic ad dollar. Should be good for a few laughs.

Some notes on the funnel

It's important to note that the ISBA study alluded to in points 1 through 4 above only reported on the highest quality tip of the iceberg—the most premium end of the programmatic marketplace.

Even at the premium end, only 12% of the ad dollars were completely transparent and traceable. An astounding 88% of dollars could not be traced from end to end. Imagine what the numbers must be like in the non-premium end.