Skittles is six years into its tradition of renouncing its signature rainbow packaging in celebration of Pride month, and now it has applied those bright colours to a new campaign to bring to life a striking selection of historic LGBTQIA+ archive images.

As part of the 'Recolour the rainbow' campaign, Skittles has joined forces with leading players in the LGBTQIA+ space—Switchboard, Queer Britain and Gay Times—to restore four images to full colour for the first time, bringing a new visibility to each one.

The campaign was created by Nick Howard, Nick Stone, Clarissa Dale and John Trainor-Tobin at Adam & Eve/DDB, with media handled by MediaCom. Colourists Dynamichrome worked with the groups to repurpose the images, which comprise a 1971 Gay Liberation Front protest in Trafalgar Square, a Lesbian Strength March in 1985, including prominent activist Femi Otitoju, and photos capturing Pride events held in New York City and San Francisco in the 1970s. 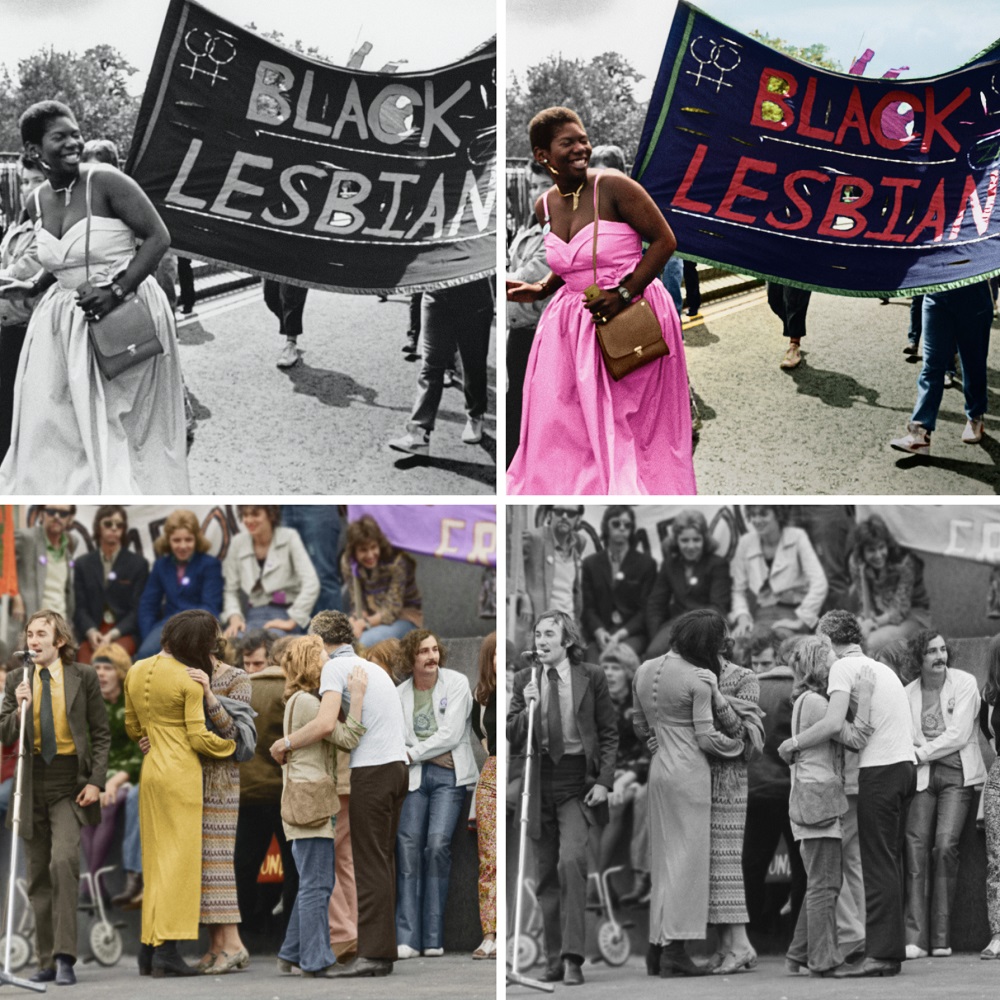 Victoria Gell, brand director at Skittles, told Campaign: “The creative idea behind this campaign is very much rooted in the fact that throughout history, the experiences of the LGBTQIA+ community have often been erased or overlooked or marginalised, and that had resulted in a global lack of historic content. However, there is really a rich content out there that exists, it’s just that sometimes it's difficult to find.

"We thought it was important to take a moment to reflect on the past in order to go forward into a better future. And that's how we came up with the idea of recolouring the rainbow—by using our rainbow to recolour iconic images, while also featuring a call to action for people to step forward and submit their [own] images.”

A submission portal has been created by Gay Times Group, which will sit alongside a dedicated campaign hub on the site. This includes an intergenerational video series, featuring individuals from the images, such as Otitoju, in conversation with younger people from the LGBTQIA+ community. The hub will also feature a series of behind-the-photo editorials to bring to life the stories surrounding each image, along with a zine and sticker sheet to celebrate Switchboard’s history, which will also be donated to Queer Britain.

The project is expected to stretch beyond June well into the summer as more people come forward with submissions.

In 2016, Skittles declared in an open letter that it would “give the rainbow” to the LGBTQIA+ community in recognition of Pride month. The rainbow, a recognisable symbol of Pride, also has a link to the brand. As such, every year since, Skittles has given up its rainbow colours to allow Pride’s rainbow to take centre stage.

Alongside this, geo-targeted Skittles Snapchat filters will be live in both London and Manchester over the Pride parade dates.

Pride month: How to gain the respect of the rainbow ...