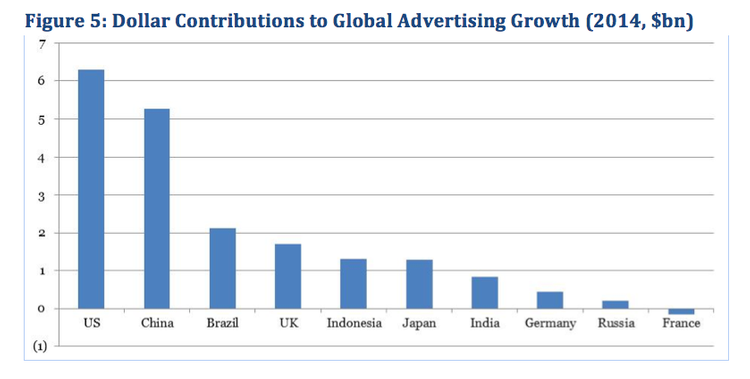 Magna Global’s latest study estimates ad revenue grew 5.5 per cent this year to reach the half-trillion mark ($512 billion) and expects it to grow 4.8 per cent to reach $536 billion in 2015. The more generous ZenithOptimedia said ad spend would grow 4.9 per cent to touch $545 billion next year.

Campaign Asia-Pacific breaks down the details:

Softening economic prospects are expected to impact the industry, causing advertising revenues to increase 6.9 per cent, lower than last year’s 7.1 per cent growth.

China’s growth forecasts continue to move lower. Chinese ad spend growth will slow from 11.6 per cent this year to 8.6 per cent in 2015 due to weakness in housing sales, property development and manufacturing activity.

In Japan, the shock created by the sales tax increase this year has hit economic activity, but this is more or less offset by a new inflationary economic environment driving up media costs. This will see ad spend increase by 3 per cent this year and 2.7 per cent next year.

India remains the bright spot in an otherwise declining advertising market. It showed strong growth (13.2 per cent) following two lackluster years. The general elections that took place in the first half of the year generated massive spend, benefiting television. The new BJP-led government, prompted Magna Global to raise its growth forecast to 13.3 per cent.

Still, the strongest growth in APAC came from Indonesia (up 21.5 per cent) and Thailand showed the weakest performance as ad spend declined 2.3 per cent, weighed down by political and economic issues.

Digital remains the largest growth driver in APAC, and increased by 22.7 per cent this year to represent over one quarter of total advertising spend for the first time.

Television remains the dominant format for advertising spend in APAC, and spend will grow by 3.5 per cent this year, representing slightly over 40 per cent of all advertising dollars.

Print continues to lose market share, and newspaper and magazines together will represent less than one in five advertising dollars this year. This is down from one third of all spending as recently as 2008.

Australia, New Zealand, Hong Kong, Singapore and South Korea grew at a disappointing rate (2.4 per cent) in 2014, following weakness in the property market, which damaged consumer confidence in Singapore. However, as Singapore recovers the company expects growth to pick up to an average of 5.1 per cent a year through to 2017.

In contrast, the rapidly growing economies of China, India, Malaysia, Pakistan, Philippines, Taiwan, Thailand and Vietnam will end the year up 10.1 per cent. ZenithOptimedia forecasts growth between 10 and 11 per cent in 2015.

China overtook Japan to become the world’s second-largest ad market in 2014. ZenithOptimedia predicts a few more changes at the top over the next three years. In 2016, it expects UK to overtake Germany to take fourth place, and South Korea to leapfrog over Australia and France to take seventh place.

Despite recent measures of economic stimulus Japan remains stuck in its rut of persistent low growth and as such growth in 2014 stood at 2.8 per cent and will continue to hover at 2 per cent between 2014 and 2017.