Coca-Cola has enlisted spoken-word artist George the Poet for a UK campaign marking the cultural significance of the coronavirus pandemic, after the brand paused marketing spend in April as lockdown measures were enforced around the world.

Created by 72andSunny Amsterdam, “Open like never before” stars George the Poet as he performs a piece calling on the public to look at the world in a different light.

The film beings by showing a series of key workers such as a supermarket employee and a teacher. It then moves on to other people who are enjoying different activities and relishing time with their loved ones.

“In February, we announced that to bring our purpose to life we would focus on empathy – the ability to walk in someone else’s shoes and understand other people’s feelings – and that empathy was the focus of the brand moving forward,” Walter Susini, senior vice-president of marketing, EMEA, at Coca-Cola, said.

“When we all went into lockdown, it was clear at least to us that we needed to respond, and empathy was the lighthouse that guided our actions.

“We decided that as a company it was important for us to come off air and redirect our resources instead to our most critical priorities: doing everything possible to ensure our employees’ safety and well-being, as well as focus our efforts on how we could make tangible difference for our partners, for the people and for the communities out there."

During the months in which Coca-Cola paused its marketing spend, Susini noted that the brand donated $120m (£92m) to organisations to support relief efforts.

One such initiative saw Coca-Cola provide nearly two million healthy meals and more than one million drinks to people in need across the UK via FareShare.

In the next few months, Susini said that the “core of what Coca-Cola will be doing” will entail utilising George the Poet’s work for outdoor activity. People will be able to scan the ad using their smartphone to listen to the full poem.

Other outdoor work will reference the poem’s manifesto, with posters showing copy including “I’ll never call my job unimportant again” and “I’ll keep social distance from bad energy”. Media planning and buying was handled by MediaCom. 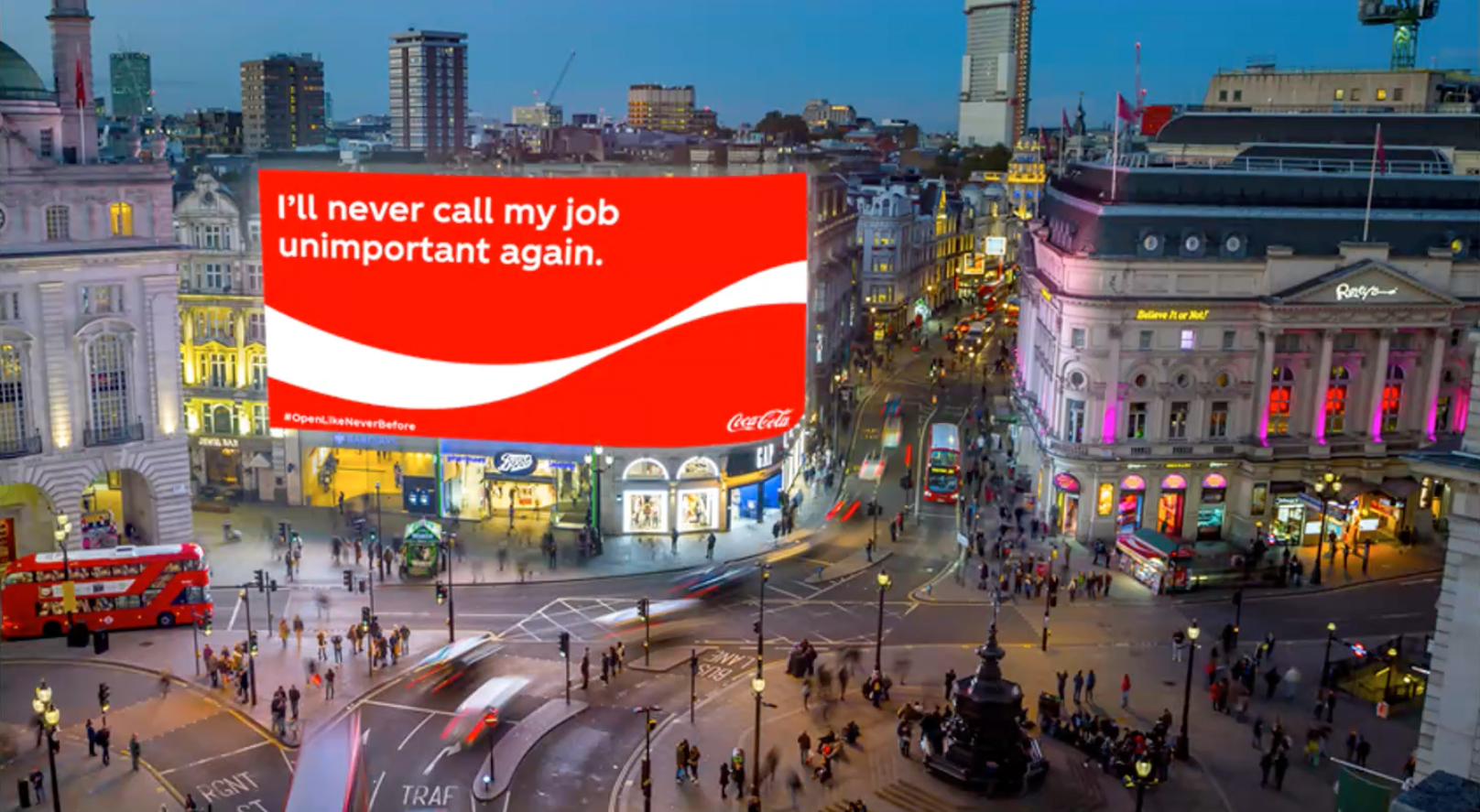 Coca-Cola is also launching a hospitality venue support programme in August that will provide a media budget and advertising space to pubs, bars and restaurants to enable them to create their own ads, which they can then use on social media to promote their business.

So far, 2020 has seen brands including BT, Gumtree and Ovo use spoken-word poetry in their work.

George the Poet previously featured in ads for O2 and Nike, as well as a spot to promote his BBC podcast, “Have you heard George’s podcast?”.

Discussing his role in the campaign, George the Poet said: “The underlying message of this campaign is close to my heart.

“Covid gave me a moment to reflect at a time when the world came to a standstill, made me more patient and adapt to different ways of working. Going forward, I’m going to do what I can to seize the moment and be open to change like never before.

“As long as there are human beings capable of empathy and hope, the world will get better.”

Coca-Cola’s first work since the pause, “The great meal”, demonstrated the role of family cooking during the pandemic.

Coca-Cola is 'exiting some zombie brands'

Shipping service Sendle pays tribute to those with ...