Most of the “big six” groups—WPP, Publicis Groupe, Omnicom, Interpublic, Dentsu and Havas—had expected it would take two years or longer for revenue to return to pre-pandemic levels.

Publicis Groupe, the second largest by headcount, expanded by 7,950 employees to reach around 87,000, according to the company, which has not published its annual report with an exact figure yet. The French group cut 4,184 roles in 2020. 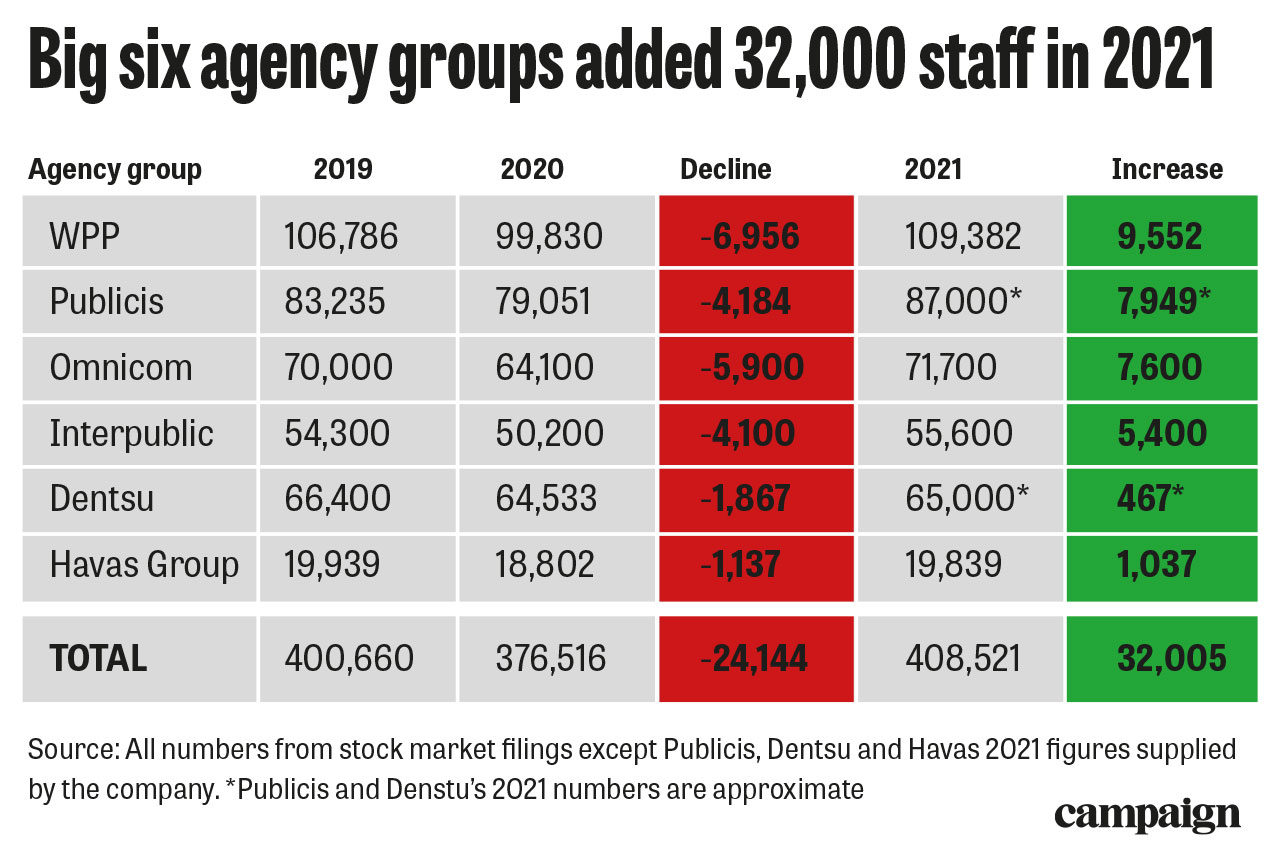 The increases in staff numbers do not fully reflect some of the levels of employee churn in 2021 as the jobs market sprang back to life across much of the economy—a trend dubbed “The Great Resignation”. Dentsu said 17,000 new employees, or more than a quarter of its workforce, joined last year.

Ian Whittaker, a long-time advertising analyst and the founder and managing director of Liberty Sky Advisors, who writes Campaign’s Investor View column, said: “The agency groups bounced back much stronger from the pandemic than the consensus expected. Issues remain in areas such as pricing but the pandemic might turn out to have been a blessing in disguise in that it proved the worth of the agencies to clients.

“There are short-term pressures in recruitment and compensation but a longer-term question for the groups is whether they need to redesign the ‘sack-start’ policy of firing people in a cyclical fall only to rehire them expensively later. That may avoid many staffing problems.”

Agency leaders have previously defended their decision to cut so many jobs—particularly during Q2 2020 when the ad market collapsed—and then to hire again a year later.

Mark Read, the chief executive of WPP, told Campaign at its 2021 annual results in February that the company “took a lot of steps to limit the number of people that we did cut” by asking staff to make voluntary salary sacrifices and not cutting jobs in line with the scale of the revenue decline.

Some of the jobs growth in 2021 has been in “new areas” that are different from the areas where there were redundancies, Read added.

Similarly, Philippe Krakowsky, the chief executive of Interpublic, insisted to Campaign last year that it had tried to protect jobs in a “strategic” way during the coronavirus downturn.

IPG and the wider sector is “in the process of evolving” and the roles that were lost were not replaced in a “like for like” way when IPG began hiring again, Krakowsky said, explaining there had been “a shift in the skillsets and in the talent” that clients needed.

The big agency groups reported organic revenue growth of 10% or higher at their 2021 results and predicted further increases of between 4% and 6% in 2022—but that was before the Russian invasion of Ukraine, which has hit global investor sentiment.

Why you should hire for speeds, not just skills

Talent jumping ship from agency to brand is not ...