Campaigns that ran on Facebook and Instagram had a mostly positive effect on consumer attitudes towards the brand, proved an exhaustive study by Kantar Millward Brown and Saïd Business School, University of Oxford.

"Most campaigns that ran on Facebook and Instagram had a positive outcome on brand saliency, associations and motivations for consumers," professor Andrew Stephen, associate dean of research and L’Oréal professor of marketing at the Saïd Business School, University of Oxford, said.

Some brands even had a negative impact, but next to none had zero effect on consumer perceptions of the brand and their consideration of its products.

And there was a considerable difference of up to than 35 percentage points between the most and least effective campaigns, indicating that the content and style of the ad made a difference.

In trying to explain the difference between the most and least effective campaigns on social, Stephen and his team eliminated the format type, number of ad units, number of creative types, industry, geography and Facebook vs Facebook and Instagram.

"None of these variables significantly explained the differences we were seeing in campaign effectiveness, so we decided to examine a hypothesis that it was the brand's behaviour that made a difference," Stephen said.

To test if it was indeed the brand's behaviour that made the difference, the team used machine learning to classify brands as "more or less human".

"We did natural language processing on texts from the brands' owned media on Facebook, and classified each brand as to whether they were more personable, emotional and/or functional," Stephen explained.

The study found that brands that were more personable, emotional and less functional – and so, more human – had a strong positive effect on brand awareness.

However there was next to no correlation between brands that are more human and brand association or motivation (such as intent to buy) on the consumer.

"But I'd argue that these factors are indirectly impacted," Stephen said.

Digital advertising, in general, has an impact too

Stephen and his team also analysed the effectiveness of digital advertising on brand metrics across desktop and mobile.

To do so, they analysed Kantar's database of 8,811 campaigns that have been run around the world over the past seven years in terms of brand lift effectiveness.

"We found that desktop has a constant 2-4% impact on effectiveness. Mobile, on the other hand really spiked in the earlier days but with the maturity of the medium, it's now basically the same level as desktop," Stephen said (chart below). 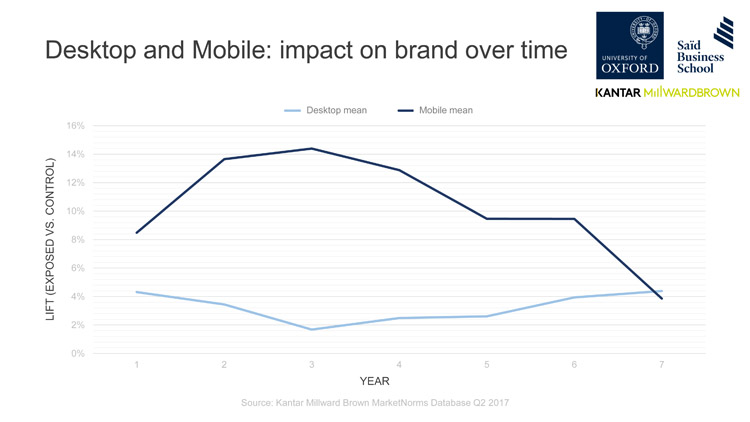 In general, new formats outperform more traditional formats initially but then they drop off, Jane Ostler, managing director of media and digital at Kantar Millward Brown. "This decline is either organic, as people get more familiar with the platform and it loses novelty, or commercial environment forces change."

The key takeaway from this part of the study, Stephen added, is that mobile and desktop perform equally well for digital advertising.

Is social and digital advertising worth it?

When asked if social and digital advertising was worth the time and money spent on it, Stephen said, "Yes, but a cautious yes".

"I think it’s good for advertisers to experiment with any different kind of media channel. Plus you need to be where your consumers are," he said.

It's up to advertisers and marketers to be more effective at using the medium, Ostler said. "We've found that consumers do have expectations of campaigns based on the formats used and they are quite sensitive in their reactions to it. And of course, none of these campaigns run in isolation, they are contributing to a broader cross-media execution."

Key takeaways from the study