Having just returned from vacation, The Ad Contrarian catches up on news from the last few weeks.

Facebook wants to clear something up. They are not the lying scumbags that blogweasels like myself and other nasty critics portray them to be. They are caring, gentle souls who are motivated by truth, integrity and transparency.

Facebook's VP of integrity (yes, they actually have one) says they have undertaken "a long journey' to become "by far the most transparent platform on the internet."

As regular readers know, any time you see the word "journey" you know you're in for some massive bullshit. And how do you become VP of integrity at FB? I guess you train as VP of diversity at the KKK. But let's not get ahead of ourselves here...

To demonstrate their commitment to truth and transparency, Facebook decided to prepare a report that ostensibly would show us that contrary to the published lies about how they spread misinformation and hate, what really happens on Facebook is innocent and harmless—mostly posts about baking cupcakes and cute pictures of the grandkids.

What did Facebook do when they discovered this? They did what they always do. They covered up the report. They did not release their "transparency" report . They buried it. Months later, when the Times discovered what they had done and wrote an exposé about it, they suddenly discovered it and released it.

Only in the land of Facebook do you demonstrate transparency by hiding things...

A comprehensive study by NYU and the Université Grenoble Alpes in France has found that "Misinformation on Facebook got six times more clicks than factual news during the 2020 election," according to The Washington Post.

The researchers found that between August 2020 and January 2021, posts from publishers known to traffic in misinformation got six times as many likes, shares and interactions as posts from reliable organizations. According to the WaPo, this study "is likely to bolster critics' long-standing arguments that the company's algorithms fuel the spread of misinformation..." Damn right it will.

A Facebook spokesquid said, "This report looks mostly at how people engage with content, which should not be confused with how many people actually see it on Facebook..."

Our other champion of rectitude, Google, was also in the news this week. It was reported that Google has been cheating temporary workers out of proper pay in 16 countries for nine years.

When Google managers discovered the cheating earlier this year they decided on a scheme that would hide the facts rather than tell the truth. The objective of the scheme, according to a Google "compliance" manager, was to keep the workers from "connect[ing] the dots."

In an internal email, the Google compliance manager quoted above also wrote that he was "not keen to invite the charge that we’ve allowed this situation to persist for so long that the correction required is significant.” According to reports, Google may have cheated temporary employees out of $100 million.

Apparently, at Google, the job of a compliance manager is to foster and protect non-compliance.

Back in April of 2020, as the pandemic was exploding, the CEO of Coca-Cola said the following: “We have determined that in this initial phase there is limited effectiveness in broad-based brand marketing. With this in mind, we have reduced our direct consumer communication, paused sizeable marketing campaigns through the early stages of the crisis and will re-engage when the timing is right.”

Reading this idiocy at the time I linked to it and posted the following...

A few weeks ago, Mark Ritson wrote about Coke's blunder...

In a play as old as recessions, the story is always the same. Brands cut back from advertising because they and their target consumers are facing a difficult period. One brand, however, maintains its marketing investments and reaps all the rewards as a result...In Coca-Cola’s case, arch-rival PepsiCo seized a significant upper hand and reported net revenue growth of 5% for 2020. Contrast that with Coca-Cola’s disappointing full-year reduction in net revenues of 11% for 2020.

A few weeks ago I railed against Tiffany's dumbass "Not Your Mother's Tiffany" campaign (see "Tiffany tarnishes itself with a vapid, unoriginal, insulting campaign"). I suggested they get off that loser ASAP. And they did. Their new campaign features Beyoncé and Jay-Z as celebrity spokescouple for the brand. But the new campaign got off to another horrible start. One of the first images for the campaign, shown above, has Beyoncé wearing Tiffany's 128-carat yellow diamond, which was immediately slammed as a "blood diamond" mined by Black workers in colonial South Africa.

The image also contains a painting by Black artist Jean-Michel Basquiat, who died in 1988. Many of Basquiat's friends and former colleagues were enraged by the image. "I was horrified,” said Alexis Adler, Basquiat’s former roommate. Basquiat’s studio assistant said: “They wouldn’t have let Jean-Michel into a Tiffany’s if he wanted to use the bathroom."

It's hard to overestimate the corruption and fraud on the web. According to a new study by Barracuda, the amount of "bad" bot traffic on the web now exceeds human traffic. The remainder of traffic on the web is "good" bots. In total, bots account for about 2/3 of online traffic and humans account for about 1/3. The report also contends that 2/3 of the bad bot traffic worldwide is found in North America.

If there's a worse job in business than CMO I don't know what it is. Nobody trusts them, nobody believes them, nobody wants them around. And according to a recent survey, their ability to hang on to a job is more tenuous than it's been in a decade. The median tenure for a CMO is now about 25 months.

According to an article in MediaPost, a study of 150 CEOs of large companies shows that... 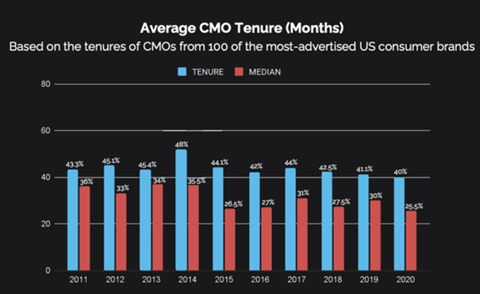 Nobody should be surprised that CEOs have no confidence in CMOs. Well, nobody who reads my scribblings, anyway. In 2015, I wrote a book called Marketers Are From Mars, Consumers Are From New Jersey.

The thrust of the book was that the marketing and advertising industries "have lost touch with consumers and are living in a fantasy land of their own invention—fed by a cultural echo chamber of books, articles and conferences in which people like them talk to people like them."

Since then, the problem has only gotten worse. This year's crop of award winning ads at the Cannes International Festival of Creativity and Putrid Rosé was heavily suffused with 'purpose-driven' advertising. 'Purpose' has become the flavor of the year in the marketing industry, which now sees its job not as selling stuff, but as reforming the world.

Sadly, the consuming public isn't terribly impressed with advertising's newfound virtue. A company called System1 has been measuring the reaction of consumers to Cannes award winners for 15 years. For the first time ever, this year's crop of Cannes award winning ads scored worse with the public than the run-of-the-mill crap we see every night on television.

“This is the first year on record where the average score of Cannes Lions winners in the US and UK is below the average score on our database of every ad,” says Jon Evans, System1’s chief marketing officer. It is a "quite shocking state of affairs.”

Shocking? Not to us.

9 Marketers, it’s time to get rid of your Covid-induced tech hangover