Amazon has made history by becoming the first brand to exceed a $200 billion valuation mark in Brand Finance's Global 500 list of most valuable brands.

The brand value of the online behemoth, led by Jeff Bezos, increased 17.5% to $220.8 billion, retaining its top spot as the world’s most valuable brand for a third consecutive year.

Tech brands snapped up all top five spots. Google, whose value shot up by 11.9% to $159.7 billion, overtook Apple to claim second place, although it was still behind Amazon by more than $60 billion.

Retaining fourth and fifth places respectively, Microsoft's brand value was down 2.1% to $117.1 billion, while Samsung’s value increased by 3.5% to $94.5 billion.

The highest-ranked British brand is EY, one of the "big four" professional services companies – up one spot from last year to 66th, with a 2.1% increase in brand value to $23.7 billion. Shell, considered a British-Dutch company but ranked as Dutch in Brand Finance's league, came 23rd with a value of $47.5 billion, up 12.3% year on year. 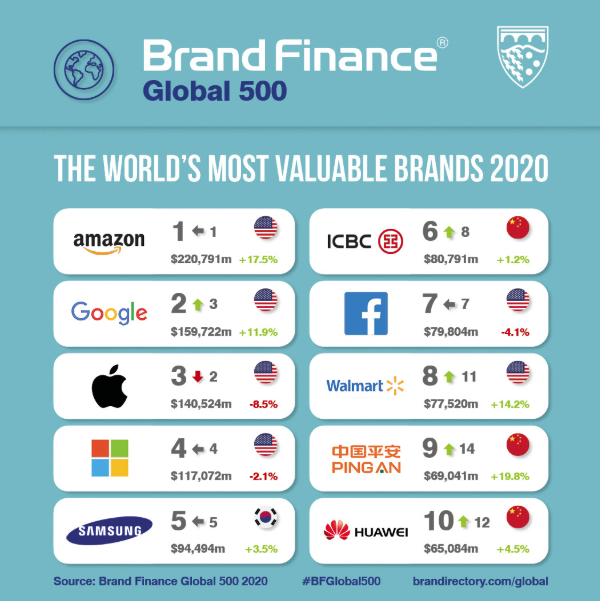 David Haigh, chief executive of Brand Finance, commented: "The disruptor of the entire retail ecosystem, the brand that boasts the highest brand value ever, Amazon continues to impress across imperishable consumer truths: value, convenience and choice.

"Today, Amazon’s situation seems more than comfortable, but what will the roaring 20s hold in store?"

A far cry from Amazon’s success is online marketplace eBay, ranking 234th place. Its brand value has continued to plummet, falling 9% to $8.2 billion, as Amazon has branched out from retail to cloud computing, artificial intelligence and digital streaming.

The ranking uses factors including marketing investment, familiarity, loyalty, staff satisfaction and corporate reputation to produce a financial measure of how much value a brand contributes to its owner.