"Speed in all senses of the word" is becoming a competitive advantage in marketing services, Sir Martin Sorrell has claimed as his company S4 Capital grew by just over a third in the first three months of 2019.

S4's first-quarter earnings showed that the parent company of MediaMonks and MightyHive grew revenue by 38% to £40.93 million (US$53.81 million), or 35% in like-for-like revenues in constant currency.

Sorrell, S4’s executive chairman and former WPP chief executive, is intent on growing the global presence of MightyHive, an agency with headquarters in San Francisco and offices in New York, London, Toronto, Singapore and Sydney. In the last quarter, new programmatic media offices were established in Tokyo and Montreal, with  "coverage initiatied in Paris and Milan", S4’s earnings report added. 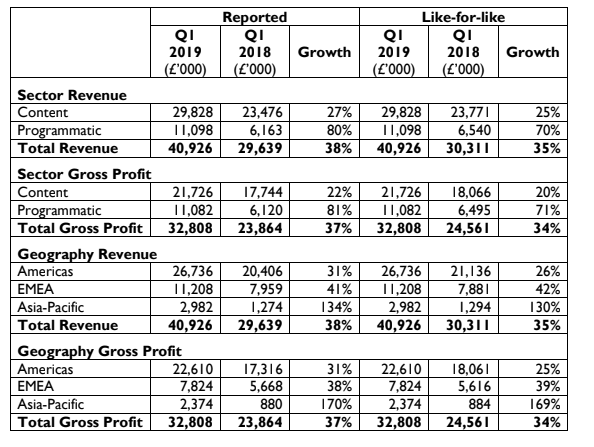 Meanwhile, Sorrell said new-business activity is "frenetic" and that the company’s pipeline is twice the level of last year—a claim he has made before.

S4 is working on two "major" assignments with a motor manufacturer and a tech client, the identities of which were not disclosed because of a non-disclosure agreement.

Speaking from Singapore, Sorrell added: "Speed in all senses of the word is becoming a crucial competitive advantage and differentiator, and we don’t have to set up an institute to learn that. We just listen."

S4 Capital ‘growing in line’ with tech giants as it ...